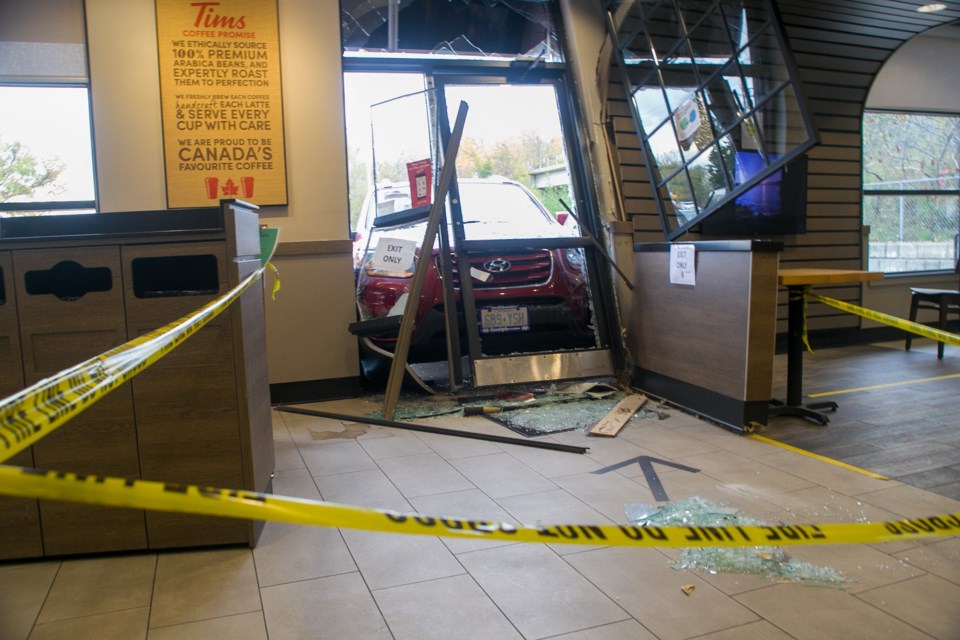 A view from the inside after an SUV crashed through doorway at the Tim Horton's location at the corner of Imperial Road and Wellington Street Thursday afternoon. Kenneth Armstrong/GuelphToday file photo

Guelph Police Service says there were no injuries but major damage as a result of an SUV crashing into the side door of a Tim Hortons in Guelph yesterday.

Const. Kyle Grant said the approximately 50-year-old woman driving the SUV was not injured and no one inside the building was harmed at the time of the incident.

Grant said there was 'major damage' to the building, located at the corner of Wellington Street and Imperial Road.

“A building inspector from the city was called out in order to check the safety of the building,” said Grant.

The investigation is ongoing said Grant and no charges have been laid.

Incidents such as this could potentially result in charges being laid, said Grant, but often they are accidental.

Because it occurred on private property, Highway Traffic Act citations don't apply. Any potential charge would be a criminal charge.

"Really the only thing you could charge someone with there would be potentially impaired driving or if their actions were dangerous driving, but there is a pretty high threshold for that,” said Grant.