CEBL doesn't plan on going anywhere but up 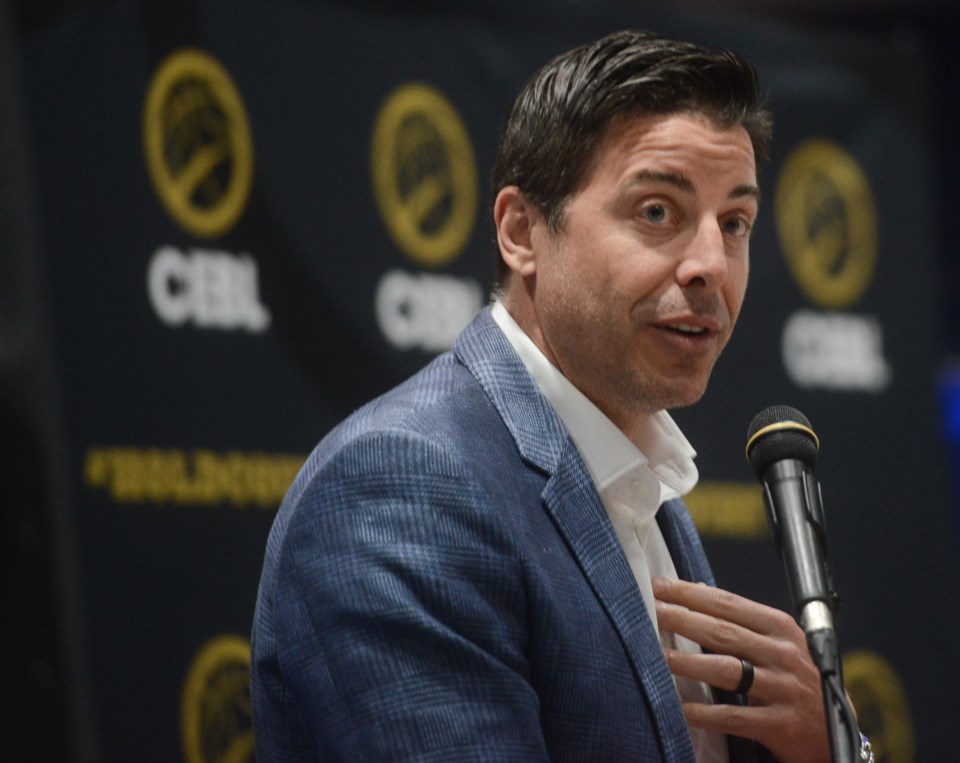 Mike Morreale, CEO of the Canadian Elite Basketball League, speaks to media just prior to the league's launch in 2018.Tony Saxon/GuelphToday file photo

After completing its second season with a reduced schedule with all games played in a single location, the Canadian Elite Basketball League knows there is the possibility of more of the same in 2021 and it’s ready for that.

“We've got kind of three strategies,” CEBL commissioner and CEO Mike Morreale said during a phone interview. “Point A is business as usual, but I feel that may not be the case. Part B is in-market, but maybe at reduced capacities. We feel that based on our operational expenses and budgets, we can make it work in basically all of our facilities at 30 to 50 per cent capacity.

“And then there's option C which would be let's revisit the hub model and maybe expand that to a more regional model as well. But again, is that in front of fans, a select number of fans or is it not? These are things that we now get to sit back and watch a bit and watch people like the Guelph Storm or the CHL navigate the next little while and maybe learn some things about what things will look like come in May.”

The league added the Ottawa BlackJacks to lift its roster of teams in 2020 to seven including the Guelph Nighthawks. More expansion is on the horizon, but it may be a couple of years until any new teams begin league play.

“I plan on announcing at least one or two expansion or existing team sales in 2021, but I don't anticipate anything until 2022,” Morreale said. “We were moving toward 2021 in a pretty profound way, but then COVID hit.”

Would the Nighthawks be one of the franchises that were sold?

“Guelph's a possibility, but there's nothing at the moment,” Morreale said. “Certainly there's a handful of other teams that are more headed down that path, but every market was built to be sold to local ownership groups so they could take it the next 20 yards. We'll take it the first 80 and then they can run with it from there and really localize their teams.

“My hope is still out there that there are potential suitors for Guelph. I think it's a tremendous market and I think there are a lot of basketball people in Guelph that want to see this be around for a long time. We'll do it corporately, but at the same time I'd love to find those people. I've reached out to some and some have reached out to me, but right now it's still in the preliminary stages, but we're definitely looking.”

As for the league’s Summer Series at the Meridian Centre in St. Catharines that counted as its second season, the CEBL felt it was necessary to put a product on a floor somewhere and that it would’ve been disastrous not to play.

“I think it was incredibly important (to play),” Morreale said. “We came off a really successful 2019 and had a tremendous offseason with the addition of Ottawa and the addition of about 75 new players, all of high calibre and then, of course, our CBC partnership. We knew we had some momentum and we also knew that sports is a bit of a fleeting business. If you're not able to stay relevant or be seen, it's hard to stay engaged so it was incredibly important.”

The league made the decision to go ahead with some sort of season pretty quickly, but actually getting to the point where games could be played took a bit of time and work.

“It was a Herculean effort, to say the least,” Morreale said. “It was almost like you were chasing your tail a little bit because it's so brand new to everyone, government included, medical officers, staff, everybody. We engaged with as many people as we could. We just followed the path along the way. Sometimes there were very steep hills to climb and sometimes there were reasonable ones. It was an effort from I would suggest about a week after everything kind of shut down mid-March. Closer to the end of March we just made a decision and jumped right in.”

However, the games were played with no fans in the stands.

“That's the downside, that we weren't able to be in market and really provide our product in front of our traditional fan base,” Morreale said. “But I'd say the end result was significantly better because the exposure we received by doing it the way we did really allowed us to kind of get a sizeable return on our investment and really create that brand awareness that I'm not sure we would be able to replicate even during a traditional season.”

The exposure came through the league’s partnership with the CBC as some games were broadcast nationally on television and all games were shown on the internet on CBC Gem.

“I don't think we would have done or could have done the Summer Series without that relationship,” Morreale said. “That was incredibly important. Existing in a bubble and playing games and just sending out boxscores is great, but seeing our product, especially as a new league, was way more important than that. That was a really, really special part of what we did.”

There was also a bit of an impact obtained from getting its season started relatively quickly. Games started July 25 and ran until the final on August 9.

“Certainly in Canada we were the first league to return, even before the NHL,” Morreale said. “That afforded us a little bit of the limelight, a little curiosity at the beginning. As the NBA started up and the NHL started up, there was a lot of buzz about that, but we kind of rode that wave as well. Being the first, we got out ahead of the curve and people at least recognized what we were doing and we just built on that from there.”

Some heavy lifting helps make local weightlifting tournament happen
Nov 6, 2020 3:00 PM
Comments
We welcome your feedback and encourage you to share your thoughts. We ask that you be respectful of others and their points of view, refrain from personal attacks and stay on topic. To learn about our commenting policies and how we moderate, please read our Community Guidelines.