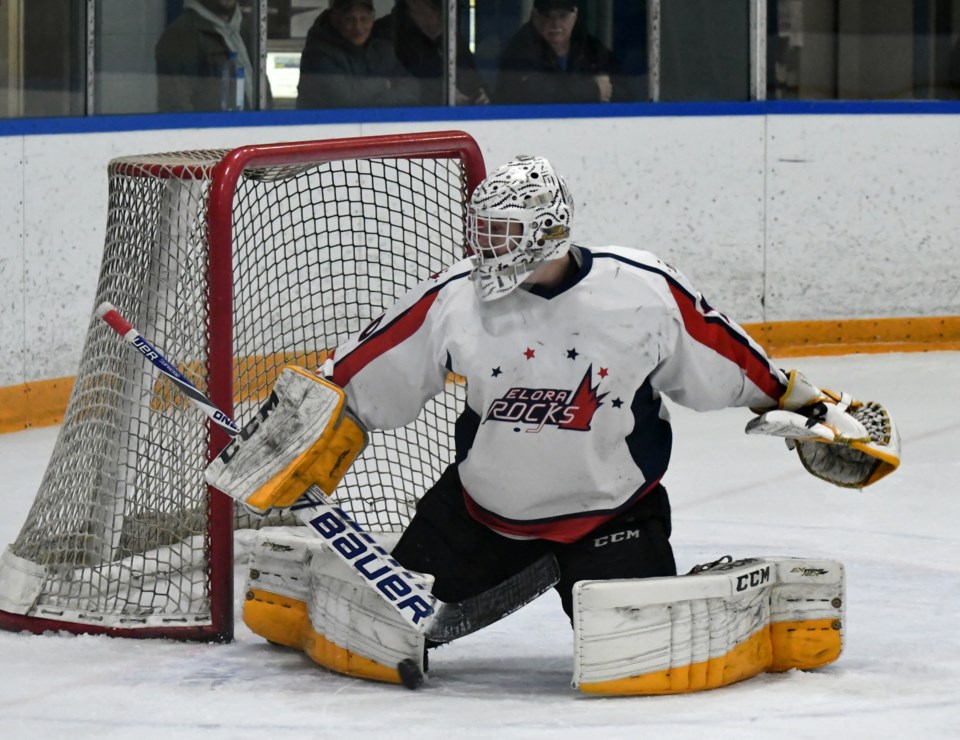 Goaltender Colin Dunne of the Elora Rocks stops a shot in Western Ontario Athletic Association senior men's hockey league A semifinals in February, 2020. When the Rocks next take to the ice they'll do so as members of the new Western Ontario Super Hockey League. Rob Massey photoRob Massey

When the Elora Rocks return to the ice for their next hockey season, it’ll be in a totally new league.

Mitch Scott and Rich Wigmore, both former players in the WOAA senior loop, have taken over the running of the team from George Anderson, the team’s general manager for years, and are taking it in the new direction. Scott will be the general manager and Wigmore the president.

“George is still going to be a part of it,” Scott said. “It's just that there were a lot of things going on on his end and his work schedule has changed. It's been him and a couple of executives, retired executives, that have been doing the Elora Rocks for years and it was time for a change.”

The Rocks are to be one of eight teams in the WOSHL for its first season, the others already confirmed are the Alvinston Killer Bees, Langton Royals, Strathroy Jets, Stratford Irish and Tillsonburg Thunder. Like the Rocks, Tillsonburg’s also moving over from the WOAA league. Two other teams are to be announced.

“The league that Elora was in before, both Rich and I have played in it and it's more of an old-school mentality on how things are run,” Scott said. “There's not a whole lot of progressiveness to the league and we really believed in what this new WOSHL is trying to do and trying to accomplish.”

The WOSHL is to livestream all its games and there won’t be player boundaries for the teams, at least not to begin with. The WOAA’s boundaries meant that players who lived in Fergus were considered imports for the Rocks.

“The rule was made in 1970 and it was never updated,” Wigmore said. “It still was and still is a small-town league. Back in the '50s and '60s when they started, it was all local guys. Beyond that, they didn't want to have guys outside of a 15-kilometre or 10-kilometre radius. Whereas we know now that that isn't even reasonable.”

The league is big on making the spectator experience an enjoyable one.

“One of the mandates for having a team in the league is you have to have four event nights per season,” Scott said. “It's a 22-game season so we have 11 home games and of those 11 home games at least four of them have to be a theme night. So whether or not it is giving back to the Cancer Society and having a Cancer game, a big fundraiser, that's one of the things that we're looking at doing.”

The Rocks have also hooked up with Elora Riverfest and hope to have live bands at some of their home games.

“It's really making it more than just a hockey game,” Scott said. “The league's mentality is yes, we want to put the best hockey product on the ice, but at the same time if our fans leave the game and they don't really remember what the score was, at the end of the day it's not a big deal because it means they had a whole lot of fun and there's other stuff going on for them as well aside from just the hockey.”

On the hockey side, the Rocks and their new league mates have started recruiting players.

“Based on our age, our demographics and our networks and having been recent in a league, we have good connections with players that we are communicating with, but we're not drifting away from our plan of building the team foundationally from the bottom up and having the young guys and the local guys,” Wigmore said. “(We’re) also keeping in mind that we need that veteran presence, guys that have been around the block.”

“I don't mean to brag, but we're going to have a really good team,” Scott said. “The guys that we've talked to, the veteran guys, we're so excited about the prospects we have of them coming in and the young players that the Rocks already had are only going to grow more with the team. We're really excited about what's going to happen and I think it's going to bring a whole new sort of fresh blood and fresh perspective into Elora hockey.”

With the pandemic basically cancelling hockey in the province last winter, players are anxious to get back on the ice and spectators are itching to see some live games.

The pair is clear that they have no plans to move the franchise out of Elora.

They hope to have a head coach in place soon.

If it is safe to do so, the Rocks hope to hold a tryout camp at the University of Guelph’s Gryphon Centre in July and hope to have a playing roster settled by the end of August.

“We're trying to lock in some of our key players, but there are going to be roster spots available,” Scott said. “I can't believe how many people we've had reach out to us already about trying out.”

The Rocks will also have a bit of a different look when they resume play.

The league’s regular season is expected to start around the Thanksgiving weekend.