Perceived slight from male athlete continues to reverberate for Lisa Wedel
May 15, 2021 11:00 AM By: Rob Massey 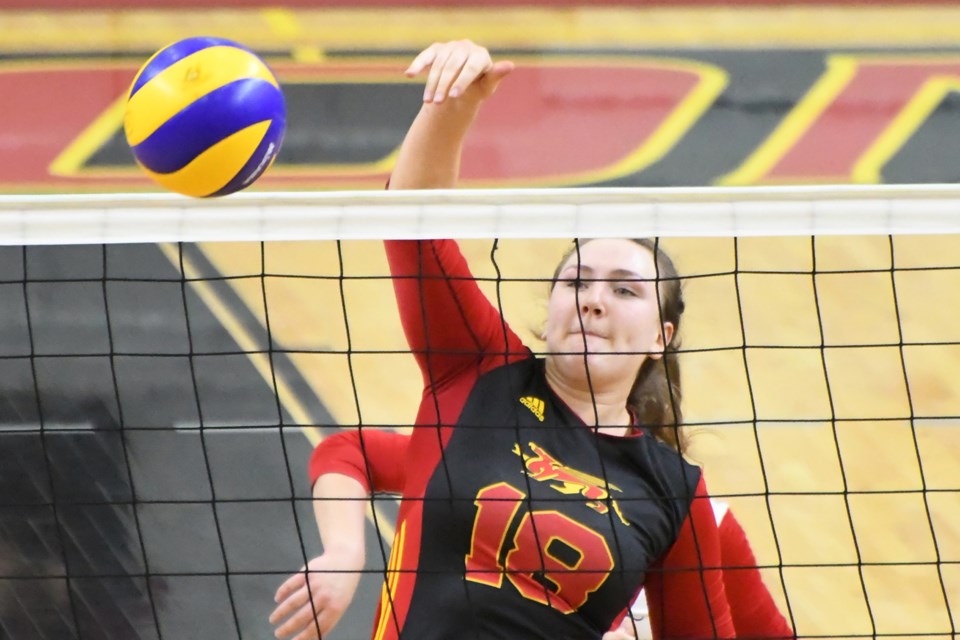 Guelph native Lisa Wedel of the Guelph Gryphons knocks the ball over the net during Ontario universities women's volleyball league play during the 2019-2020 season.Rob Massey photo

Every time Guelph native Lisa Wedel sits at her computer, she sees a phrase that she uses as her motivation in sports in particular and life in general.

Calm down, you're playing a women's sport in Canada.

Wedel, a co-captain of the University of Guelph Gryphons women’s volleyball team, wrote it onto a sticky note a couple of years ago in the midst of the Gryphons’ OUA bronze-medal campaign, their first medal since winning silver eight years earlier.

What prompted Wedel to put that sticky note there?

“Anyone who knows me has heard that story if I get a chance to tell it,” she said.

Here’s the abridged version: Wedel and her teammates were setting up the Guelph Gryphons Athletic Centre for a practice session that happened to follow a U of G recreation league basketball match. Nothing unusual there except one of the recreational players decided to hang around a little longer to shoot baskets during the opening four or five minutes of the varsity volleyball team’s practice slot. Wedel had been the first to approach him to let him know the volleyball team would be practising and using the entire gym, but it took a stern talk from volleyball coach Paul Funk to get the hoops player to leave.

“Finally he stopped shooting,” Wedel said. “At that time I had a hand injury and I was taping it near the door. As he was leaving, clearly he wasn't happy at having to leave, he looked at me and said 'Calm down, you're playing a women's sport in Canada' and then he left. Good thing he left fast because if I'd had more reaction time I probably would've said something I regretted.”

Wedel, though, couldn’t stop thinking about that comment and as practice progressed, she got angrier and angrier, mainly at herself.

“Why did that make me so angry? I realized that it was because subconsciously I was buying into the idea that it was an insult being a woman playing a sport in Canada,” she said. “Nothing that he said was wrong. I am playing a women's sport in Canada, but the way he said it and the way I took it – I took it as an insult. I was so ashamed that I believed that. Wow, here you are being a female athlete and you still believe what other people believe, the traditional idea of what women are capable of. You still believe that.

“I had to change what I was thinking and what I know I am capable of so I wrote down what he said on a sticky note on my computer. I am taking this man's insult as a compliment.”

“That's a tough thing to be motivated by, but I get it,” said Allison Sandmeyer-Graves, the chief executive officer of Canadian Women and Sport. “You hope that this kind of mentality is certainly going toward history, but it's still a belief held by too many.

A lot of times we internalize those messages. We begin to believe them ourselves and so when someone does hit you with a sexist comment, it can sting in the sense that it can sort of reinforce these unconscious believes that we hold that 'OK, maybe I am lesser than because I'm a woman.'

“But you saw her very quickly go 'No, that's not OK.' Sometimes the initial reaction is 'Is he saying something that is true?' Then you have to kind of check in with yourself and go 'No, that's not true.' That may be what we're told and that may be what some people believe, but that is not the truth. But I think it would be very difficult not to take that comment personally and not to find it really upsetting.”

With females dropping out of sport in adolescence at a higher rate than males, Canadian Women & Sport began its She's Got It All national awareness campaign to challenge traditional mindsets on how women and girls experience sport.

The 21-year-old Wedel started playing volleyball in Grade 8. She had been a rep soccer player, but gave that up when she continued with volleyball as a Guelph Junior Gryphons club player and also with the perennially strong John F. Ross Royals high school teams.

“Doing this campaign, my role in the campaign was to put a face and a name to the statistic that one-in-three girls drop out of sport versus one-in-10 men,” Wedel said. “Obviously, I'm not one of the ones that dropped out, but boy were we tempted. People who were my peers in high school have dropped out.

“I'm here sounding the alarm,” Wedel said. “There's a problem, we need to identify it so that we can solve it because you can't fix something that you don't know is broken.”

The attitude between men and women in sport can be seen at many universities in the country where there are more men’s sports than women’s. The University of Guelph has the exact same number of varsity teams for both genders – 15. Both have varsity squads in basketball, cross country, golf, hockey, lacrosse, nordic skiing, rowing, rugby, soccer, swimming, volleyball, track and field and wrestling. Men also have baseball and football while women have field hockey and figure skating.

However, starting times of games in the sports (basketball, soccer and volleyball) where there can be men-women doubleheaders, the women always play first. The U of G experimented with switching the times around a few years ago, but went back to the traditional women-first format.

“I think Guelph has been really pushing on this and I'm sure that there are still gaps. Nobody's going to be perfect on this and certainly it's something that takes time to correct,” Sandmeyer-Graves said. “We're talking about decades and decades of decisions and they're not going to all be improved overnight, but I do know that (U of G athletic director) Scott (McRoberts) has been really determined on this front and that progress is happening for sure.”

What can be done to start changing people’s views of women in sport?

“For me the biggest barrier is public perception, absolutely,” Wedel said. “Why are we settling for mediocrity when Canada can be known for the women's athletics program and athletics in general because sport is a human thing, not a man thing or a woman thing. How do we change the perception and not be OK with where we are at?

“It's the little things. If you're a parent, if you're a sibling, if you're a coach, pay attention to how you are talking with your daughter, your sister, whatever -- with the girls in your life who are thinking of going into sports or are in sports. The conversations on the ride home, what are you talking about? Are you encouraging them to stay in sports? Are you talking about the value of sports? Or are you just going to let it go by the wayside?

“If you have the opportunity to go support a women's team, do so because then you are proving to them that they are just as capable as men and they're not just rep players and men are high-performance athletes. You can be either for either gender.”