Guelph's Jacob McWhirter has a big season down south 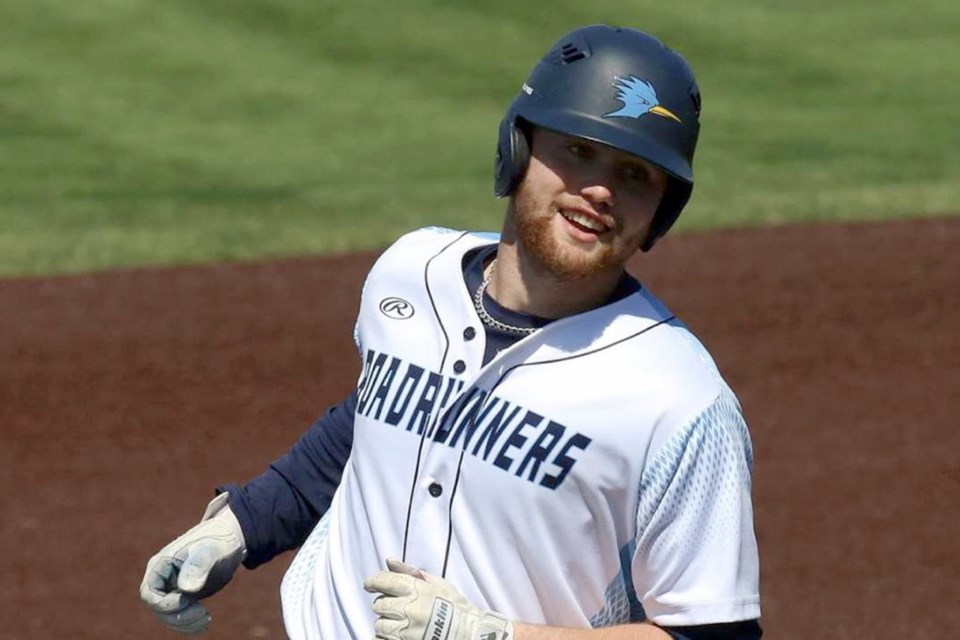 Jacob McWhirter of Guelph smiles as he rounds a base during one of his school-record 14 homers for the State Fair Community College Roadrunners of Sedalia, Missouri. The Bishop Macdonell CHS graduate is to play for the Sedalia Bombers of the MINK Summer Collegiate Baseball League this summer.Submitted Photo

Jacob McWhirter of Guelph is wondering how to top his recently-completed freshman varsity baseball season with the State Fair Community College Roadrunners of Sedalia, Missouri.

In 40 games with the Roadrunners, McWhirter clouted 14 homers, tied for fourth in State Fair’s conference. He also had a .363 batting average, scored 33 runs, drove in 43 and hit into a single double play all season.

That performance got him named first-team all-region as a designated hitter in the National Junior College Athletic Association’s Region 16. Two of his teammates were second-team all-region.

“The 14 home runs, that's a school record for a single season and I was named a Region 16 all-first team. I couldn't finish the season better,” McWhirter said. “I set a record and I made the first team. That's pretty good.”

The 19-year-old Guelphite played in the Guelph Minor Baseball Association while he was in Grades 9 and 10 at Bishop Macdonell Catholic High School where he also played on the school’s baseball team. For Grades 11 and 12 he played with elite squads, first the Fieldhouse Pirates of Mississauga and then the Ontario Blue Jays of Toronto. Sedonia scouted him when he was playing with the elite teams.

“I had a couple of visits down in the Missouri area – Missouri, Oklahoma, Kansas,” McWhirter said. “I came in an on-person visit right before COVID hit and I just really liked it here. It was smaller and there's still a lot to do. The living situation is really good. In most colleges you get a two-bedroom dorm. Here I get a full apartment with two other roommates.”

When McWhirter joined the Roadrunners last fall after a 17-hour drive from Guelph – Sedalia is located about an hour and a half west of Kansas City – he felt at a bit of a disadvantage at first. He’d taken a year off school and then because of the pandemic and the lack of sports in Ontario, he’d ended up taking most of a year off baseball, too.

“Last summer I didn't play any ball because of COVID and Canada was locked down,” he said. “It was tough when I came down here in the fall because all of the guys were playing in the summer so they were kind of fresh where I hadn't played in almost a year. It was definitely a challenge.”

He also had to get back into the routine of going to classes.

“These guys, when I was taking my off year in 12-plus, these guys were in Grade 12,” the sports management student said. “Their school system is a year behind. I was a year off school so just getting back into school was a whole new thing for me – going to classes, getting up. These guys were already going to classes.”

Skipping school was not an option.

“It's up to you, but you want to go because our coaches know everything,” McWhirter said. “If you miss, they know.”

Cutting classes could also hinder moving on to the next level.

“You've got to get up early and you can't miss those classes,” he said. “Our coaches know about it but also the schools at the next level know about it if you're missing classes.”

For his first season with the Roadrunners, McWhirter had to get used to playing a new position. He’d played first base and third base in Ontario, but had to switch to right field to get some playing time and he also saw duty as the team’s DH. Usually hitting sixth in the lineup, McWhirter played 21 games in right field, 18 at DH and made an appearance as a pinch hitter in one game.

“You've just got to hit to get on the field. If you hit you're going to play,” he said. “Our first baseman was a sophomore who had a really good freshman year.”

The switch to the outfield wasn’t a big deal for McWhirter, thanks to the amount of practising the Roadrunners do every week.

“Every day I was getting practise in the outfield,” he said. “It's not like in Guelph (where) I'd have one practice in the outfield and then I was in a game. I had a whole fall to practise every day so when I went out there in the (spring) I was really pumped to go. I like it out there now, I really do.”

The regular weekday routine saw McWhirter get up at 5:30 a.m. to be ready for an hour workout that started 30 minutes later. Then he had classes until 10 a.m., an hour of open hitting, another hour of class and then a two-and-a-half-hour practice.

“From six in the morning to 4:30, it's full baseball and school,” he said. “Then when you get off at 4:30, you've got homework, dinner. You're probably done about 7, but you have to remember that you've got to be up at 5:30 so you've got an hour, two hours of free time maybe. And that's every day.

State Fair usually plays four games a week, a pair of doubleheaders featuring a seven-inning game and a nine-inning game and the trend is also to play the same team for those four games, once on each team’s home field.

While others might have been surprised by the season McWhirter had, he certainly wasn’t.

“When you get down here, it's a lot different than playing for the (GMBA) Royals,” he said. “For the Royals you may practise once and you play two times a week. Here you're practising every day. You're swinging every day. You're working out every day. Baseball's like a job down here. With all that practice I felt really good and when I came back (to Guelph) in the winter I went to Peak Performance with Andrew (Karkoulas). I was always swinging and I've always been a really good hitter. I figured with all that additional time and free time hitting, I knew I'd have a really good season.”

He’ll stay in Missouri this summer to play for the Sedalia Bombers of the MINK Summer Collegiate Baseball League. The eight-team league’s season starts at the beginning of June and its playoffs are slated to begin at the end of July. Each team is to play a 38-game regular season and the Bombers are to use the 1,000-seat Liberty Park Stadium in Sedalia as their home. It’s the same stadium used by State Fair College for its home games.

McWhirter will also continue with his schoolwork this summer.

“I'm taking two summer classes,” he said. “Since I'm going to be down here I might as well get that extra credit. Hopefully if I do good I’ll get my GPA up. Besides playing, there's no other option. I don't want to just sit around when I'm not playing.”

And that will prepare him for his second and final season with the Roadrunners as he hopes to have decided on an NCAA D1 school by the fall.

As far as his next season with State Fair, McWhirter knows what he has to do to improve on his freshman season.

“I've got to keep working,” he said. “After having the year that I had I feel the expectations get higher. Getting that first-region all team you want to go back and get it again, but that's added pressure on you to get it again.

“And 14 home runs, I set a big mark. That's not a light number to break, but I think with the work and this summer – I'll be playing all summer and I'll be playing all fall so I'll be even warmer going in. I think I'm going to get to the 20 mark next year.”