Former U of G Gryphon Zach McFadden is set to begin his pro journey with Kalmar HC of the Swedish Hockeyettan league
Sep 11, 2020 12:00 PM By: Rob Massey 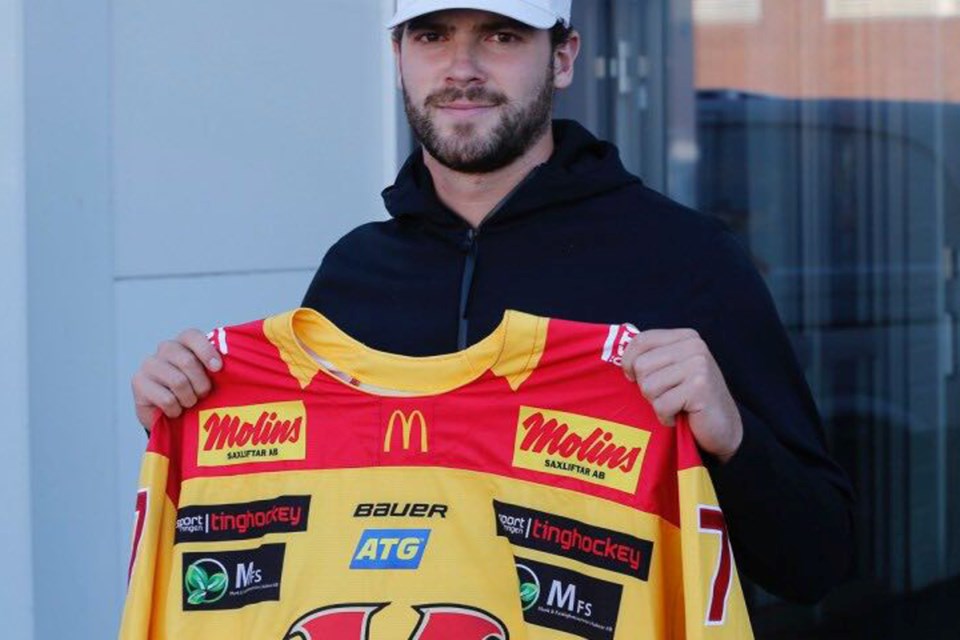 Defenceman Zach McFadden holds up the Kalmar HC jersey he's to wear this season as the Guelph native is to begin his professional hockey career in Sweden. Submitted photo

Guelph’s Zach McFadden is anxious to get his professional hockey career started.

About six months after playing in the final Canadian university U Sports men’s hockey game of the season, a national quarter-final loss to the St. Mary’s Huskies, McFadden’s now in Sweden embarking on his first pro season with Kalmar HC.

“My first (preseason game) will be on the 16th,” he said during a Messenger chat as he sat with some teammates in a restaurant in Kalmar. “When I first came here they had one the next day and I just didn't think it would be a good first impression for me to step off a plane and then just get right into hockey because I haven't played a game in six or six months.

“We have a game on the 16th against our biggest rival (Nybro Vikings). I'm excited.”

While McFadden is awaiting his preseason debut, he has had around half a dozen practices with his new squad since arriving in Sweden about two weeks ago.

“It's been really fun, actually. The hockey's really intense,” he said. “The practices are quite intense, too. There’s tons of skating, a lot of working out and lots of running, too, but I just think that's what pros do. You have to work like a pro because you're making money for hockey, too, so if you work like a pro, you get treated like a pro here, which is nice.”

All in all, McFadden has found that the practices have been pretty similar to the ones he had at the U of G.

“It's really not that big a difference because at the University of Guelph our coaches really prepared us for pro,” he said.

“They really worked us hard and they made sure we were intense all the time. We worked out just as hard as we do here. I think that Camper (head coach Shawn Camp) and also (associate head coach) Justin (Stevens) really, really prepared us for pro which is why I think it's a little easier for me, too, just because of the way we practised, the way they taught us and the values they instilled in us. It's been a pretty easy transition. The only thing is that the Swedes skate so hard and so fast.”

Another big plus of playing with the Gryphons was playing home games on the Olympic-sized Gryphon Centre rink.

“It's a big bonus,” McFadden said. “That was one of the big selling points that (Kalmar’s) GM (Roger Nystrom) said that I had. He realized that I could cover a lot of ground on the ice, too, that I wasn't just fast in a smaller rink and that I was a really good skater in a big rink, too. That was big for him.”

Playing at the Gryphon Centre also gave McFadden the insight into how the game is played on the larger ice surface.

“(Nystrom said) it's such a big advantage that I played there for four or five years because I know how the game works because it is such a different game from playing on a regular-sized rink,” McFadden said. “The speeds are so fast and they're such good skaters that I'm kind of getting adjusted to that. Compared to U Sports, it is similar in speed, but they can just skate forever, too, which is the biggest difference I've found.”

Kalmar plays in the Hockeyettan, Sweden’s equivalent of a North American league that McFadden said would be found somewhere between the American Hockey League and the East Coast Hockey League.

In Canada and the U.S., the NHL is number one, AHL two and ECHL three. In Sweden, the Swedish Hockey League is number one, Allsvenskan two and Hockeyettan three, but many of the players don’t necessarily approach it that way. While the SHL would be the main goal if they wanted to stay and play in Sweden rather than going overseas to play in Canada or the U.S., the Allsvenskan isn’t necessarily their second choice in Sweden.

The Hockeyettan has 47 teams divided into four conferences. Kalmar is in the South Conference.

Kalmar, a city about a third the size of Guelph, is located on the coastline of the Baltic Sea in the southeast of Sweden. It’s about a five-hour drive north to Stockholm and a four-hour drive west to Copenhagen in Denmark.

Home arena is the Iffehallen and it holds about 1,500, about 300 more than the Gryphon Centre.

“It's pretty nice,” McFadden said of the Iffehallen. “It's a little more intimate, too, because it is a European rink. The ice is bigger, which means smaller stands. I've played in the OHL and the QMJHL where when you play Quebec and there's 50,000 fans in the stands. It almost sounds like there are 50,000 fans in the stands (here), which is what I've heard from these guys. The supporters are so intense and the other team's supporters, they also come to the games, too. I guess it's almost like a soccer atmosphere in there – I should say football, I guess.”

Thanks to the coronavirus pandemic, McFadden had a little more time to work out and prepare for the upcoming season.

“I've been able to put a lot more focus into hockey and also my body as well because I haven't had a summer job this year because of COVID, which is unfortunate from the money standpoint, but I think it was very positive mentally on myself and I got to reset and I got to kind of sharpen my mind and especially my body, too.”

He also got a lot more work done during his on-ice sessions once they were held.

“With the skating delayed too and with a smaller group, I guess you get more reps, too,” he said. “You can work on stuff you wouldn't work on if there were 25 or 30 guys on the ice, too. It was a really different training summer, but I feel like it's been almost an advantage because it's more on yourself.”

He also stresses that the summer skating at the Gryphon Centre was all done in a safe manner.

“It was once a week with my brother (Josh) and a few Gryphs,” McFadden said. “The University of Guelph did a really good job creating precautions to make sure that we were safe on the ice. There was no scrimmaging at first and we were wearing masks, too. I think as a group of young men, too, there's kind of a stigma against the younger group that we don't take this as seriously.

“We were representing the University of Guelph and also ourselves and we wanted to show the people around the rink that we were really serious about it. We don't want COVID to penetrate Guelph or the people at the university so we took every step and I think it worked out. Everyone was really nice to one another and we all gave each other space which I think is the key.”

When his season in Sweden starts, McFadden won’t be giving much space to his opponents during a season in which he’ll be asked to fulfill a different role than the defensive one he had with the Gryphons that saw him net six goals in four seasons.

“I'm thrilled,” he said. “One of the main points that our coach (Andreas Holfelt) said is that he wants me to be physical, but also be big in the game, too. I was more defensive at the University of Guelph, but now it's time to show that I can play offence and I can score goals.

Young speedster has a great summer on the racetrack
Sep 2, 2020 8:00 PM
Comments
We welcome your feedback and encourage you to share your thoughts. We ask that you be respectful of others and their points of view, refrain from personal attacks and stay on topic. To learn about our commenting policies and how we moderate, please read our Community Guidelines.