NCAA golfer Anthony Occhiuto keeps chasing his dream of one day playing on the PGA Tour
Nov 21, 2020 10:00 AM By: Rob Massey 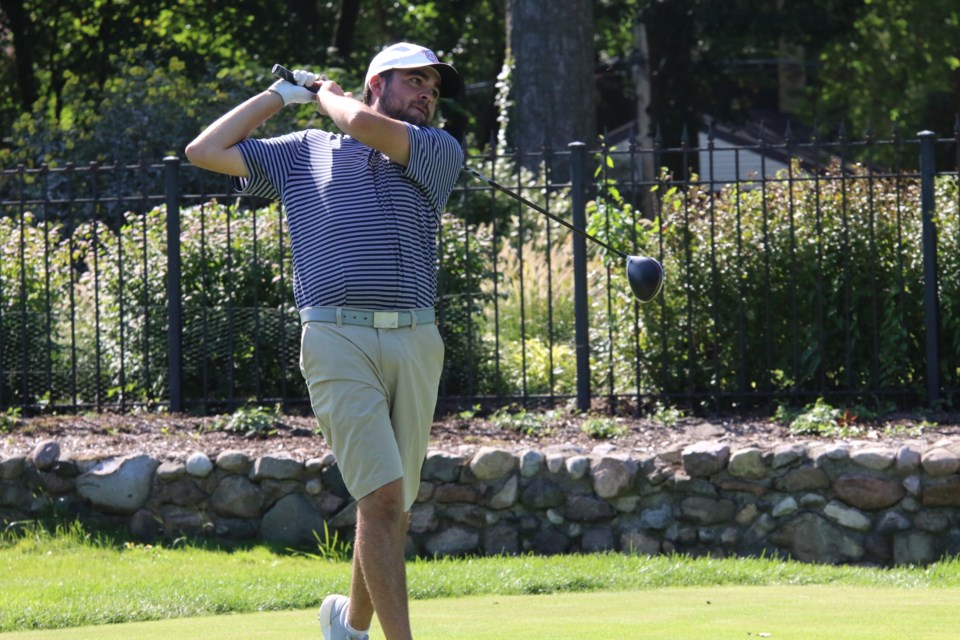 Guelph's Anthony Occhiuto of the University of Detroit Mercy watches a tee shot during NCAA golf play. Occhiuto scored a win with a school-record tournament score a little over a year ago and is waiting for a return to university tournament play. Detroit Mercy photo

With the drastic reduction in sports events due to the pandemic, every athlete has had to make the best of their situation.

For Guelph golfer and third-year University of Detroit Mercy student Anthony Occhiuto, that’s meant coming up with games to play during his practice rounds.

“It definitely has been a lot different practising because you're always told to practise with a purpose. As a kid I've always practised for a tournament so I've kind of had to make practice fun again in a sense and create games for myself when I'm practising to kind of keep me motivated and keep goals being set for myself so it wouldn't start to feel like something I didn't enjoy to do anymore.”

And he has a favourite one.

“I play a thing called worst ball,” the 21-year-old said. “I hit two shots every time and then I take the worst shot of the two and I see how well I can score. That's basically what I've been doing and I do that about twice or three times a week and I just try to improve every time.”

Like the classes the communications major takes online, things are different now. And the shutdown came suddenly.

“In March last season, we went down to Florida for a tournament and it was when it just started to become a thing, COVID started becoming a thing,” he said. “We played in the tournament and as soon as we got on the plane, we started hearing things that things might start shutting down. It started becoming a real conversation. As soon as we landed we got an email saying that sports were done, school was all online and you're to go home immediately. Pack up and leave.”

That tournament was the Orlando Invite, the first of what was supposed to be a five-tournament spring season. Detroit Mercy finished sixth in the team standings and Occhiuto was tied for 41st.

Occhiuto has been at home since, preferring to stay in Guelph and doing his schooling online.

A little over a year ago, in September of 2019, Occhiuto became an NCAA Division 1 golf tournament champion when he took top spot in the NKU Collegiate Classic at Union, Ky., with a three-round score of 204, breaking the school single-tournament school record that had been set 14 years earlier by a stroke.

“I guess I really love Kentucky,” he said. Occhiuto had finished second in the same event a year earlier. “The course that I won at is in the same area, but it's actually a different course. It's something about the area that I must like, I guess."

For Occhiuto, NCAA golf has turned out to be just as advertised.

“Golf wise, the tournaments are just insane. The competition is unbelievable,” he said. “You have to go low. It's what you see on the (PGA) Tour. You can't win by shooting bad scores. You can't. If you want to compete, you have to be on top of your game. "Fortunately I have had during the last two years those weeks where I have been on top of my game and I've done well.”

Occhiuto was the Horizon League’s Freshman of the Year for the 2018-19 season when he led Detroit Mercy with an average score of 75.38 per round as he played in eight of the team’s 10 tournaments. He lowered his seasonal average to an even 74 in all six tournaments Detroit Mercy got in before the shutdown.

This summer he played the majority of his golf at Cutten Fields, where he’s a member, and at the Victoria Park East Golf Club, where he was a summer student.

“For tournaments it keeps it fresh for me because I'm playing basically a different tournament every week so the last six or seven months have kind of been the same two courses, but my dad and I have tried to travel around and play some different courses – some courses that I've never really played,” he said.

Occhiuto also felt the shutdown might be a positive thing for his golf game.

“It's been a very good summer for me practice wise with my golf coach over here in Canada, Scott Cowx,” he said. “I've definitely gotten a lot of hard work done with him and definitely fine-tuned some things that maybe I wouldn't have had time to fine-tune if I didn't have this time at home and away from tournaments as well. This hasn't completely been a negative.”

He also feels he’ll be ready to hit the ground running when tournament play does return.

That also puts Occhiuto in a good position to pursue his ultimate goal of becoming a PGA Tour member. First, though, comes a decision about his time at Detroit Mercy as the NCAA has decided that they’d allow a fifth year of eligibility – it’s usually four – due to the cancellation of this year’s fall season and most of the spring season earlier this year.

“I still have to discuss with the school and my family what's best for me, if I want to take that fifth year and keep playing tournaments here or next year might be my last year,” he said. “Either way after I do leave Detroit Mercy, I'm going to chase it as far as I can go. I'm going to try and become a PGA Tour player, as simple as that. As soon as I step foot out of Detroit, out of university, I'm going to treat this as a full-time job all day every single day and work the hardest that I've ever worked and see where it takes me. I definitely want to make it a job of mine one day.”

And that’s a goal he’s had for a long time.

“I definitely had it in mind in elementary school,” he said. “Every time I went and played a tournament, I felt like I wanted to do this when I was older. Fortunately enough for me, so far I'm on the correct path. It's definitely heading in the right direction.”

For local harness racing legend Ben Wallace, it's all about the love of the game
Apr 2, 2021 8:00 AM
Comments