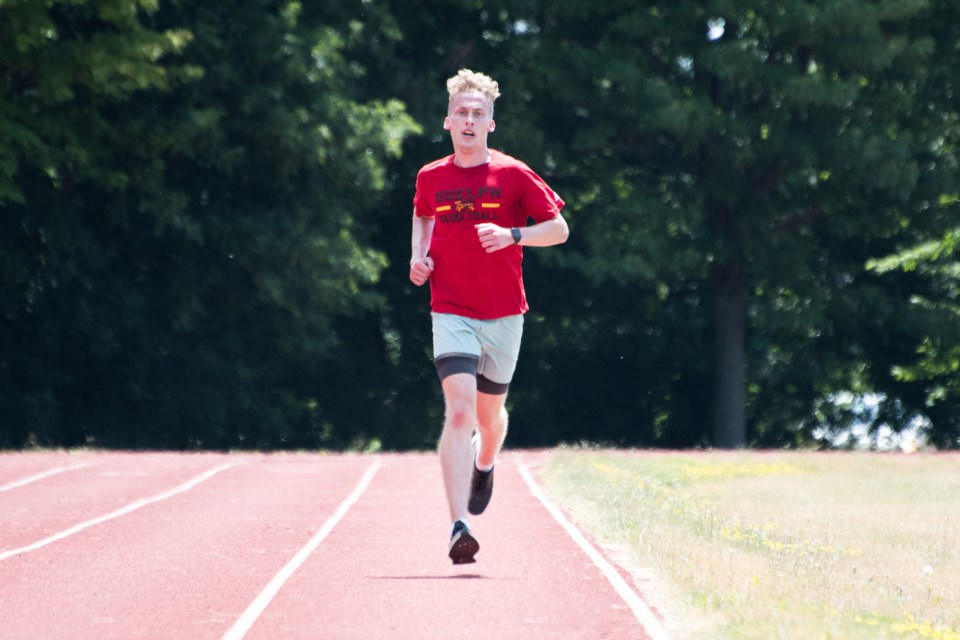 Guelph native Jake Chaput legs it out on the track during a workout at the St. James athletic facility. Chaput is getting ready for a marathon for charity July 25 to celebrate his recovery from a concussion suffered last summer. Rob Massey for GuelphToday.

Jake Chaput is going to go on a bit of a run July 25 to celebrate that he’s nearly fully recovered from a concussion he suffered about a year ago.

The 22-year-old Guelph native is also going to do the run to prove to himself that he’s recovered and also to raise some funds for a favourite charity.

The concussion suffered during a summer workout session July 22 of last year robbed the University of Guelph Gryphons varsity basketball player of what should have been his fourth and final season with his hometown university squad.

“I got elbowed in my forehead in practice and my head whipped around and I caught myself so I didn't hit the ground twice,” he recalled. “I was a little dazed when it happened, but nothing too bad. My vision was a little bit blurry as well, so that should have been a bit more of a sign. I called my dad and he came and picked me up.”

At first Chaput didn’t think the concussion was all that bad, but it soon became apparent that it was worse than he thought.

“I was getting very mild symptoms at the beginning so I just continued on with what I was doing,” he said. “At the time I was studying for the MCAT (Medical College Admission Test) because I want to go to medical school so I studied nine hours or so the next day and (the athletic therapist) said to reel it in a little bit with the studying, so I did. I didn't do as much studying the next day and for the next week, but I mean I was two and a half weeks out from my MCAT when I got my concussion so I couldn't really stop studying at that point. I had already moved it once and it's quite expensive to move it so I didn't want to move it again.”

He also had trouble distinguishing between the concussion symptoms and the normal tension headaches he experienced during and after the lengthy studying sessions.

“I wrote my MCAT and I went back to work in the summer. I worked one week of camps and then that's when I sort of realized that this is not too good,” he said. “I tried to go back to basketball practice, but I was starting to get symptoms and these are real symptoms. This is a concussion, so I took time off, but at the same time I was still applying to medical school so I felt I had to work on that. I wanted to go back in the fall so I registered for all my courses.”

He had physiotherapy and vision therapy every single day as he still had hopes of going to school last fall.

“The way the medical schools’ GPA system works in Ontario is that you have to do a fall and a winter (semester) for it to be counted as an academic year,” he said. “If you just do one of the semesters, then it doesn't count so I really wanted to keep my classes and try to defer them maybe, but it got to the point in late October where I had another little setback and I realized I can't do this anymore. There was no way I was going to be able to do these classes and return in the winter, so it was probably best to just cut my losses, get my tuition back.”

That, though, didn’t happen.

“I went through the tuition appeal process and I ended up getting only about 30 per cent of my tuition back.”

Apart from that, a tough thing for Chaput was a lack of being able to participate in anything.

“The specific problems that I went through, my neck was the worst part. The way I got my concussion, my neck really whipped around and my neck has not really been the same since. I still get treatment for it.”

Chaput was back to working out when the pandemic hit and the province went into its lockdown phase.

“The pandemic happened and I moved back home with my parents,” he said. “I was working out fairly regularly during the school year. It helps recovery once you can work out to work out as frequently as possible. So I was working out and I was biking, but obviously all the gyms closed so I started running. I really liked it right from the beginning. That's sort of how that happened.”

And now he has a goal for his running, one that he says won’t be achieved in his marathon run through the streets of south Guelph.

“My overall goal long term is to be able to qualify for the Boston Marathon. That's under three hours for my age group so I've just been trying to run at that pace,” he said. “This marathon is not going to be under three hours, that's for sure. It's only been a few months now that I've been training.”

That he has progressed to the point where he can run a marathon might surprise some of his former Gryphon teammates.

“I'm probably the least athletic under-six-foot basketball player ever,” he said. “I would come in last in almost every fitness testing that we would do, but the one I could control was the run, the stamina test. I would always win that on my team because it was the only one where I could actually have a chance. I've always been in really good cardiovascular shape because that's the only thing I could do well.”

To prepare for his marathon run, which will be the longest distance he’s ever run in a single session, he’s mainly been running by himself although some friends join in once in a while. He has a course picked that includes Stone Road, Victoria Road, Clair Road and Gordon Street.

“I'm going to do that three times and then I do a little bit of a loop into (the university),” he said. “I'm going to try to finish outside of the Athletic Centre. It's sort of full circle where I got my concussion to where I feel like I'm past it completely, mentally at least.”

He’s calling his run the Conquered My Concussion Marathon for Indspire and is raising funds for that association.

“It's an indigenous-led charity that focuses on indigenous youth,” he said. “The reason I chose it is that we're obviously going through a very active time for civil rights and probably the most depressed group within Canada anyways is indigenous people. My philosophy in trying to solve these problems that we still face with economic and health gaps that these people still face is starting young and going from there. Providing them a chance for education I think is so important and I know I am so privileged to have had the opportunity to get an education. That's the main reason I wanted to go into it.”

When he first came up with that idea, his mother suggested a fairly low target of raising $365 for Indspire.

“It was a dollar for every day for the concussion sort of thing,” he said.

He’s since raised the goal to $5,000 and is more than halfway there.

“I'd love to get it to $7,000 to $10,000 ideally because that would be symbolic as tuition for an indigenous student for a year at a higher learning institution,” he said. “That would be awesome.”

Chaput’s original plan was to run his marathon on July 22, exactly a year after he suffered his concussion, but that would mean running it on a Wednesday.

“I wanted to run July 22nd, but it makes more sense to me (to run July 25th, a Saturday),” he said. “I am working. I have a research job on campus. My hours are flexible and I could make up my work, but I think I'm going to be pretty gassed after the marathon so I don't know how productive I would be on a Wednesday after running a marathon.”

And does he have a time in mind for his first planned marathon?

Donations to the fundraiser can be made through Chaput’s Facebook page.