A few weeks ago Cam Guthrie created the COVID-19 Community Hero certificate to recognize those who have gone out of their way during the pandemic
May 25, 2020 1:45 PM By: Barbara Geernaert 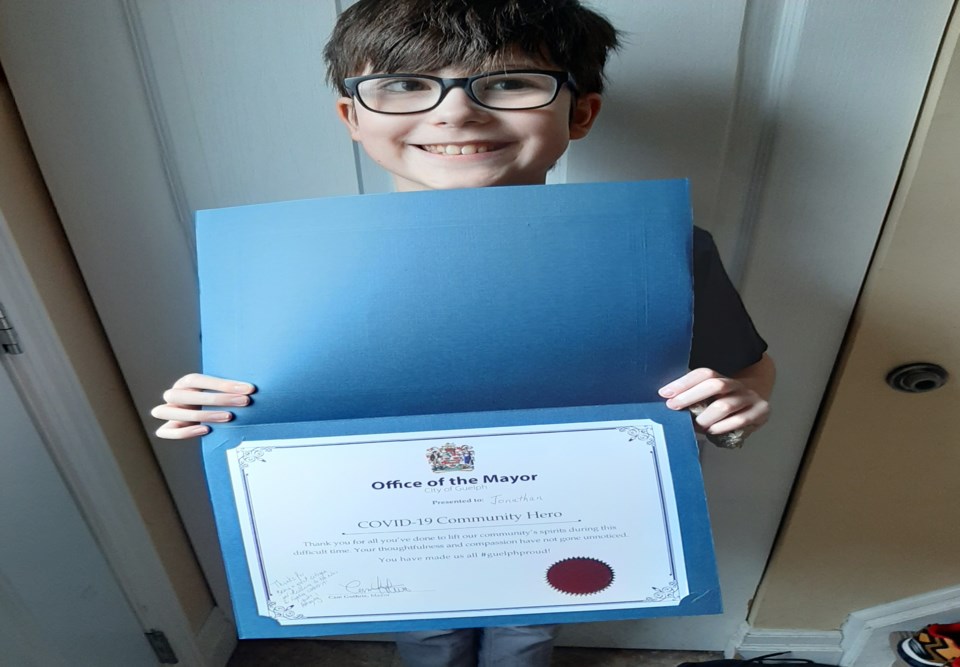 Jonathan Leader holds the certificate the mayor delivered to him. Submitted photo

He was convinced it was illegal to leave the house.

The thought of stepping outside for a walk was not a good idea during a global pandemic for Jonathan Leader.

Staying inside and self-isolating was exactly what the 10-year-old boy from Guelph knew he had to do, and he was planning to stick to it.

But Leader’s mother, Katherine Donnelly-Carder, thought she would take the matter into her own hands to try and help relieve some of the anxiety her son was feeling about COVID-19.

“I emailed the mayor and asked if he could send Jonathan an e-mail or a message, just to let him know that it was okay to go for a walk, as long as people kept their distance,” Donnelly-Carder said.

“I was hoping for an email or a letter. Just something Jonathan could see to let him know that it’s okay, that it’s safe.”

Guelph Mayor Cam Guthrie took it one step further and decided to pay Jonathan a personal visit to his home and presented Leader with a special certificate recognizing him as a “COVID 19-Community Hero.”

“I’ve always liked meeting people and if I can meet them personally during these times, even from a distance, then I do. Tone of voice is absent from an email. Saying thanks is always better in person,” Guthrie said.

After asking Donnelly-Carder for her address, the doorbell rang soon after.

“We decided to keep it a surprise and asked Jonathan to get the mail,” she said.

Little did he know Mayor Guthrie was at the door, certificate in hand.

“I was surprised, and he kept his distance,” Leader said. “He told me it was okay to go for a walk and play in the backyard, just not in anyone else’s.”

Guthrie was happy to help relieve some of the anxiety.

“I wanted him to know that he can still go for a walk but as long as he keeps his distance from everyone else,” he said.

“And I really wanted to get to know him too, so we talked about a fossil that he found in his backyard, what he likes to do and about school.”

Leader is a Grade 5 student at Ottawa Crescent Public School who enjoys math and gym. He says that during quarantine, he’s been busy on his computer at home, painting rocks and he even came up with a treasure hunt.

A few weeks ago, Guthrie says he created the COVID-19 Community Hero certificate to recognize those who have gone out of their way during the pandemic.

“I’ve handed out about 8 to 10 so far. We’ve gone to young people who made artwork on a sidewalk, entrepreneurs who have helped support local businesses and three young children who made signs for frontline workers,” Guthrie said.

“When Jonathan’s mom contacted me, I thought here is someone who is really wanting to follow the rules and so much so, that he was worried about going for a walk. Here is a young boy who needs to be recognized for adhering to the rules and for taking it seriously.”

Leader’s seven-year-old brother Jacob was also excited to receive a visit from the mayor. Both were delighted to display a new #guelphproud button from the mayor.

“They stood on the driveway, six feet apart, and chatted for a bit, alleviating Jonathan’s concerns,” Donnelly-Carder said.

“Jonathan is so proud of his certificate.”

Leader says he feels much better since the visit with the mayor and he keeps the certificate in his bedroom.

Donnelly-Carder is grateful to the mayor for making her son’s day.

“We haven’t had any issues since. It’s funny how something like that can instantly change someone,” she said.

“And it’s been so nice to finally get out for a walk.”

GALLERY: A photographic stroll around historic downtown Guelph (26 photos)
Jun 4, 2020 11:00 AM
Comments
We welcome your feedback and encourage you to share your thoughts. We ask that you be respectful of others and their points of view, refrain from personal attacks and stay on topic. To learn about our commenting policies and how we moderate, please read our Community Guidelines.