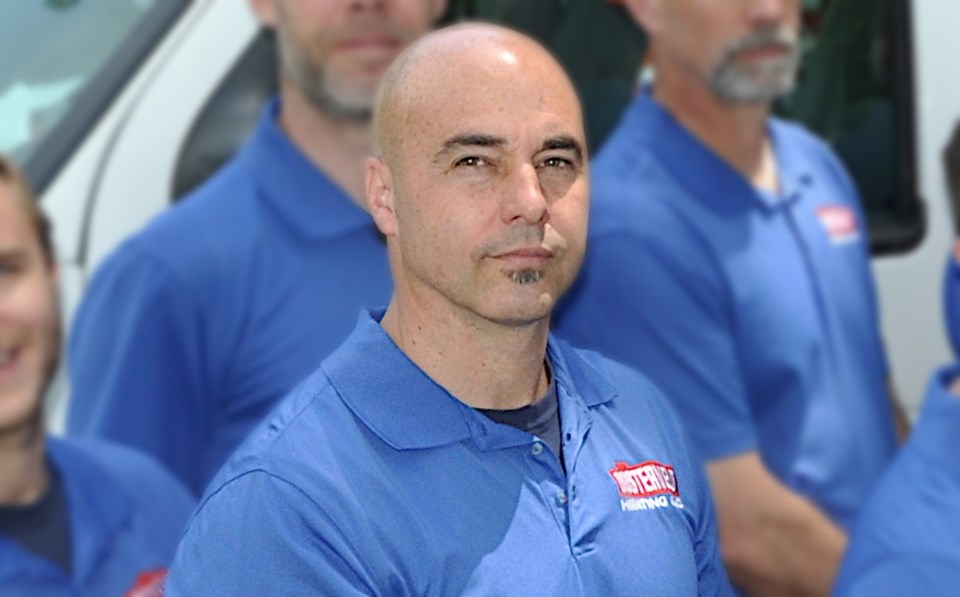 Running a company that specializes in heating and air conditioning, an employer can grow accustomed to things running hot and cold. However, for Oosterveld, one thing that’s remained consistent has been HVAC technician, Jeff Nelmes.

Nelmes, a married father of four is celebrating 20 years of loyal service with Oosterveld, a respected, family-owned and operated heating and air conditioning service known for quality service throughout Guelph and surrounding area.

“Jeff is the model of consistency,” said Alysha Johnson, Operations Manager with Oosterveld. “You always know what to expect from him. He’s loyal to a fault, and he gets the job done quickly and efficiently.  A lot of our clients know him and ask for him just because he’s so great.”

For someone born and raised in the “Royal City,” Nelmes is happy to still be plying his trade in his hometown two decades after joining the company. However, as someone who has enjoyed mechanical pursuits since he was a child, Nelmes acknowledges being an HVAC specialist for 20 years wasn’t his initial goal.

“I was a second-year auto mechanic when I decided to join the company,” said Nelmes, who has since added electrical, plumbing and heating to his skill set. “They were just looking for someone at the time. I used to be an installer, then I wanted to learn to fix them. I had to go for all the licences and training. It’s a good trade.”

Advances in HVAC equipment has meant companies like Oosterveld have had to ensure their technicians stay current with new technology. In his experience, Nelmes says that adapting to a changing industry has made his job easier and interesting.

“There are always new furnaces, and you have to learn the different set-ups and how to diagnosis problems,” said Nelmes. “Some are getting easier though. Before, when there was a problem, you had to go through and try to diagnosis it. Now, some furnaces display what the problem is. They can actually store up to 10 of the last faults. It makes it much easier.”

Over the years, Nelmes has diagnosed many different problems found in both new and aging HVAC systems. If there’s one piece of advice that he would give homeowners is to check their air filters often.

“Many people call when their furnace quits working, and when I go to their homes, it’s often a dirty filter shutting down their system because it’s overheating. Filters are the number one thing they should check.”

As for what fuels such employee loyalty, Johnson says Oosterveld is unique compared to companies providing similar services.

“We have our own guys, not sub-contractors, and we pay hourly,” she said. “They can take the time to do the job the way it should be done. We say if you don’t recommend it to your grandmother then don’t recommend to the customer. We do what we say we’re going to do.”

For a full menu of Oosterveld services, visit www.oosterveldheating.com.

Comments
We welcome your feedback and encourage you to share your thoughts. We ask that you be respectful of others and their points of view, refrain from personal attacks and stay on topic. To learn about our commenting policies and how we moderate, please read our Community Guidelines.