“‘I can’t explain myself, I’m afraid sir’, said Alice, ‘because I’m not myself, you see’. ‘I don’t see,’ said the Caterpillar.” Lewis Carroll

Words may not always be effective or all that useful in communicating.
0

One of the most important aspects of our lives is communicating with others. If it is done well it makes for a smooth running family, business and society in general.  Yet so often it’s easy to be misunderstood or misunderstand what a person is trying to say to you. Even close partners, wives and husbands, have trouble communicating their innermost feelings and private thoughts for one reason or another so it’s not hard to understand miscommunication in a community at large.  Despite our arsenal of thousands of words, and a myriad of communication devices, accurate information is rare.

This problem, a barrier to mutual understanding, stands as a key impediment to human progress and peace. Today this situation is exacerbated by what would normally be viewed as a positive;easy access to lots of knowledge. Instead we have too much of it resulting in information overload.In a recent study by the Knight Foundation it was found that 58 per cent of people feel that it is “harder rather than easier to be informed today due to the plethora of information and news sources available,” says The Globe & Mail.

This phenomenon of too much information causes the trivial to be mixed in, and often confused, with the important. The problem has become even more acute because of the general lack of immediate communications such as face to face meetings or phone calls.

In the world of computers and smartphones our exchanges are always delayed, asynchronous and antiseptic as the vital characteristics of communications like inflection, tone and emotion are lost.

Nuance is absent. You simply cannot tell whether a person is joking or serious. No wonder there are a lot of confused and misled folks in the world … people who are always guessing, rightly and wrongly, what other people really think of them.

Confusing the less important information, or misinformation, with the information that requires your serious attention is common. It was Marshall McLuhan who divided “information” into four levels, a progression running from rudimentary to important knowledge. "To illustrate the four levels of information first imagine a person who takes long walks in the woods for exercise.

They wear a pedometer ‎to track their steps. They jot down that they walked 10,000 steps on Monday. This is an example of raw data. Analyzing the week's walking outings and calculating they walked on average 9,050 steps a day is information. Being aware that a minimum of 10,000‎ steps a day is required for optimum heart health is knowledge. Finally knowing that daily walks in nature is good for the soul is wisdom."

At the lowest level of information, we find raw data. Then there are statements of fact or empirical descriptions of things. The third level occurs when all the raw data and basic information coalesces into what we call “knowledge.” The highest form of information is wisdom, something very different from knowledge. In my many years spent at university I met many very intelligent academics.

They were full of knowledge, but in their personal lives they behaved like children, or worse, like asses. They were often peculiarly naive about life’s most important activities. I saw more wisdom in some first year students than my fellow professors. Some of these youngsters were able to digest all the data, empirical statements and knowledge they encountered and process it into bits of wisdom.

The goal of communication – to impart important knowledge and wisdom between different parties – faces a perennial problem. I believe the whole problem of miscommunication resides in the carrier itself, ie: words.  I think that they are not be up to the whole task of “transporting” knowledge. Words, after all, are only symbols for some “thing” – they point to another reality.

Maybe there is a way to bypass words and communicate through other channels … an intuitive pathway?  I spent a lot of time with a former philosophy professor spending afternoons after long lunches, just thinking in each other’s company while watching the world go by.  We both seemed to be on the same plane and had come to the same observations and conclusions by days’ end, with barely a word spoken. There was a communal form of communication going on the whole time.  To this day I cherish spending time with people who do not feel compelled to continually chatter.

A while ago I traveled to Iceland and came across two provocative quotes in the middle of the airport outside Reykjavik. One quote was written on the floor, the other on a glass wall.  The first one was by the poet Nina Björk Árnadôttir who wrote, “Perhaps if you listen attentively you will hear of what I’m thinking." This is a beautiful description of true communication – a listening beyond words. The real meaning is defined by listening on an intuitive level –the one where the true feelings and essence of the communication lies.

The other quote was from Iceland’s award-winning novelist Haldór Laxness from his book “Under the Glacier”.  “It’s a pity we don’t whistle at one another, like birds.  Words are misleading”.  This presents an interesting possibility but also a bit of dilemma… a lot of people, and most young children, can’t whistle very well.  Somehow I think we must use words in a subtler way and somehow learn to employ more than just our ears and eyes.

Some of the Greek philosophers, Parmenides prominent among them, thought that our real Being was like a sphere or globe or perhaps they were referring to their idea of soul or auras?  They thought we must circulate our words in order to tell a ‘round truth’ – a fuller truth. Whatever they meant by ‘circulate’ may also hold the key to better communication.

There seems to be something about it that sounds like a less direct method of getting a point across. Maybe the listener must find the truth at the edges of words as they hover around the outer parts of the sphere. Confusing enough?

All of this gibberish brings me back to dear Alice for no other reason than for a dash of humour…and because Lewis Carroll was bloody brilliant with words.  At the Mad Hatter’s Tea Party there is a conversation between Alice, the and a rabbit that goes like this:

‘I’ve had nothing yet’, Alice replied in an offended tone: ‘so I can’t take more’.

‘You mean you can’t take less’, said the Hatter: ‘it’s not very hard to take more than nothing.’” 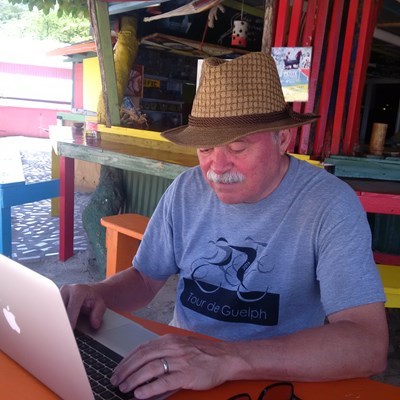 Bob Desautels is a successful restaurateur, author of two books and former professor at the University of Guelph’s Bachelor of Commerce program.

Visit his blog at https://www.bobdesautels.com

Business as usual on Guelph Junction Railway in face of Canada-wide rail blockades
Feb 20, 2020 7:00 AM

How to write a news release
Feb 15, 2020 4:40 PM
Comments
We welcome your feedback and encourage you to share your thoughts on this story. We ask that you be respectful of others and their points of view, refrain from personal attacks and stay on topic. To learn about our commenting policies and how we moderate, please read our Community Guidelines.