Council was divided on splitting an attainable housing recommendation in two which led to the agenda being rejected
Apr 19, 2021 4:06 PM By: Keegan Kozolanka 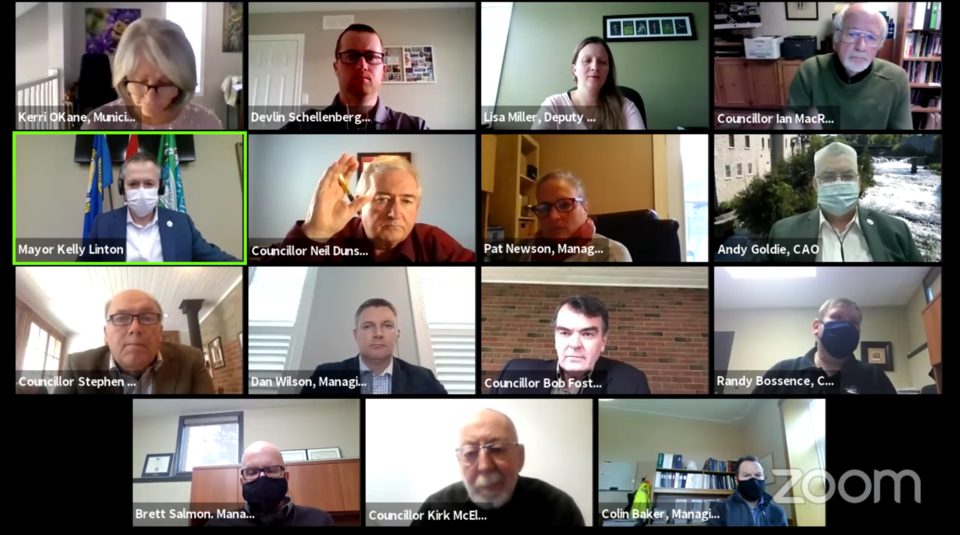 CENTRE WELLINGTON – A routine council action ended up causing the adjournment of a Centre Wellington committee of the whole meeting Monday.

The virtual meeting was over in just under 10 minutes.

Centre Wellington councillors were evenly split in approving the agenda, which meant it was not approved, which meant the meeting couldn't proceed.

The unusual meeting started with Coun. Kirk McElwain wanting to split a recommendation regarding attainable housing into two separate items.

The first part of the recommendation was to support the County of Wellington’s 10-year capital plan to increase funding into affordable and social housing.

The second part was to support Centre Wellington’s healthy growth advisory committee (HGAC) to establish an attainable housing target and to send council recommendations on how to increase the supply of attainable housing.

It was a single agenda item, but McElwain wanted these to be separate. Councillors Stephen Kitras and Bob Foster supported this but mayor Kelly Linton, Coun. Ian MacRae and Coun. Neil Dunsmore voted against splitting it.

A tie vote means an item is defeated. Coun. Steven VanLeeuwen was absent from this meeting.

Brett Salmon, managing director of planning and development, began to explain the recommendation but clerk Kerri O’Kane reminded the agenda still needed to be approved.

The votes went the same way with the councillors who wanted to split that item voting against approving the agenda.

This meeting was then adjourned just over nine minutes after it began.

In a phone call after the meeting, Linton said this is the first time he has seen something like this happen.

Linton said he finds it frustrating to see staff time wasted and to lose time on finding ways to increase the supply of attainable housing.

“This is just another roadblock for us getting some traction on one of the biggest issues that we’re faced with here,” Linton said.

MacRae, who sits on the HGAC, also expressed dismay over a lack of big picture thinking on the attainable housing issue.

He noted a recent Canada Mortgage and Housing Corp. rental market report put Centre Wellington’s rental vacancy rate at 0 per cent while a healthy community should be at 3 per cent.

He said he believes politics were at play over what McElwain, Foster and Kitras are making into a contentious issue. He said there is a community group using heritage as a means to push back against growth and densification.

“They see protection of heritage as saying no to any form of growth and especially densification in our existing neighbourhoods or older neighbourhoods for example,” MacRae said.

McElwain said in a phone call after the meeting he had no issue with the first part of the recommendation and was in full support of the social housing enhancements. Attainable housing is a different story that doesn't have his full support yet.

He said the growth strategy is supposed to be based on requirements from the official plan, urban design guidelines and heritage study among others. However, he noted a growth management land use study from years ago still has not come back to council from HGAC.

"Without those documents as part of the discussion, I'm not sure how they can come up with an attainable housing strategy to be honest," McElwain said. "They're all part of it and we really needed more discussion. Voting on something without any definition of what it is or how they're going to do it doesn't seem to me like we're doing the job we're supposed to be doing."

Foster said after the meeting he was disappointed there wasn’t more of a discussion but he wanted a more specific definition on what attainable housing was before approving the committee’s direction.

Kitras agreed he wanted metrics and parameters for attainable housing and called McElwain’s motion to divide the recommendation a “reasonable request.”

He compared the original recommendation to an “omnibus bill in parliament.”

Linton explained this is exactly what the HGAC is working on to get off the ground to be able to provide recommendations to increase supply. Approving the agenda would have meant a fulsome discussion could have taken place.

MacRae said he is frustrated some councillors believe they should be setting the attainable housing targets.

“We all agreed to form this healthy growth committee to allow citizens to assist us in identifying what issues we should be focused on as a community that has been mandated to grow,” MacRae said.

“Council is refusing to listen to them as far as how I’m interpreting this. I think it’s totally unacceptable.”

Now staff will have to work out how to bring the many agenda items — which included alternative voting methods, building official appointments, wastewater service contracts and others — back to another meeting,

“(Staff) work pretty hard over the course of a month to make sure that we have an agenda ready for the committee of the whole,” Linton said.

“Now that we didn’t have the meeting, staff have to go back to the drawing board to figure out how we bring all this stuff back because nothing happens until then.”