The pandemic has prompted the upper echelon organizations to ask legions for toned down services
Oct 28, 2020 6:59 AM By: Keegan Kozolanka 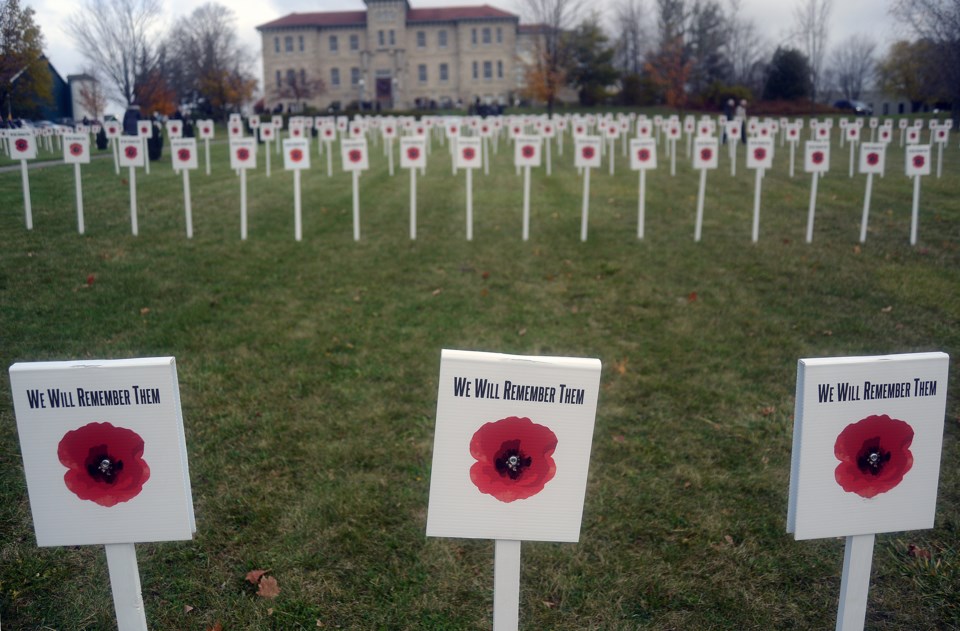 WELLINGTON COUNTY – Remembrance Day ceremonies are going ahead in Wellington County but the public is not being encouraged to attend.

John Dalley, past-president of Arthur Legion Branch 226, said the provincial and federal legion organizations have asked local branches to tone down any services.

“Normally we’d fill the whole cenotaph area with school kids and whoever else wants to be there but because of the situation with the pandemic it’s not going to happen,” Dalley said. “You can’t put a crowd there anymore.”

He said there will be no parade, all wreaths will be pre-placed, the colour party will be smaller and the service in general will be shorter.

Even the poppy campaign will not be the same as in previous years as they are not sending anybody to sell poppies in stores.

“We’ll have boxes but we’re not going to have cadets this year,” Dalley said.

The Legion Branch 229 in Elora is encouraging the public to follow services on TV but are still going forward at the cenotaphs in Elora and Salem with simple ceremonies.

Don Cubbidge, vice-president and poppy chair for branch 229, said they will also be laying wreaths ahead of time.

“Those wanting to lay their wreath can do so at the end of our service,” Cubbige said by email.

“We are encouraging everyone, whether attending in person (social distancing is a must) or watching the service on TV, to wear a poppy.”

Cubbige stressed that all funds collected through the poppy campaign are used exclusively to assist veterans and their families and not for branch operations.

The Township of Guelph/Eramosa is also planning a smaller ceremony at the Rockwood Cenotaph but is asking people to stay home.

“The importance of a live ceremony honouring our veterans and their sacrifices is considered paramount,” a press release from the township says.

“Spectators will be discouraged from attending in person, due to the limited space and requirement to physically distance.”

Two different events will take place at the Wellington County Museum and Archives but administrator Jana Burns said these will also be different from past years.

There will be a ceremony on Nov. 5 starting at 10:30 a.m. on the museum grounds that will be televised by local stations.

She said there will be no colour guard, live music, reception and each legion will be sending one representative only to read the names of fallen soldiers.

The public is not encouraged to attend.

“We have to keep the public and especially our veterans safe,” Burns said.

There will be a candlelight tribute which will be lit on Nov. 10 at dusk and remain in place until Nov. 12.

“That’s where we encourage the public to visit the candlelight tribute to the fallen,” Burns said.

The museum is also launching an online exhibit, called Our Cenotaphs Unveiled, that tells the history of the 13 cenotaphs across Wellington County.

This will be accessible on Nov. 11.

'Unfortunately, Wellington County is pulling the whole region into the red:' Warden Kelly Linton
Nov 26, 2020 1:50 PM
Comments
We welcome your feedback and encourage you to share your thoughts. We ask that you be respectful of others and their points of view, refrain from personal attacks and stay on topic. To learn about our commenting policies and how we moderate, please read our Community Guidelines.