The pool at the CW Community Sportsplex will be reopening on Aug. 4 under strict guidelines
Jun 30, 2020 9:00 AM By: Keegan Kozolanka 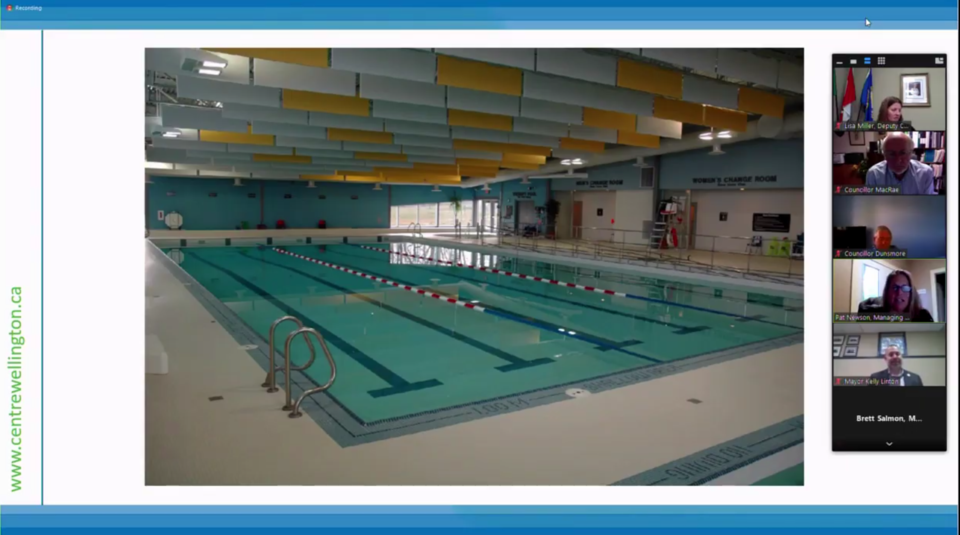 CENTRE WELLINGTON – Centre Wellington’s Aquatic Centre will be reopening Aug. 4 after getting approval from council.

Council was presented three options for opening: Aug. 4, Oct. 1 or remain closed until a vaccine or cure is developed.

Pat Newsom, managing director of community services, explained that pools in the province were permitted to reopen from June 12 under guidelines fairly similar to other facilities.

Capacity will be heavily reduced, one person is allowed per square metre of pool surface meaning a maximum of 43 swimmers at a given time.

All visitors must pre-book their visits with lane swimming reduced to one hour time limit instead of the usual two. Lessons will also be done individually or to family groups regardless of skill level.

Newsom said some impacts of opening during a pandemic would be reduced revenue and increased labour costs to operate. An extra lifeguard would be needed to specifically enforce physical distancing as those watching the waters need to remain focused.

Councillor Ian MacRae said he was learning towards Oct. 1 but changed his mind to an earlier opening after hearing from residents.

“The feedback I got was unanimous, open in August primarily because residents need to see a sign we’re getting out of this COVID,” MacRae said.

Others on council had heard the same thing. Councillor Neil Dunsmore said people needed a place to swim because the few options available, such as beaches, are becoming crowded.

The thoughts on this were mostly unanimous but councillor Bob Foster had reservations on making a decision on this at all. He said he felt it was an operations decision and questioned CAO Andy Goldie on why it came to council.

Goldie explained that it came to council because of financial implications. A projected revenue loss on the agenda shows an Aug. 4 opening will lead to a loss of nearly $150,000.

Foster wasn’t convinced that this should be a council decision and said it was a health matter.

“This is a sensitive matter because of the health implications and that concerns me,” Foster said.

The rest of council voted in favour of opening on Aug. 4 with Foster abstaining his vote.

Walk-in mental health clinic opening in Harriston
Jun 30, 2020 1:45 PM
Comments
We welcome your feedback and encourage you to share your thoughts. We ask that you be respectful of others and their points of view, refrain from personal attacks and stay on topic. To learn about our commenting policies and how we moderate, please read our Community Guidelines.