All this over a button 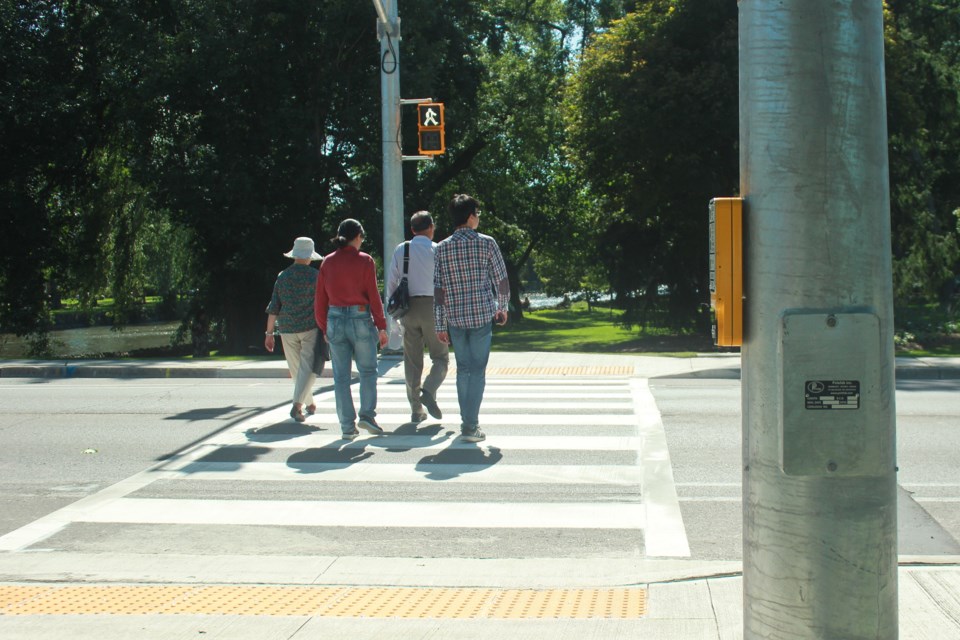 Editor's note: Late Friday, after this column was written, the city announced the crosswalks would be reverting to their original mode of operation.

What do you call a town that claims to want to improve active transportation and make it easier for people to get around without a car, and then complain bitterly when that town institutes even the most minor of changes?

You call it Guelph.

A few weeks ago, it was announced at council that the City of Guelph was going to fix all the so-called “beg buttons” at crosswalks. It makes sense because you don’t want a big button that a lot of people have to touch in order to cross the street. You know, spreading germs and all that.

According to the social media reaction though, this has been a profoundly grievous act on the part of the city. Do you have any idea how many seconds have been added to people’s commute?!

It’s weird to think that at this time people are still so terribly concerned about their punctuality. Most people are staying home, so how bad are the traffic jams? Are people taking attendance at the grocery store? Or at home?

Let me voice some of my frustrations as a pedestrian trying to get around this town in non-pandemic times.

Those intersections where you have to press the button to get a walk signal? One of them is near a grocery store. Have you ever tried to hustle to get to the button on time while carrying a heavy load of groceries just so you don’t have to wait an extra five minutes at the lights?

Do you know what it’s like to try and hustle with heavy groceries across a busy intersection with the ticking clock that’s entirely too short given the width of the street? It would be one thing if the street were clear, but it’s entirely different when you’re surrounded by people who see you as an obstacle in their way, and not as someone to share the road with.

Guelph roads, for the most part, are one giant game of Frogger.

And then there are the occasions when you get to the intersection on time to press the button, and the walk signal never comes up. Did you push the button hard enough? Is it broken? And if the button is broken, who do you call to have it fixed? It’s not like there’s a sign or sticker with a phone number on it.

That’s just a very specific example of the problems with sharing the road. I can also think of people who park in bike lanes indiscriminately. Or people parked at the side of the road who open their car door without looking for cyclists passing by where there are no bike lanes.

As pedestrian, I will also note a problem in Guelph with aggressive driving. I’ve had to walk down sidewalks that cross a driveway while watching someone turn aggressively out of the corner of my eye. I’ve had to stare down a driver in the middle of the intersection as I lawfully cross the street with the light.

You think you’re angry having to wait at a stoplight, imagine how angry you would be knowing that you are doing everything to obey the traffic laws, and that you still might die because when it comes to human versus car, the human’s always on the losing end. I might be dead because so many of you are so impatient whenever you see red.

That brings us to the next meeting of council where councillor James Gordon will bring forward a motion to close select traffic lanes to create more active transportation routes for the duration of the COVID-19 pandemic. Are we not already seeing a problem with this?

You see, we already have people angry about the fact that they have to wait at red light a little longer, so how angry are they going to be when they drive along Paisley Road and find that a lane is closed off for cyclists, and there’s no cyclists?

Remember back last fall when the city experimented briefly by creating a transit priority lane along Gordon Street. The transportation staff will tell you that the reaction to losing one lane to buses only was overwhelmingly negative, and that’s a road where there’s also a bus passing by.

The bottom line is that no one likes a disruption to their routine, and there’s been no bigger disruption to our routine in our lifetimes then what’s happening with the pandemic. What people are angry about is not the longer red light, it’s the fact that they’ve lost one of the remaining shreds of control that they were holding on to.

I made this point a few weeks ago, but I will say it again, now’s not the time for social experimentation, especially when even basic, common sense changes burn people so badly we have to write about them in the local media.

I want a more walkable city too, but there has to be a widespread agreement about how best to do it. Guelph is still a driving town, and not even a global pandemic can change that.