How do we return to our offices in the 'new norm'?

As people gradually return to work, offices and shared work spaces have their own set of issues to deal with
Jul 19, 2020 9:00 AM By: Maxine Betteridge-Moes 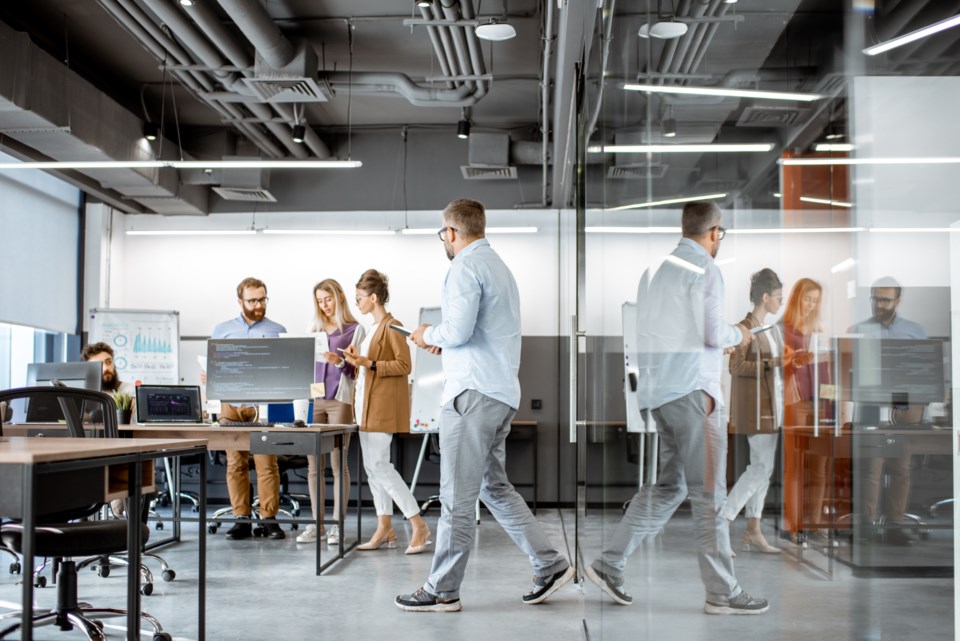 It’s been a burning question since the start of the pandemic, as many people around the world contemplate the sustainability of working from home and the risks of returning to a busy office environment.

Employers grappling with how to bring their teams safely back to the office need to consider a slew of guidelines including physical distancing, sanitation stations, temperature checks, staggered start times and more.

And as many parts of Ontario, including Wellington County, move to Phase 3 of the province’s reopening plan on Friday, more people will be returning to work - though in a very different capacity.

“In the short term, those that were able to work from home may continue to do so in order to isolate or reduce the amount of risk that we're exposing our workers to,” said Nita Chhinzer, a human resources professor at the University of Guelph, specializing in labour and employment patterns.

“But when we forecast longer, working from home might not be the ideal solution.”

Research shows that people who work from home are often overlooked for promotion and development opportunities.

Other long-term challenges with working from home include lower productivity for some and burn out for others, as well as establishing an organizational culture with many employees working off-site.

But for the coworking industry in Guelph, these challenges could spell out new opportunities. The city’s handful of shared office spaces and innovation hubs could address these challenges with unique offerings in safety, sustainability and affordability.

“Collaboration and community help [entrepreneurs] to validate ideas and gain confidence,” said Diana Train, the events manager at Innovation Guelph, a coworking and event space in the South end.

“These benefits existed before the pandemic and will endure in a post-pandemic world.”

Innovation Guelph is one of six coworking spaces across the city, the majority of which are located downtown. But that number is poised to change, as affordable and accessible coworking spaces become more appealing to sole entrepreneurs, growing businesses and large enterprises alike.

In the first quarter of 2020, Guelph had the highest rental rate and the lowest vacancy for office space in the Waterloo region, according to a report by CBRE Group. This could mean that coworking spaces may provide a viable alternative to traditional or home office space for a growing number of workers.

“We are surprised at the number of people that have reached out,” said Jordan Delfs, the events activator at 10C - a coworking space and social innovation hub in downtown Guelph.

“We've had quite a few new potential members reach out because they're looking for a place to work that isn't necessarily at home.”

Before the pandemic, 10C hosted up to 150 members a day in private offices, coworking desks and in their large event space. Now, coworking spaces have adopted a number of measures to reopen safely, including installation of sanitation stations, physically-distanced work areas, cleaning kits and strict requirements for wearing masks. 10C has also converted their large event space into individual work stations and are renting out their licensed commercial kitchen space.

“There has been a huge upswing in the number of people that have been interested in using the kitchen,” she said, adding that 10C has also started making their own food products using waste from other companies as part of Guelph’s Smart Cities initiative. “We're making bread, granola and hummus which will [eventually] be available to people working in the building.”

One of those people is Tim Campbell, a local entrepreneur who has been working from 10C since 2018.

“I needed the separation of work and home life. I also wanted to be around other entrepreneurs,” he said, adding that the space is more affordable than renting a private office.

Although coworking spaces are used predominantly by small businesses or individuals, this trend is changing as Canada’s coworking office market has expanded rapidly over the last several years - particularly in cities like Toronto, Vancouver and Montreal where office vacancy is also low. On a global scale, a recent study shows a steady growth in the industry, with an estimated five million people working from coworking spaces around the world by 2024.

Brendan Johnson, the executive director of the Guelph Neighbourhood Support Coalition, says several of his employees will continue to use coworking spaces to take advantage of shared resources and networking opportunities.

“I talk to partners and organizations to encourage them to join us in the space because it just makes so much more sense,” he said. “I think collaborative spaces are the way of the future.”

Professor Chhinzer says that in some ways, coworking spaces have revolutionized the world of work by offering flexible and innovative office environments. But she says they’re not necessarily a viable solution for all workplaces - particularly when it comes to privacy concerns around shared Internet, communal printers and open screens, as well as other health and safety risks during the pandemic.

“Coworking spaces need to think about their administrative role and have some authority to enforce the restrictions, as well as guidelines about what happens if people violate them. In a common workplace where people are coming in from different organizations, they need to enforce their own rules around safety,” she said, adding that coworking spaces can capitalize on the needs of both workers and employers by providing a healthy work environment that encourages professionalism and productivity.

As the professional world gradually returns to some semblance of normalcy, this transition has the potential to bring in a wave of opportunities for coworking players willing to adapt, innovate and grow. In turn, these community hubs could help stimulate the economy by expanding businesses, creating jobs, and establishing connections to meet evolving needs in the new world of work.

UPDATE: Six new cases confirmed in Guelph Thursday
Oct 1, 2020 11:30 AM
Comments
We welcome your feedback and encourage you to share your thoughts. We ask that you be respectful of others and their points of view, refrain from personal attacks and stay on topic. To learn about our commenting policies and how we moderate, please read our Community Guidelines.