Life may be on hold for many, but not for Big Brothers Big Sisters

Maintaining the bond between bigs and littles is more important now than ever, says the agency
Apr 8, 2020 3:00 PM By: Kenneth Armstrong 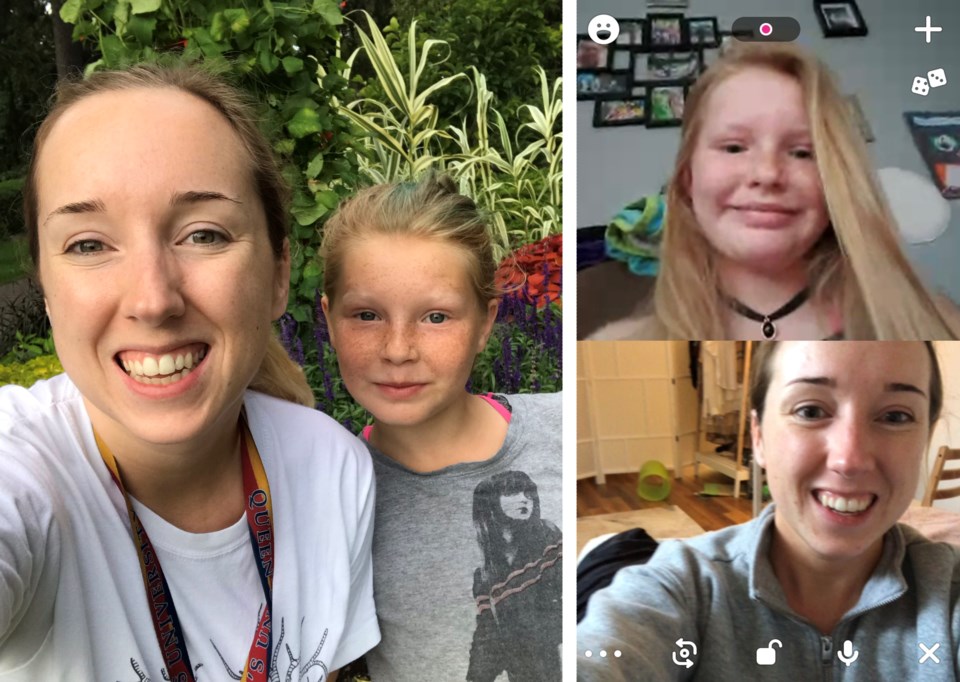 'Big sister' Madison Fach with her 'little sister' Keenah seen together before the pandemic (left) and by video chat after. Photos provided.

Big Brothers Big Sisters Guelph is making the move to virtual meetings between littles and bigs because physical distancing guidelines are preventing one-on-one time between matches.

Madison Fach has been involved in BBBS for almost three years and was matched last summer as a big sister with 10-year-old Keenah.

Fach said they are still at an important part of the relationship building process.

“The first few weeks it was hard for us to navigate how to understand her feelings and what she wants to do,” said Fach. “I feel like we have just gotten past that hurdle and now it’s hard feeling like we are having to take a step back.”

Like all bigs, Fach has committed to a weekly one-on-one meeting or activity with her little, which might include a movie or taking in a Guelph Storm game. With physical distancing guidelines as part of the COVID-19 pandemic, that just isn’t possible in the foreseeable future.

“You still need to find ways to maintain that relationship,” said Fach.

Currently, the pair are doing a lot of video chatting using Keenah’s tablet.

“All everyone talks about right now is how it’s hard and the challenges, but something I have found that is good for us to do is we downloaded the game House Party, which lets us play games together,” said Fach. “She loves playing Pictionary so we have been doing that a lot where she will draw and I will guess and vice-versa. Since drawing and colouring is one of her favourite things to do, we have had a lot of fun doing that.”

Instead of a once-a-week meeting or activity, Fach has let Keenah know she can message her any time.

“More importantly what I have found works is we actually talk every day on a short phone call — about 10 to 15 minutes — because I found out we would hang out before for three to four hours, but you can’t really translate that long distance,” said Fach. “We can’t have a four-hour conversation, it just doesn’t work the same. I find having small conversations with her every day is a better way to keep up with how she is feeling and what she is doing.”

“The consistency of our bigs in the lives in our littles outweighs anything else that is going on right now,” said Treadgold. “Having that caring, consistent adult role model in their lives is really what is most critical at any time, but especially during the COVID-19 pandemic, in terms of giving that youth the opportunity to reach their full potential and not be detracted by some of the things that are going on.”

Big Brothers Big Sisters Guelph serves Guelph and the immediate surrounding area, including Rockwood, Puslinch, Morriston and Aberfoyle. About two-thirds of the children serviced by the agency are in group programs, with the other one-third in one-on-one pairings, like Keenah and Fach.

Treadgold notes access to technology like tablets may not be available for all the littles in the program, in which case the agency encourages phone calls and letter writing.

“It’s really about going back to the old school routes of communication,” said Treadgold. “There’s also some skill development there, but it’s also about relationship connectivity and letting kids know their big brother to big sister still cares about them and is still committed to them.”

Treadgold said the agency’s volunteers, like Fach, have been incredibly adaptable through the whole lockdown process.

“Their willingness to stay committed, those special individuals who are willing to go above and beyond with their littles, they understand this is a critical time period,” he said. “Their willingness to keep a degree of normality through this time when so much is uncertain has been reassuring and ultimately it’s going to be hugely impactful and beneficial for the development of the kids.”

Treadgold said bigs have been instructed to not see their littles in person, even if physical distancing is maintained.

“We want everybody who is involved with Big Brothers Big Sisters to keep their distance, to be healthy and safe and to be ambassadors for those best practices in the community,” he said.

Treadgold said the agency is first concentrating on getting the one-on-one pairings to meet virtually while it figures out how to best serve the children who usually interact through the group programs.

“Trying to organize a Zoom call with 10 adults can be challenging enough, let alone four or five adults and half dozen kids in a group program — so we are still working through what that’s going to look like,” he said.

What may end up being a bigger challenge in the long term is the way physical distancing is affecting fundraising for Big Brothers Big Sisters Guelph. Upcoming fundraising events like Bowl for Kids Sake and the Big Downtown Food Truck Picnic are on hold.

“Unfortunately it’s going to fall by the wayside this year because it’s exactly the opposite of what we are supposed to be doing as a community right now in terms of gathering in a singular location,” said Treadgold.

The Big Little Run scheduled for the last Sunday in June hasn’t been cancelled or postponed as of yet, but Treadgold expects that decision will come soon. He said it is fortunate the organization held its annual fundraising gala in February, prior to the lockdown.

“Fundraising is impacted by this, as it is for all other organizations, I have no doubt. It’s something we are dealing with. We are having a lot of great conversations with our funders and our donors,” said Treadgold. “We are trying to come up with creative ways to fundraise, while still maintaining social distancing and not having a lot of the traditional fundraising tools we would usually have in our toolbox to be able to execute some of these initiatives.”

Fach and Keenah and their relationship were recently featured in a video made for Big Brothers Big Sisters Guelph's YouTube page.