U of G votes in favour of divesting from fossil fuels

The door has been left open to possibly support some green energy projects by oil and gas companies
Apr 22, 2020 7:07 PM By: Kenneth Armstrong 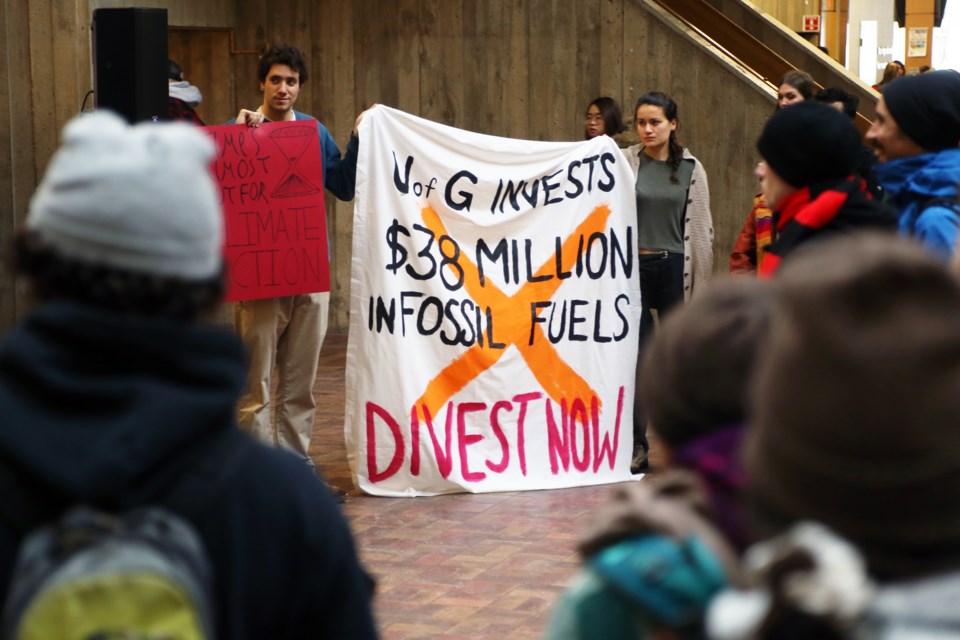 Fossil Free Guelph members and supporters gather at University Centre prior to attending U of G's Board of Governors meeting on Jan. 23, 2019. On Wednesday the university decided to divest its approximately $34 million in fossil fuel investments. Kenneth Armstrong/GuelphToday

The University of Guelph passed a motion on Wednesday to divest from fossil fuels, but a last minute amendment leaves the door open for investment in green projects put forth by oil and gas companies.

Wednesday’s meeting of U of G’s board of governors was held by web cam.

The original motion called for total divestment from portfolios within its $32.4 million endowment fund which have holdings with fossil fuel reserves.

That proposal came about after a seven year advocacy effort by the mostly student-run group Fossil Free Guelph.

In his comments prior to voting on the motion, board member Garrit Bos said the message the university was sending with full divestment in the fossil fuel industry was tone deaf, given the current economic climate in Canada, especially Alberta.

“This will still have a significant effect on a significant sector of the Canadian economy,” said Bos. “Especially now. Oil was trading in negative territory this week and I am hearing stories of very significant hardships out west.”

Bos also cited the behaviour of some of the activists as one of the reasons he was voting against the motion, including a sit in at the executive offices and a poster campaign singling out board members and the companies they represent.

“I appreciate the thoughtfulness and articulateness of most of our students, and certainly the ones who have presented to us,” said Bos. “But my personal observation of the behaviour of some of the activists has concerned me quite a lot.”

Members of Fossil Free Guelph were allowed to comment to the board. One member noted the group was thankful to be involved in the process and noted some of the direct action the group has engaged in was born of frustration in the process.

“It’s often because we exhausted other ways of expressing our message through the outlet you provided," she said.

U of G president Franco Vaccarino lauded the efforts by Fossil Free Guelph.

“They have really been an important part of this journey,” said Vaccarino.

The U of G has already reduced the greenhouse gases it produces to below 1990 levels, said a press release about the decision. It will further reduce those emissions by 80 per cent by 2050.

Other Canadian universities have made statements about divesting from the fossil fuel industry, including Concordia, UBC and Laval, said Vaccarino.

In January of 2019 the university committed to reducing the carbon footprint of its endowment fund by 10 per cent, noted Vaccarino.

“Our commitment to sustainability at the university means we want to meet the needs of today without compromising it for future generations,” he said.

The past two years has been a special time, said Vaccarino, in respect to the evolution of the information and knowledge around divesting.

The U of G’s VP of Finance Don O’Leary took time to answer why now was the time for the university brass to embrace divestment.

O’Leary said data supports long-term outlook for non-fossil fuel investments being as profitable and possibly more profitable than those in the oil and gas sector.

“We are very satisfied and quite proud to bring this recommendation to the board today,” said O’Leary. “We should set an example for others.”

An amendment added during Wednesday’s meeting would allow for the board’s investment subcommittee to consider investing in companies within the fossil fuel industry in the case of green projects to help it transition to the clean economy.

Board member Deb Stark told the board she voted in favour of the original motion at the finance committee, but couldn’t vote in favour of it as amended.

“I am feeling like I have to oppose this now because we have walked ourselves back to where we started and I don’t understand the point of this motion anymore,” said Stark.

Also voting against the motion was Bos and Chancellor Martha Billes. Despite the three "no" votes, the motion carried.

U of G has on-campus COVID testing available for students
Sep 25, 2020 11:36 AM
Comments
We welcome your feedback and encourage you to share your thoughts. We ask that you be respectful of others and their points of view, refrain from personal attacks and stay on topic. To learn about our commenting policies and how we moderate, please read our Community Guidelines.