A petition to rename a private road in Puslinch will be read on the floor of the House of Commons next month after gaining enough electronic signatures to move forward.
Jun 1, 2021 9:00 AM By: Doug Coxson 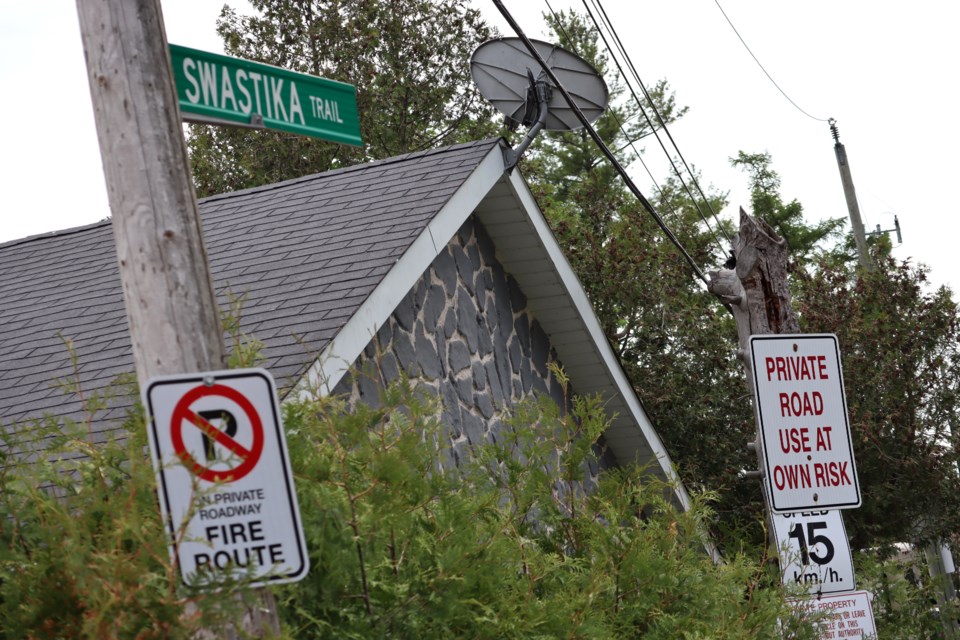 The effort to rename Swastika Trail will reach the House of Commons next month when Cambridge MP Bryan May reads a petition calling on the federal government to condemn the use of the name on public signs. Doug Coxson/CambridgeToday

A petition to rename a private road on Puslinch Lake will be read on the floor of the House of Commons next month after gaining enough signatures to ask the government to take "every available measure" to change the name Swastika Trail.

Petitioner Randy Guzar said it’s far from the final step in the ongoing saga to wipe the name off the map.

Sponsored by Cambridge MP Bryan May, the petition was launched in February with a closing date of June 18. It has close to 1,800 signatures to date and condemns use of the “swastika” as a sign, symbol, or name in public areas.”

Once presented, the government has 45 days to respond to the petition. Failing that, the petition will be presented to a standing committee to consider the matter.

May said he was willing to take on the sponsorship, even though Puslinch is beyond his riding, because he has a policy not to refuse a petition request unless he morally objects to it.

MPP Ted Arnott and Wellington-Halton Hills MP Michael Chong were both approached by the group last year with a request they sponsor the petition but declined. The group then turned to the Liberal Cambridge MP.

“It doesn’t mean I have a position on the petition,” May said. “I don’t understand the resistance to change. There may be a very valid historic reason for this name. I have not read or seen anything to suggest that.

“In this day and age with everything going on with the world this just seems like a no-brainer to be honest,” May said. “It’s a really interesting hill for the municipality to die on.”

The private road just outside of Cambridge city limits, has been a touchstone for controversy for decades because its name conjures up the symbol indelibly linked to Adolf Hitler, the Holocaust and other atrocities perpetrated by Nazi regime during the Second World War.

Asked why it’s taken this long to see any progress on the name change, Guzar said he wished he knew the answer.

“It’s so easy to fall on the side of right, it isn’t funny,” he said. “Some people will say you’re erasing history. This stops the celebration of a past mistake.”

Guzar said he’s regularly embarrassed by the name that he believes is “bound by a cord of steel to racism and hate.”

“People say really terrible things,” he said, explaining how he’s been asked if he is a Nazi sympathizer, or if his home is “around the corner from Hitler Boulevard.”

"We shouldn’t have to live with that embarrassment and humiliation."

But as unkind as those words sometimes are, it’s nothing compared to what minority and marginalized groups face on a daily basis, he said.

There have been a number of attempts to rename the road over the last few decades.

The most recent coming in 2017 when Guzar and other trail residents, including Bill Knetsch pressured the township into drafting a resolution in support of the name change.

At the time, Knetsch told council he wouldn’t be alive today if it wasn’t for the liberation of Holland from Nazi occupation during the Second World War.

But several others who voted against renaming the trail in 2017 cited the historical relevance of the swastika, well before Nazis co-opted its use and altered its appearance by changing the direction of the arms.

Jack Ward cited its use by Canada’s First Nations people as a sacred symbol.

He wrote that he has never been embarrassed by the name of his street and concluded that “if there is so much as a raised eyebrow” he considers it a teaching moment.

A sign posted by the road’s owner, Paul Wyszynski, calling Swastika Trail a privately owned road named by Ross Barber in the 1920s, has since been removed. It stated the name’s “pre-Hitler” meaning as "representing well-being, good existence and good luck."

Despite the push to rename the road, a slim majority of members in the Bayview Cottager’s Association voted to keep the name and Puslinch Township council decided not to force it.

That was when Guzar and some of his neighbours approached Warren Kinsella, a former journalist, Toronto lawyer and former Liberal Party strategist who founded the anti-hate group Standing Against Misogyny and Prejudice (STAMP).

Kinsella and his consulting firm The Daisy Group, who agreed to work pro-bono for the cause, said the petition is an effort to move public opinion on the name change, not only in Puslinch, but for the northern Ontario town Swastika as well.

“People power works,” he said in a phone interview with CambridgeToday. “We’re trying to harness that.”

In addition to support at the federal level, Kinsella said they’re working with senator Linda Frum, the Simon Wiesenthal Center and lobbying with representatives at Queen’s Park to add momentum to the cause.

He said he believes the township has a number of tools at its disposal to change the name of the road, most of which aren’t going to “cost them a nickel.”

Expropriation would be a last resort, but even then Kinsella said he’s amazed it’s taken as long as it has to do what’s right.

“To me this is a no-brainer. It’s not ‘woke’ culture, it’s just being awake and being sentient.”

The issue has become of particular concern in recent weeks with the rise of anti-semitism around the world, triggered by the Israeli-Palestinian conflict, he said.

“It’s still there. The beast is still awake.”

At its May 26 council meeting, Puslinch councillors went in-camera to hear information provided by the township’s solicitor on Swastika Trail.

Guzar and Kinsella said they don’t know why the township consulted its lawyer about the road.

Reached for comment last week, Coun. John Sepulis said he was unwilling to offer an opinion on the Swastika Trail debate. Sepulis was the lone council member to vote in favour of the name change in 2017.

Founded in Guelph, Communist Party of Canada celebrates a century
May 26, 2021 8:00 PM
Comments