Is there life on Mars? U of G grad works at finding out

Scott VanBommel returns to his alma mater to discuss his space-related research
Dec 2, 2019 9:00 AM By: Barbara Geernaert 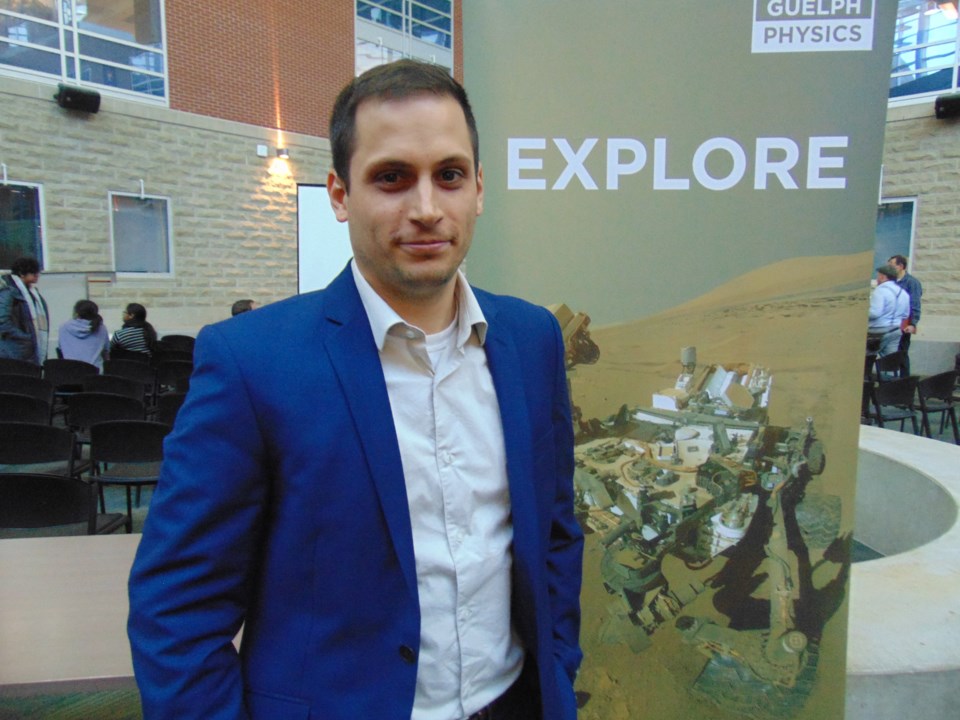 VanBommel recently returned to his alma mater, the University of Guelph, to share his terrestrial and space exploration experience as part of the university’s Science, Technology, Engineering and Mathematics (STEM) week.

His talk, The Role Exploring Mars Plays in Unraveling Earth’s Origin Story: A Physics Perspective, discusses the many theories and new areas of inquiry about life on Mars, on Earth and in the universe.

“There is much evidence about Mars and how it affects life on earth,” VanBommel said.

According to VanBommel, when looking at the history of Mars, about the time when life began on Earth about 4 billion years ago, Mars could have had drinkable water on its surface. Whether or not life was there, the conditions were right in some locations for life to survive, at least for a short period of time,

A research scientist in the Earth and Planetary Sciences Department’s Remote Sensing Laboratory at Washington University in St. Louis, VanBommel is also an astronaut candidate for the Canadian Space Agency, where he was shortlisted among 72 candidates from an initial 4,000 applicants.

“Mars wasn’t always what it is now in its current state,” said VanBommel, who spent six weeks in Antarctica on a meteorite hunting expedition in 2018.

“Meteorites fall all over the earth. Over 18,000 – 84,000 fall every year and they fall all over. There are only a couple places on earth you can find them well preserved. The first is northwest Africa and Antarctica,” he said.

So, VanBommel set out into the frozen desert of Antarctica where, as part of an eight-person team, he explored a heavily crevassed area travelling mainly by skidoo and airplane.

“They say, if you go there, you will find meteorites but its not that simple. It’s a bit like finding Waldo, but we did actually find them,” he said.

“Sleeping in a tent and in 24-hour daylight, accompanied by a long shadow, it’s just you and the voices in your head. But it is so magical. It’s so quiet and still. What hits home for me, is thinking about how stunningly beautiful it is, so pristine beyond anything,” he said.

“It was amazing to go and to be able to contribute to scientific research.”

VanBommel completed undergraduate and graduate studies at the University of Guelph and has a PhD in physics.

After receiving his PhD in 2017, VanBommel continued at U of G as a post-doctoral researcher and was a member of the science and APXS (alpha particle X-ray spectrometer) teams for the Curiosity and Opportunity rovers led by physics professor Ralf Gellert.

Dr. Gellert physically built instruments that are now on the surface of Mars. Currently, he oversees an instrument on Curiosity. There is an operations center for said instrument in the physics building at the U of G.

Successive rover missions including Spirit, Opportunity and Curiosity have led to many discoveries including evidence of water-rock interactions, subsurface frost, basaltic plains and the formation of clays.

But running a rover is much more complicated than seen on an old episode of The Big Bang Theory.

It’s a very delicate scientific undertaking which takes a great amount of planning according to VanBommel.

“But space exploration is a joint venture between many fields.”

And how does physics play a part?

“It’s how we communicate with space, it’s how we power our rovers and operate them, take pictures and use radiation sensors. And with the APXS, we can analyze rocks on Mars, see what they are made of without even touching them,” VanBommel said.

For a second year, the University of Guelph has hosted STEM week to raise public awareness.

Along with guest speakers, the event hosts events including contests, a Nano Night and Pub night.

And about 500 students from local schools also attended the Guelph Civic Museum to learn about physics from the university’s outreach team.

“We are on the cutting edge of science,” VanBommel said.

“If we do ever find that life existed on Mars and that we came from the same source, it will either mean that life that was on Mars is the same as life on Earth. Either it came from Earth or we are all Martians.”

London-based company looks to bring sustainable grocery delivery to the region
Aug 31, 2020 7:00 PM
Comments
We welcome your feedback and encourage you to share your thoughts. We ask that you be respectful of others and their points of view, refrain from personal attacks and stay on topic. To learn about our commenting policies and how we moderate, please read our Community Guidelines.