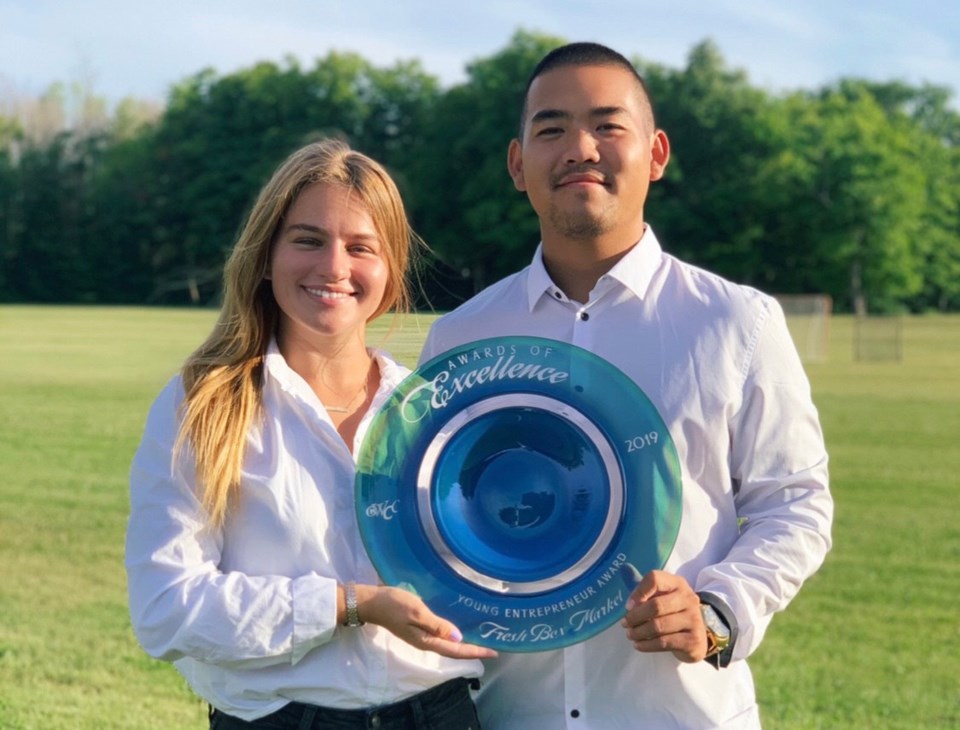 Man Vo and Caitlyn Debrusk begin their day as early as 2 a.m. to hit the road and meet with farmers across the region who supply local produce for their business, Fresh Box Market.

A typical morning circuit takes them east towards Niagara, then South to Leamington, and back north through the London area to pick up fresh, seasonal produce from a number of farms along the way.

By 7 a.m., they’re back at their warehouse in Fergus, packing boxes for next-day delivery to households and restaurants. Since its launch two years ago, Fresh Box Market has enjoyed a huge surge in demand, particularly as the pandemic has prompted many people to switch to online ordering and delivery.

“With the way the community has reacted, we’re surprised but of course we’re really thankful,” said Vo. The couple is recently engaged and Vo, 23, and Debrusk, 20, were recently named Young Entrepreneurs of the Year at the Centre-Wellington Chamber of Commerce’s Awards of Excellence Gala.

The business idea originated at the Fergus Farmers’ Market, where the couple met five years ago. One day, they posted on the Fergus Buy and Sell Facebook page, advertising pre-made boxes of leftover produce from their families’ market stands.

“Within 20 minutes, we sold the first 12 boxes,” said Vo. “That motivated us that there's a market for it.”

They started advertising weekly boxes, using Debrusk’s garage as a makeshift warehouse, before quickly realizing that they needed more space to keep up with popular demand. They signed their first lease for a storefront at 600 Cortland Street in Fergus, and officially launched Fresh Box Market in December 2018.

“It just kind of took off from there … week after week it just blew up,” said Vo, adding that they sold as many as 400 boxes per week within their first three months of opening. Since March, they have been selling closer to 1,000 boxes every week, with products from 25 different suppliers.

Building on the knowledge and skills acquired through years of working at the Fergus market, the couple admits that online businesses are an entirely different venture. They have learned some valuable lessons along the way, like incorporating digital technologies to map out an efficient pick-up and delivery route, and lining up a back-up supplier, in case of damage from a heavy rainfall, for example.

“We learned that the hard way … when we’ve gone down to the supplier, and they don’t have strawberries because of the downpour the night before. Finding out last minute sucks, but we’ve learned that we need to have another supplier lined up right away,” said Vo.

Earlier this month, they signed a lease for a 3,500 square-foot warehouse space on Silvercreek Parkway in Guelph, which they also plan to use as a storefront and pick-up location in the city. They hope to have the space ready by the start of next year, in time for winter deliveries of imported goods.

Vo and Debrusk say their business differs from other subscription-based produce delivery services because of its flexibility and convenience. Customers can choose when they would like to order a weekly box, and they can opt out any time without being locked into a subscription. The boxes are pre-made with eight to 10 items and are non-customizable, which Vo says gives customers the chance to try new things.

“They get really creative with items that they're not used to getting at the grocery store. That pushes them to eat healthier and use what they pay for,” he said, adding that they reduce waste wherever possible by encouraging suppliers to use bins instead of plastic bags and preparing the boxes with minimal packaging.

Fresh Box Market delivers weekly on Thursdays and Fridays, and their storefront in Fergus is open for pick-up on Thursdays from 12 p.m. to 7 p.m. Orders can be placed online through their website or Facebook page and all produce is guaranteed to be sourced within 24 hours of delivery.

Dyeing to preserve the colours of nature
Nov 16, 2020 1:50 PM
Comments
We welcome your feedback and encourage you to share your thoughts. We ask that you be respectful of others and their points of view, refrain from personal attacks and stay on topic. To learn about our commenting policies and how we moderate, please read our Community Guidelines.