A losing battle against an ash killer 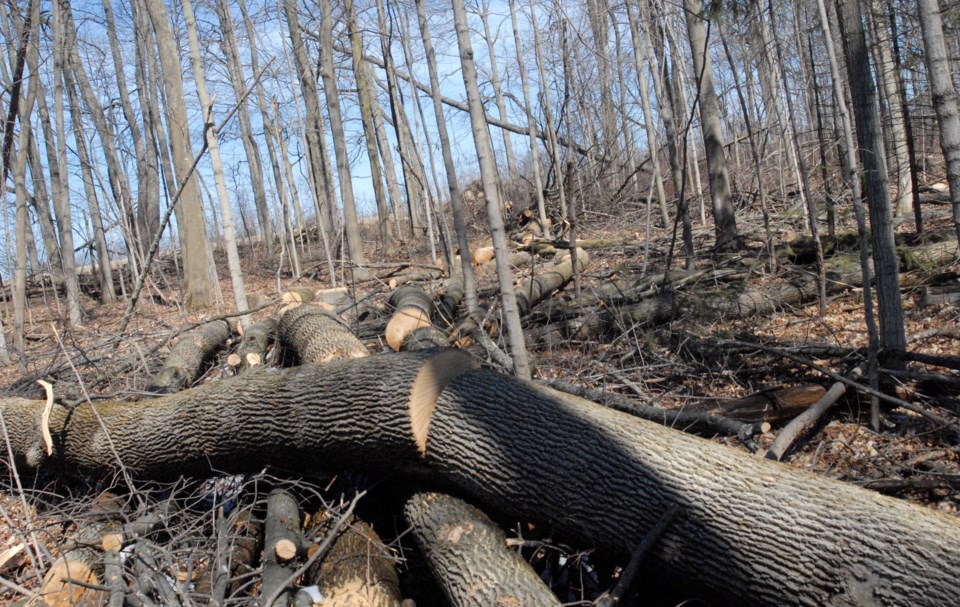 Most of the ash along the Marden Tract trail just north of Guelph has been taken down, part of the losing battle against emerald ash borer. (Rob O'Flanagan/GuelphToday)

The losing battle against the emerald ash borer continues in Guelph and the surrounding area, as forestry experts take measures designed primarily to protect the public.

Nothing much can be done now to keep the little green bug at bay and the trees alive, those experts say. But there is some hope for ash survival in the future.

Martin Neumann, Guelph’s manager of parks operations and forestry, said Thursday it is likely that most ash trees in Guelph are now infested with the beetles. Once a tree is compromised, he said, it has about a year or two to live.

Dead trees will eventually fall, and so they much be cut down wherever they pose a threat to people and property. Proactive management is happening now to ensure public safety in the future, he indicated.

The City of Guelph has a 10-year EAB plan pegged at a cost of $15-16 million. It has been estimated that there are about 10,000 ash trees in the city’s canopy. Ensuring the safety of people and property is a top priority, as is the replacement of the tree inventory that is lost.

Only a small number of trees are being treated in an effort to save them, and the same is true on Grand River Conservation Authority property, particular in parks where ash is a prominent aesthetic feature.

The trail through the small protected forest has a high number of mature white ash trees along it, and most of those have recently, and carefully, been taken down by an arborist, Wu-Winter said. Other ash on the property will be left, as will ash saplings.

There is a chance that some young trees may have resistance to the infestation, but that is uncertain. There is also a possibility that a natural phenomenon will eventually eliminate the emerald ash borer, but that too is speculative.

Neumann is familiar with the ash removal that’s taken place as the Marden Tract, and he said the only thing close to that measure in Guelph was carried out on a section of Preservation Park.

“There’s a patch at the north end of Preservation Park where there was a lot of hazard trees and/or ash trees, and it looks almost as drastic as parts of the Marden Tract,” Neumann said. “But we don’t have too many places where ash dominates the natural areas. Other than Preservation Park we haven’t had to deal with those yet because the EAB infestation is not far enough along to push us to do it that quickly.”

The city doesn’t want to act too soon to cut trees down, since they still have about two years of active life left in them, he said. But to act too late would make the trees hazardous to the public and city workers who have to go in and cut them down, he added.

Neumann said the emerald ash borer is everywhere, with most trees infested, but it takes two to three years for trees to die.

Wu-Winter said the Marden Tract is “about as bad as it’s going to get” on GRCA’s properties. On the plus side there are a good number of saplings of other species developing underneath those removed ash. They will have a better chance of developing now.

“In general I think that forest will be OK,” he said, but he agreed that the visual impact of the cutting is dramatic. “We needed to remove those because of hazard tree issues.”

Wu-Winter said it is not known whether ash will recover, or whether small ash trees will also be attacked by the beetles immediately, or if there will be a resurgence of ash followed by a resurgence of the emerald ash borer.

“We don’t know that,” he said. “Although it’s kind of like gazing into a crystal ball, I think ash will persist on our landscape, perhaps in a similar way that elms have. In the long-term we have to have some sort of response from nature that controls the emerald ash borer, and we anticipate that will come.”

Not all ash will be cut down on GRCA property, only those areas that are hazardous, Wu-Winter added – along trails, road systems, near any buildings, or residences. Much of that work will take place over the next three to five years.

Some of the wood is salvaged and turned into lumber or firewood. Other logs are left on the ground to foster new growth and habitat, and to avoid damaging smaller trees during removal.

“It’s a significant problem for us,” he said. “In our parks and nature centres alone we have inventoried over 14,000 ash trees, and those are only the hazard trees. That 14,000 is just a drop in the bucket of ash trees that exist on GRCA lands.”

There is some preliminary research coming out of Michigan that suggests that small amounts of white ash are persisting despite widespread infestation, he added.

Proposed Arkell Road development goes before council for first time
May 28, 2020 8:00 AM

One good deed helps out another good deed on a sweltering Wednesday afternoon
May 28, 2020 7:00 AM
Comments
We welcome your feedback and encourage you to share your thoughts. We ask that you be respectful of others and their points of view, refrain from personal attacks and stay on topic. To learn about our commenting policies and how we moderate, please read our Community Guidelines.