The Guelph BagBank Program sees reusable bags left at grocery stores for people to share
Feb 28, 2020 9:49 AM By: Anam Khan 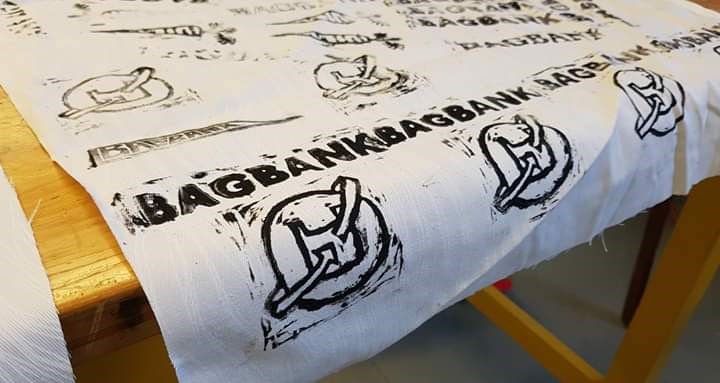 A BagBank bag in the making. Supplied photo

A new initiative is taking a creative approach toward reducing the use of single-use plastic bags around Guelph.

Created by University of Guelph students Carys Owen and Cameron McGlade, the BagBank works by setting up bins of handmade cloth bags in grocery stores across Guelph. Customers can then use these bags, bring them home and return it at any participating stores.

“There was no easy access to reusable bags,” says Owen.

She says shoppers either buy plastic bags or buy reusable bags when they forget their own bags at home — both situations she describes as unsustainable in the long run.

“I think grocery stores are like the prime example where people get stuck in a situation where that’s the only choice they really have. So we wanted a solution to bridge the gap because we find that people can't afford to go in and take $5 extra for another reusable bag,” says Owen.

“So we wanted to provide a free service where you could just borrow them and then bring them back,” says Owen who then looked at a similar program in the US called Boomerang Bags.

She says because buying another reusable bag comes with an extra cost for the customer, using plastic bags becomes a social issue as well as an environmental one.

On Sunday at 10C on Carden Street the program will hold a reusable bag drive from 9:30 a.m. to 3 p.m. where people can donate reusable bags to the program. Owen says while she understands that people might take the bags and never return them, she doesn’t see that as a problem because the initiative aims to have a constant supply of bags. And if someone takes a bag to keep and re-use, the program doesn't see it as a loss on their part.

Owen says apart from the sustainability aspect, the initiative also brings the community together through hands-on work where volunteers work together to fashion the bags created by donated fabric from thrift stores.

“We’re trying not to buy anything new,” she says about the initiative using donated tools to craft the bags and logos.

She says through volunteering with the sustainability office at the university, McGlade and she were able to recruit volunteers who also shared a passion for saving the environment.

“The university has been super supportive of it. We have some collaboration with the co-op book store on campus as well as the horticulture club for providing bags.”

Currently, the program is trying to get access to grocery stores near the U of G campus because they’re frequented by a large volume of students.

“We wanted to be simply available to everyone regardless of money. So we wanted to be like a non-profit or definitely a free service,” says Owen.

She said when she first started the program, people were so thrilled that they immediately reached out to her offering their help.

“I had like 50 plus volunteers originally signed up to want to help. So we ran a couple of sewing workshops over the summer,” says Owen

“I think it's something that people have been frustrated about for a long time especially in Guelph which is such a green city. We have this image of being so environmental but then you look at how much waste we're actually still producing.”

She says the end goal is to have a self-sufficient program where people can use these bags, drop them off in participating locations scattered around the city and not worry about bags going missing all the time.

Owen says she is willing to share the program details with any community that wants to implement it.

For now, she says she would like to focus on the program locally for it to succeed. She says with city support, the BagBank can also benefit the circular food economy and help the initiative become sustainable on its own.