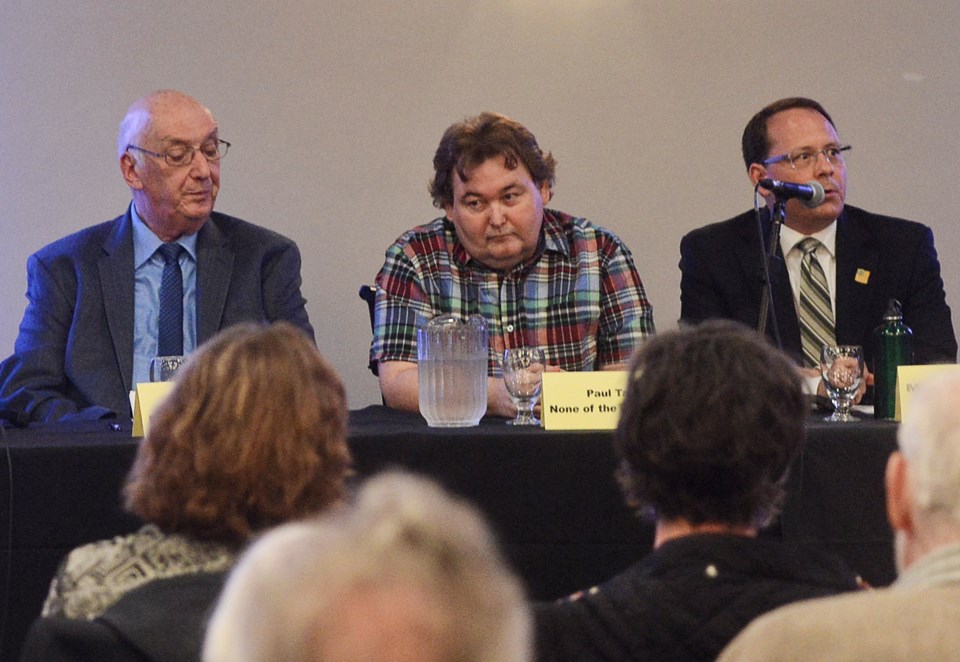 None Of The Above Party candidate Paul Taylor is flanked by Ray Ferraro, left, and Mike Schreiner at the all-candidates debate at the Italian Canadian Club Thursday, May 10, 2018. Tony Saxon/GuelphToday

The local candidate for the None of the Above Party said this week’s all-candidate forum was so well run that Guelph should be called on to run a leaders debate.

“It was very respectful. Everybody showed complete and utter respect and they were great questions from the audience, which was inclusive and all of the parties were invited,” said Paul Taylor by phone Friday. “Maybe Guelph should do a leaders debate and show how it’s properly done.”

Taylor is running in Guelph for the None of the Above Party (Ontario), a party which doesn’t believe in whipping votes and which leaves open the door to the possibility of hand-picking cabinet ministers from a number of parties.

“Imagine a Green MPP being the minister of the Environment — he is going to be outspoken about any issues with the environment — or an NDP member as minister of Labour. That would be a very powerful cabinet in government. That’s what we are fighting for,” said Taylor.

“There’s no party whips so when I go, I speak for Guelph first. That’s something I have always believed in — why do these parties go and say they can’t speak against something because of the party platform, but they are our local representative,” he said.

The party appealed to Taylor, in part, because his personal loyalties have shifted over the years.

“I went from NDP in my views to Green. I didn’t go so much Conservative, but to Liberal — I went across the board in many ways,” he said.

Taylor drove transport trucks for about 20 years, but became injured 20 years ago. Now he advocates for injured workers.

He said it took him more than 15 years to get through the Workplace Safety and Insurance Board system, including a number of appeals. Taylor said he has now filed a civil suit against WSIB, which is winding through the courts.

Taylor was retrained to work in information technology with assistance from WSIB, but decided to put himself through college and university programs, including business administration management, labour studies and political science.

Taylor is also against the use of so-called precarious workers by corporations.

“I have a wide understanding about the worker movement and precarious employment and temp agencies where today you don’t know if you are working tomorrow,” said Taylor. “I worked about 65 to 80 hours a week and I did that for about five years — but I was always considered temporary. How can you logically define that as temp work?”

He is also interested in tackling road infrastructure and public transit.

A single father, Taylor moved to Guelph about five years ago with his daughter.

Taylor said he saw problems with the health care system first hand when his daughter broke both of her arms.

In two later visits, he said the wait times were five and six hours.

He said he became fed up, which led to his decision to run.

“We all have a stake in the issues, but actually becoming a politician — I think I always thought it wasn’t possible. As you get older, you start realizing anything is possible,” said Taylor.

Helping seniors stay active and connected while self isolating
Apr 7, 2020 1:30 PM
Comments
We welcome your feedback and encourage you to share your thoughts on this story. We ask that you be respectful of others and their points of view, refrain from personal attacks and stay on topic. To learn about our commenting policies and how we moderate, please read our Community Guidelines.