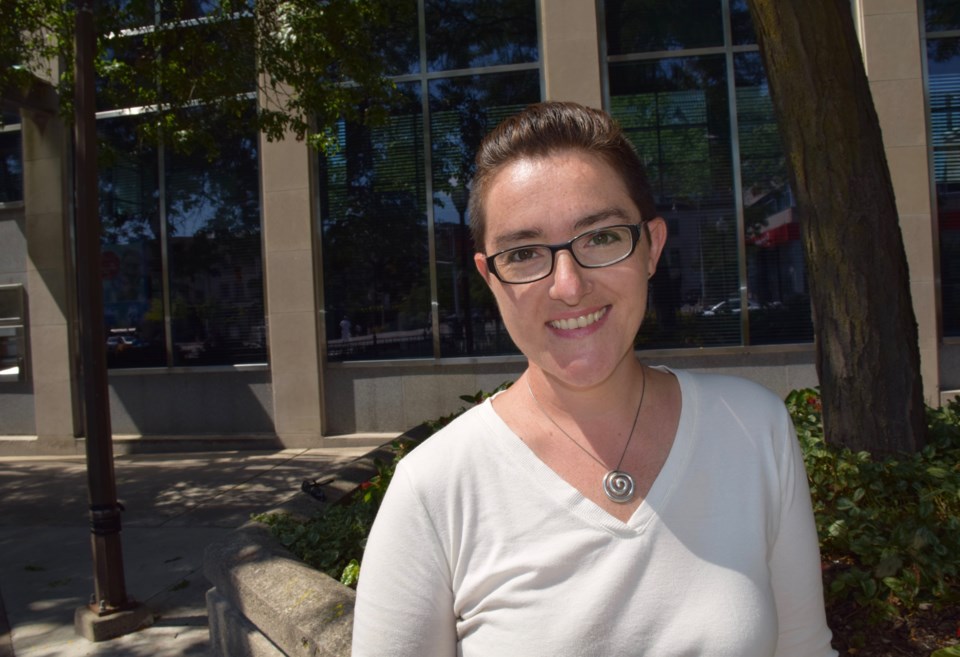 Christine Lafazanos is one of the facilitators for the upcoming Death Cafe at the Red Brick Cafe downtown. (Rob O'Flanagan/GuelphToday)

Death Café. It’s may sound Gothic, even morbid, but it is far from it.

The second in an ongoing series of Death Café gatherings is set for Tuesday, Aug. 30. It is a safe, supportive venue for people to speak frankly and personally about the reality of death –  what we think and feel about it, how we have experienced it, and the impact it has in our lives.

The first in the series, held back in April, packed the Red Brick Café on Douglas Street, surprising the organizers, and offering clear proof that many in Guelph want to have a collective conversation about the subject.

The format is simple: Groups of three to six people sit at tables, a hot or cold beverage in hand. They introduce themselves and the dialogue begins. Guidelines are set out by the facilitators to begin, but those guidelines are minimal.

Next Tuesday’s reprise is at the same venue. Due to limited space attendees are encouraged to arrive early for the 7 p.m. start. It runs until 9 p.m.

“The underlying purpose of the Death Café, on a grander scale, is to shift the cultural perception and conversation, or lack thereof, around death and dying,” said Christine Lafazanos, a certified life-cycle celebrant. She is one of the facilitators of the café, along with death midwife Marion Willms.

That cultural shift aims to transform the conversation around death from one of fear or avoidance, to one of familiarity and comfort. A comfortable setting helps get the conversation going. A non-judgmental, non-doctrinal atmosphere is encouraged.

“We live in a death denying culture that, due to some of the influences of capitalism, see people’s value and worth associated with youth, action and productivity,” Lafazanos said. “As an extension of that we don’t value our elders, and instead see people a useless and over-the-hill. Aging is something to fight against, and dying is a battle you have lost.”

Those attitudes make it very difficult to talk openly about death, or to face the undeniable reality that death comes to us all, she indicated. We fear it and deny it.

The space is not one for debate or argument on the basis of belief.

“We want to create a respectful space for people of all different beliefs and non-beliefs to feel comfortable sharing their perspectives,” she added.

The people of Guelph appear hungry for these sorts of group spaces where conversation about death can happen, Lafazanos added.

“For all sorts of reasons people aren’t having these conversation,” she said. “Because we deny death, we think of talking about death as depressing, and something to avoid. This is something that is present for people every day, in many ways, but they’re not given room to explore that.”

She added the outpouring of celebration and grief over the terminal cancer diagnosis of The Tragically Hip lead singer Gord Downie is an “wonderful example of what can happen when we grieve in a healthy and mindful way.”

We don’t do that enough, she said.

The Red Brick Café in downtown Guelph is at 8 Douglas Street, around the corner from St. George’s Square. The event is free.