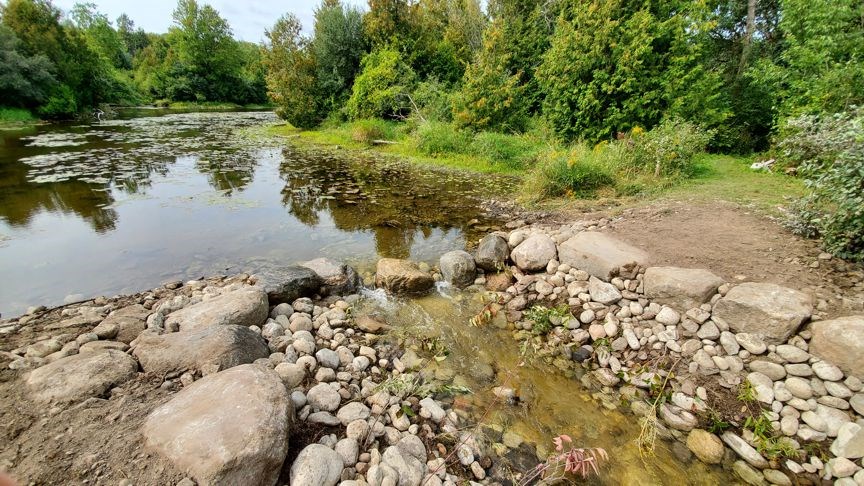 The naturalized opening of boulders, called a cross vane, at the top of the East Branch of the Eramosa River. Photo provided by EMERCA

NEWS RELEASE
VILLAGE OF EDEN MILLS
*************************
The village of Eden Mills, known for its action on environmental issues, has accomplished their goal of installing a naturalized opening in the weir at the East Branch of the Eramosa River.

The naturalization project was spearheaded by the Eden Mills Eramosa River Conservation Association (EMERCA) who lease the property along the Eramosa River shoreline from Charles and Anna Simon. EMERCA hired R&M Construction to install the boulder rock vane to the exact specifications of the engineered drawings created by Water’s Edge, ensuring that all design objectives were met.

“It was a pleasure to work with Harry Reinders of R&M Construction and his professional crew on this project. They used their extensive expertise to build the rock vane in just a few days. We are very pleased with their work.” said Marilyn Baxter, EMERCA President.

Charles and Anna Simon, property owners, are “pleased with the simple, elegant design” of the naturalized opening in the dam at the East Branch. “This maintenance-free natural design meets all the objectives of the Eden Mills Working Group – to allow fish passage and maintain flow in the East Branch during the drought times in the summer, while protecting property downstream from increased risk of flooding” said Charles Simon.

Adjacent downstream property owners, Ed Langevin and Norah Menzies had this to say, “We are so pleased that this has actually happened! The work of replacing a metal weir and naturalizing the opening of the East Branch of the Eramosa River ensures equitable flow in both branches of the river to create and maintain a healthy aquatic habit.”

About a dozen people visited the completed project site and the most common comment about the new opening was ‘it looks so natural!’ When the vegetation is fully regenerated in the spring, the site will look magnificent.

All the stars aligned to implement the project in September 2020. To list just a few:

Essential to the success of the project was the enthusiasm of the volunteers who prepared the site in advance, and cooperative, supportive adjacent landowners along with the Eden Mills community endorsement.