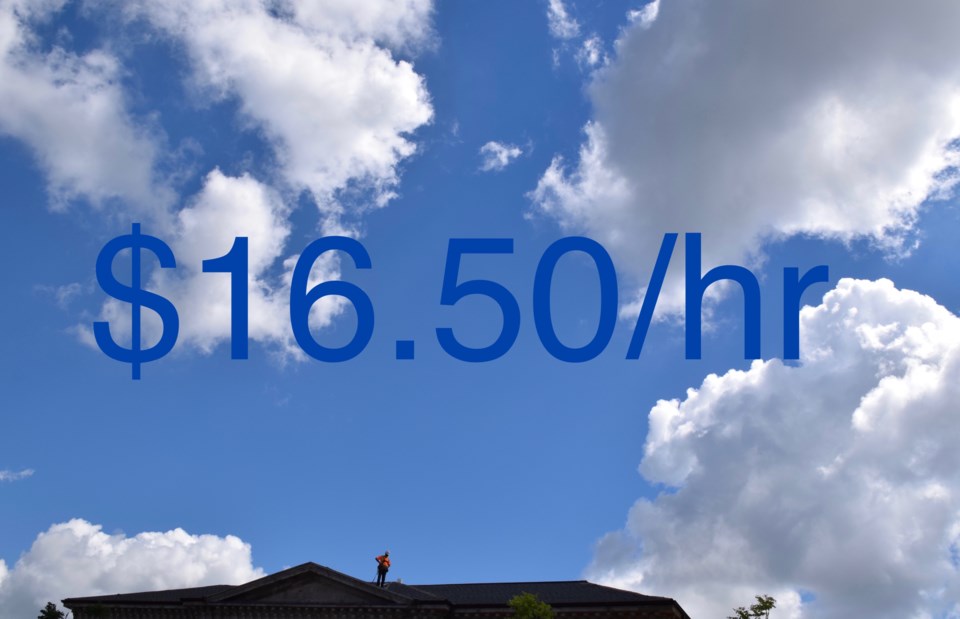 More than a blue-sky dream, $16.50 per hour is this area's living wage for many. Rob O'Flanagan/GuelphToday

More than a blue-sky concept in Guelph, the practice of a living wage has been embraced by a number of local employers over the past year, including a national firm based here.

Next Tuesday, as part of Living Wage Week, those Guelph and Wellington “Living Wage Employers” will be recognized for their commitment to pay a living wage.

The Guelph and Wellington Task Force for Poverty Elimination started the recognition program one year ago.

In this area, that living wage has been determined to be $16.50 per hour, the conservative estimate calculated by the Poverty Task Force with the support of the Canadian Centre for Policy Alternatives.

It represents the wage two full-time working parents in the area need to earn hourly in order to raise two children and meet their basic needs.

A total of 11 local employers have made a commitment to pay direct and indirect employees that amount. Some pay both full- and part-time workers the living wage, while others pay the amount to full-time people.

“Last year was really exciting, not just because we launched the program, but because Guelph also signed on the first national living wage employer, The Co-operators,” said Randalin Ellery, coordinator of the Poverty Task Force. The insurance co-operative is based in Guelph. “That was big for the movement across the country.”

Locally there is a good mix of non-profit organizations, private businesses, retailers, and trades companies that have joined the living wage movement, Ellery added.

Among all of them, she said, there is a recognition of the vital importance of paying a living wage to their employees, helping to ensure they can support their families and have a good quality of life.

“Not only have they signed on to the program, but they have been champions of the idea in the community,” she added. “They talk about the importance of paying a living wage, and the impact it has had on their employees, in terms of employee retention and health, but also how it has been good for the local economy.”

She said research demonstrates that when people who are low-wage earners receive an increase in pay, they tend to spend that extra money locally.

“It is absolutely catching on in Ontario,” she said. “But out west they are light years ahead of us. There are provincial living wage programs in British Columbia, and really big employers have signed on to that program, she said.

Next Tuesday morning from 9-10:30 a.m., an employer recognition and learning event will take place at Innovation Guelph, 111 Farquhar Street.

The event will feature a keynote address by John Stapleton of the Metcalf Foundation. He will discuss the working poor and the role employers can play to improve their lives. Local employers will speak of the economic benefits of paying a living wage.

Participants in the program are listed at http://www.gwpoverty.ca/the-living-wage/.

Guelph officer guilty of assault should be allowed to return to work, say two superiors
Oct 28, 2020 4:59 PM
Comments
We welcome your feedback and encourage you to share your thoughts. We ask that you be respectful of others and their points of view, refrain from personal attacks and stay on topic. To learn about our commenting policies and how we moderate, please read our Community Guidelines.