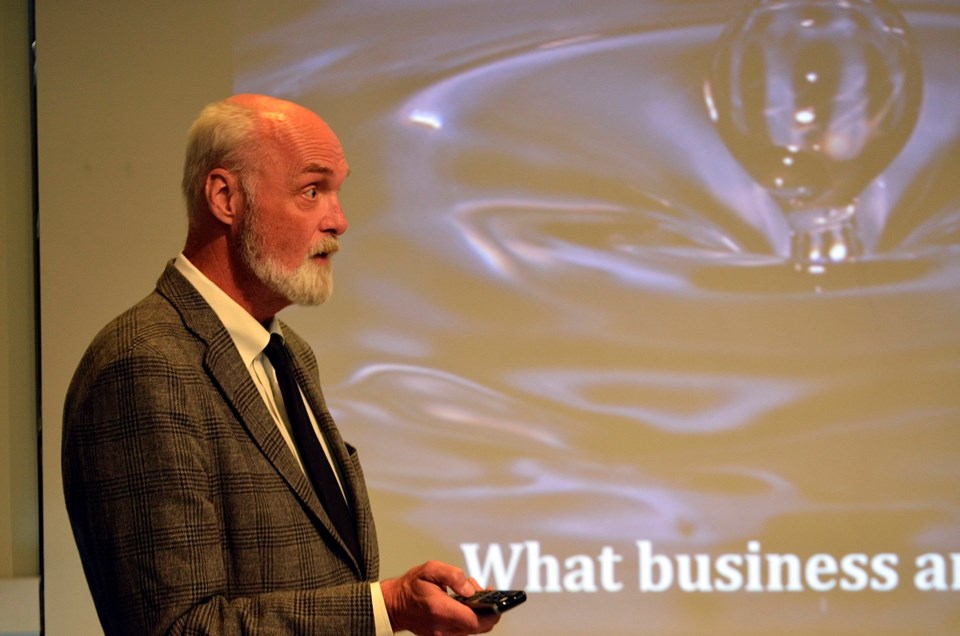 Stephan Abram speaks on the future of libraries at the Guelph Public Library main branch. Troy Bridgeman for GuelphToday

Rebranding that image and embracing change is the best way to ensure libraries remain a vital part of every community, Abram said in Guelph recently.

“We can’t control change only our attitude toward change,” said Abram.

He said libraries are traditionally underfunded and that is largely because they haven’t done a very good job at defining their business model.

“We have to ask, what business are we in,” he said.  “Are we in the business of books or are books the foundation of what we are trying to achieve?  We are in the question business and questions deserve quality answers.”

“We have been doing tons of research,” he said.  “I’ve got over 2,000 reports on the value and impact of all types of libraries on my website.”

He shared some of his research and observations about the Changing Roles of Libraries during a presentation at the main branch of the Guelph Public Library.

“I’ve heard him speak a number of times,” said Steve Kraft, CEO of the GPL “He is very inspirational and he really makes you think.”

“It is important to keep the conversation about libraries going,” said Cunningham. “We have to find a good balance between new and old.”

Abram said the traditional role of libraries doesn’t have to change but how they carry out that role must move with the times.

“We are change agents,” he said. “If we don’t change we are basically fossilizing. Change is moving significantly faster.  What used to be a 20 or 100-year arc is now a two-year arc.  More information has been published in the last two years than in all of history.”

He said the Internet, e-books and other new digital technologies are not a threat to the future of public libraries but are actually creating opportunities for them.

“Google was built by librarians,” he said. “Librarians built this infrastructure but we are questioning some of the unintended consequences of some of the stuff we built.”

One of those unintended consequences is the perception that libraries are antiquated institutions that have been effectively replaced by Internet search engines.

Nevertheless, building and maintaining libraries is often viewed as a waste of taxpayers’ money.

“Libraries are not a cost,” said Kraft. “They are an investment.”

That is supported by Abram’s research.

“Every dollar invested in a library delivers a 400 to 600 per cent return,” said Abram.  “That is a conservative estimate.”

The contribution to education is often overlooked.

“Public libraries have got zero dollars from the Ministry of Education,” he said. “We know that children that go to an early years program at the library and have stories read to them have a letter grade difference by grade eight.

We know that kids that have a well-run, well-staffed school library have a 20-point increase in their standardized testing scores.”

The impact on society and innovation is significant.

“We have this image that libraries are about nouns but they are about verbs,” said Abram.

“So, it’s not books. It is reading. Every day and every way libraries are throwing pebbles and we don’t know what that pebble is going to do but there is a ripple effect.”