People are encouraged to stop and listen to the seniors sitting on the benches in an effort to transfer their wisdom to a younger generation
May 24, 2018 4:18 PM By: Kenneth Armstrong 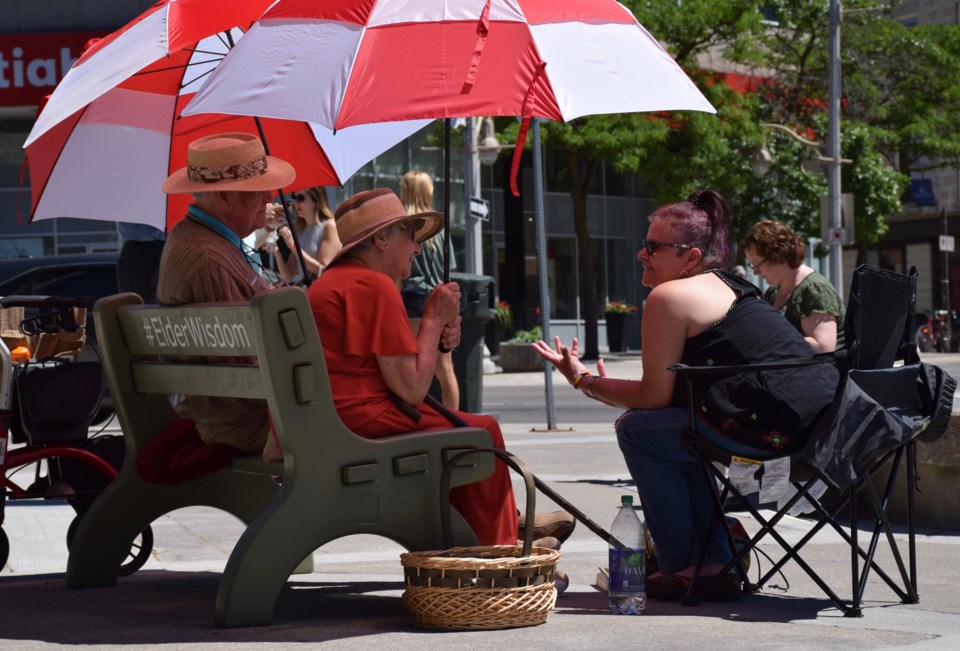 There's nothing particularly special about Schlegel Villages' #ElderWisdom benches, says the campaign's coordinator, the real magic happens in the transfer of knowledge between the senior citizen sitting on it and the people who stop to listen.

"After the flag has been raised we will invite participants and community members near by to sit on the green #ElderWisdom benches and have a conversation with residents from The Village of Arbour Trails and The Village of Riverside Glen," said Poveda.

The benches are green and are marked #ElderWisdom on the back, but Poveda said otherwise, the bench is just a bench.

"What makes it important is that a senior is there and a participant — whoever it may be —  is sitting with them recognizing them as a person, someone worthy of that conversation, of the time spent listening to them," said Poveda. "The bench is an opportunity for that conversation to happen and what makes it important is the people who are having it."

June is Senior's Month and as such the benches will be seen throughout Ontario wherever Schlegel has seniors’ villages, including Toronto, Kitchener, Windsor and London.

The rest of the year, those benches reside in the two local Schlegel Villages homes.

"It's that ever-present representation of how important it is to acknowledge our seniors and take into account what they still have to offer," said Poveda. "It's really important we keep that message going throughout the year."

This year marks the third year Schlegel Villages is hosting the #ElderWisdom campaign.

"In the first year, we did community events. In the second year we went to high schools around Ontario to bring the benches, as well as our residents, to speak to young adults about the importance of seniors and recognizing ageism in all its forms," said Poveda.

"This year, we are once again taking benches into the community, focusing on city halls as well as other community locations where we can reach all kinds of demographics with our message," she said.

"Seniors are a really important part of our community and they want to share their knowledge and what they have to offer, just to make sure they are seen as people and not just as a part of the community that does not need representation or advocacy," said Poveda.