Health Minister and deputy premier Christine Elliott made the announcement of the Guelph and Area Ontario Health Team on Friday in Guelph
Nov 29, 2019 8:31 PM By: Kenneth Armstrong 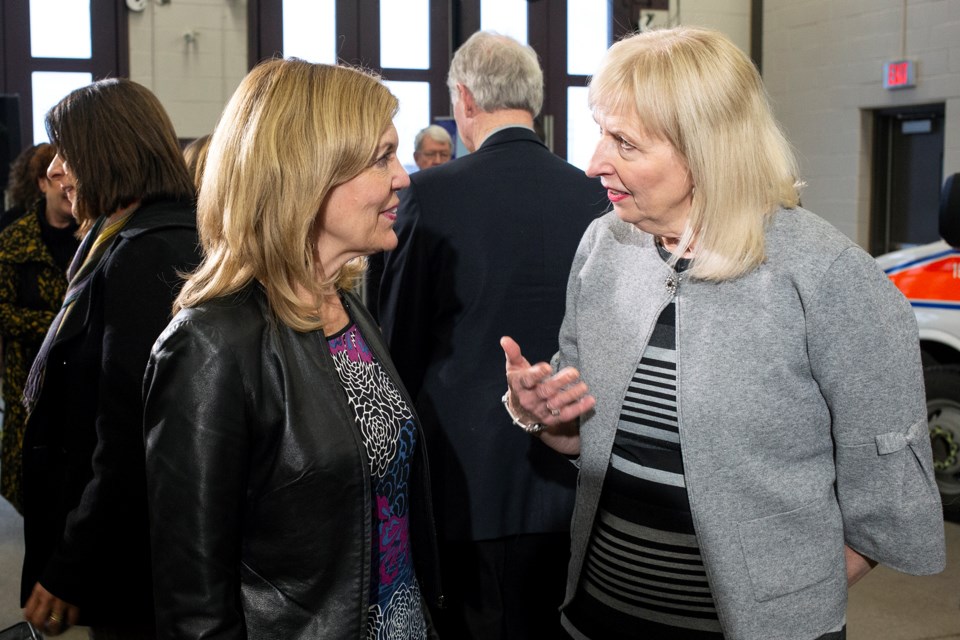 The Ontario government is rolling out a new model for the way health care is delivered at the local level and Health Minister Christine Elliott was in Guelph Friday to announce the new Guelph and Area Ontario Health Team as one of the first such teams in the province.

The Guelph and Area Ontario Health Team will encompass health care providers in Guelph, as well as Puslinch, Rockwood and Erin.

The plan is to offer 24/7 navigation and care coordination services for patients and families who are navigating the health care system in Guelph and area. Local health care providers will expand integrated services and partnerships, with an initial emphasis on palliative care and mental health and addictions.

The local Ontario Health Teams will receive funding from the newly-created Ontario Health agency. The idea is to bring together local health care providers to work as a single team.

Some communities have chosen to take a wait-and-see approach to applying for the new program, but health care providers in Guelph were eager to be among the first to apply, said Guelph General Hospital president and CEO Marianne Walker.

Guelph General Hospital is one of 12 local stakeholders currently signed on to the program. Others include the Guelph Community Health Centre (CHC) and Guelph Family Health Team.

Walker believes one of the reasons the application for the Guelph and Area Ontario Health Team was approved so quickly is because many of the providers in Guelph have been working together to break down silos in delivering local health care for years.

“What we demonstrated is that we already have a great foundation to build upon,” said Walker. “We are very optimistic we will be one of the leaders in the province because of this.”

Raechelle Devereaux, executive director of CHC, agrees. She noted a number of ways in which health care providers in Guelph have already been working together.

“We have so many examples of integrated service teams, but they are examples. They are not the rule,” said Devereaux. “This is about making it the rule.”

The Ministry of Health asked applicants to the program to select two areas of health care to prioritize. The Guelph team selected palliative care and mental health and addictions.

Speaking after Friday’s event, Devereaux referenced a 2006 article penned by Malcolm Gladwell in The New Yorker in which a man experiencing homelessness was estimated to have cost taxpayers in the state of Nevada over a million dollars in health and social costs, including jail and hospital visits. The man was dubbed ‘million-dollar Murray.’

By offering wrap-around, holistic care around such an individual, Devereaux believes that will lead to better health and better wellbeing for the patient.

“We’re proposing integrated primary care teams, where the client is in the centre and what we are doing is bringing the specialty or the care to the patient, as opposed to what we have now, which is a referral out and then hopefully hearing back — which unfortunately sometimes doesn’t happen,” said Devereaux.

“In this new model it’s about people acting as one service — bringing in mental health and addictions care as one team,” she said. “It’s a completely different model.”

The members of what is now called the Guelph and Area Ontario Health Team have been coming together about once a week for the better part of a year to put together the successful application, said Ross Kirkconnell, executive director of the Guelph Family Health Team.

“Our work has focused initially just talking to patients and finding out what patients feel are the priorities in the system,” said Kirkconnell.

“We talked to front line clinicians, PSWs, doctors, nurses and others to find out what they see working in the system,” he said. “Then we took all of that information back and said where do we start?”

The group identified mental health and addictions, as well as palliative care, as its priorities.

“We said those are two areas that our patients, frontline providers and our data are telling us we can improve, so we started there,” said Kirkconnell.

As time goes on, the Guelph and Area Ontario Health Team will take on more areas of health care as the Local Health Integration Networks (LHINs) are phased out.

One benefit of the new program is that more of the decision making will be done at the local level, said Kirkconnell.

“What this policy does is bring decisions much closer to the front line,” he said.

Speaking during Friday’s announcement at the Clair Road Emergency Services Centre, Elliott said one criticism of the new model is that it doesn’t have a lot of rules or central command.

Elliott said the timeline to implement all of the planned local Health Teams will be a few years.

“We have to make sure that we do everything in the right step and stage to make sure patient care is not negatively affected,” said Elliott. “We want to make sure people will continue to receive their care in the same way they always have — you don’t need to do anything different as a patient.”

Walker is aware the Guelph and Area Ontario Health Team will be a pioneer for the program, and that it will likely have to work through a number of bugs while it’s being developed.

Devereaux said the experience the members of the team have in working together will help them work through those bugs.

“There are absolutely going to be times we try something and get it wrong,” said Devereaux. “The trust among the partners is going to help us to correct each other.”