Some Guelphites are recording bike thefts in progress and posting the photos and videos to Facebook
Jun 19, 2019 7:30 PM By: Kenneth Armstrong 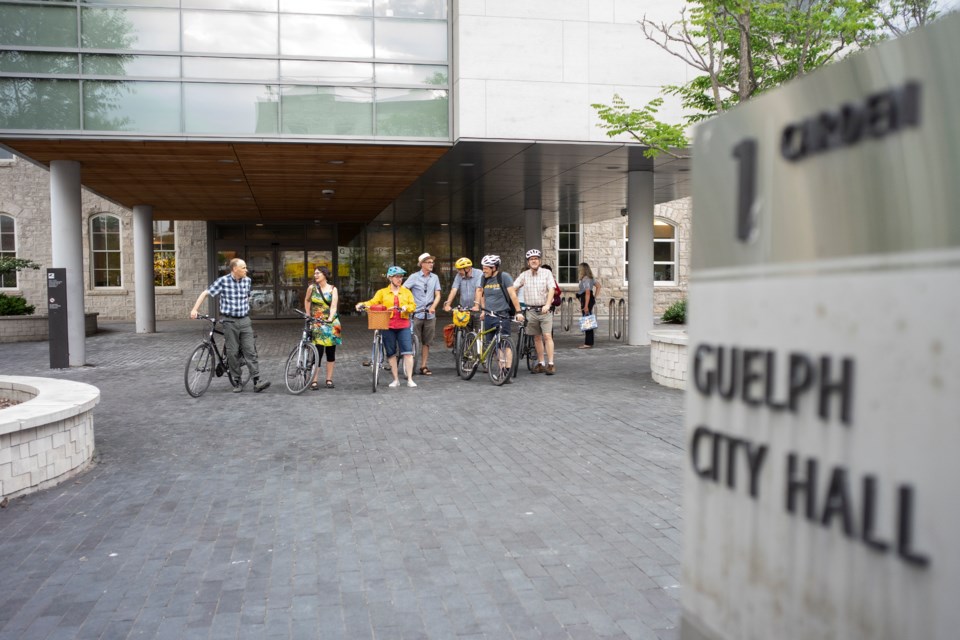 Some of the participants in Tuesday's bike theft forum at Guelph City Hall. Kenneth Armstrong/GuelphToday

On Tuesday, the City of Guelph hosted a bike theft prevention forum at city hall, intended to educate Guelphites on the best ways to protect their bicycles.

During the presentation, Const. Adam Roszell presented a series of tips to roughly 15 cyclists in the room, including what type of lock to buy, how to lock up your bike in public and how it’s equally important to keep it locked up at home.

“Between the hours of two and four in the morning , every morning, we will have calls,” said Roszell. “I am expecting one tonight when I am in.”

Roszell said he is seeing more and more reports of thefts from sheds, as well as people going through cars late at night.

“That two in the morning call where someone is going down the street trying car doors — now they have hopped a fence and are trying sheds,” he said.

“You have a really nice bike and spend the day locking it up with a nice u-bolt lock and now it’s secured in your shed with something where the key could bend in half — it doesn’t really make sense,” said Roszell. “Whatever is in your shed — it goes.”

“I don’t want to paint them with the same brush, but they are regulars,” he said of the people known to be stealing bikes in Guelph.

Roszell addressed a question about Facebook groups like Guelph Bike Theft Reports, which seek to report and return stolen bikes in the city. Some posts have gone further than simply reporting the thefts, with some users taking photos or video of thefts in action.

One participant in the forum wondered aloud if it had taken on a more vigilante role in curbing bike thefts.

“Yes, I can go on it right now and take a look and be like, ‘yep, that’s so-and-so whose picture is on there like 800 times and I know who he is,” said Roszell of the people known to police. “Citizens monitor probably a little better than we do, I know there are familiar faces I see on there.”

Roszell cautioned people to not approach people in the process of stealing bikes because someone could get hurt.

“If you go up and jump this guy and lay the boots to him because he has your bike and take your bike back — you’ve created an assault now,” said Roszell. “Who knows what they have on them, who knows what level they are going to go to to get away.

“At the end of the day, it’s a bike. For you to get hurt because who knows what this guy has or what he is — there are so many variables,” he added.

So far, the Facebook group says it has been successful in returning 21 bikes to their rightful owners. Many of the bikes featured on the site are ‘ditched,’ left in a certain place to be picked up later.

When reported to police, Roszell said the ditched bikes are usually picked up by volunteers on Sunday morning, if they are still there. Because of prioritization of calls and limited space in a police cruiser, Roszell said it’s not likely an officer can pick up a ditched bike right away when it is reported.

He recommended people report suspected stolen bikes through the department’s non-emergency line, as opposed to calling 911.

The department does have a so-called bait bike, said Roszell, which is sometimes used to try and catch bike thieves.

The most crucial takeaway from the forum was the importance of recording the serial number on every bike you own. They are most often found the bottom of the bike directly under where the pedals connect to the frame.

“You have to take down your serial numbers, because then I can be like, ‘yep, that bike is 100 per cent yours and now I can arrest him for theft and possession of stolen property and get you your bike back,’” said Roszell.

If a bike’s serial number is registered through the 529 Garage program, a bike registering service that Guelph Police has partnered with, police are able to return a stolen bike sometimes even before the owner knows it’s missing, said Roszell.

“You haven’t even reported it missing yet, but I can run it and it will come back ‘Joe Smith,’” said Roszell.

Bike theft is a major problem in Guelph, said Yvette Tendick, president of Guelph Coalition for Active Transportation. She was one of the attendees at Tuesday’s forum.

“Sometimes people decide not to ride their bike because they are afraid of it getting stolen,” she said. “There has to be tools for people to use to control not getting their bike stolen.”

Tendick would particularly like to see more Guelphites signing up for Garage 529 to register their serial numbers and make them accessible to police.

“I know that it greatly reduced bike theft in Vancouver,” she said of the service.

“The biggest thing is, people are putting bike locks on — they just aren’t the right type," he said. "These guys are walking around with side-cutters and bolt cutters and if you are just locking it up with a wet piece of spaghetti, it’s gone.”

The u-bolt should be passed through the wheel and the frame of the bike to a secure bike locking station, when available, not to a tree or something flimsy. Riders can choose to remove their front wheel and lock it also or take it with them.

Roszell cautioned against locking only the front wheel, because that often ends in the theft of the rest of the bike.

If parking in a bike rack with other bikes, Roszell recommends putting your bike in the centre, not on the ends, where it is more visible.

Roszell also recommends locking your bike in an area where a lot of people would see it, should someone choose to steal it.

“If someone wants your bike, they are going to take your bike,” said Roszell. “But the citizens of Guelph are pretty good and if they see something going on, we are getting a call for it.”