The final instalment of a five-part series, we look at the unique challenges facing Syrian women in their new life
0
Dec 20, 2019 12:00 PM By: Anam Khan 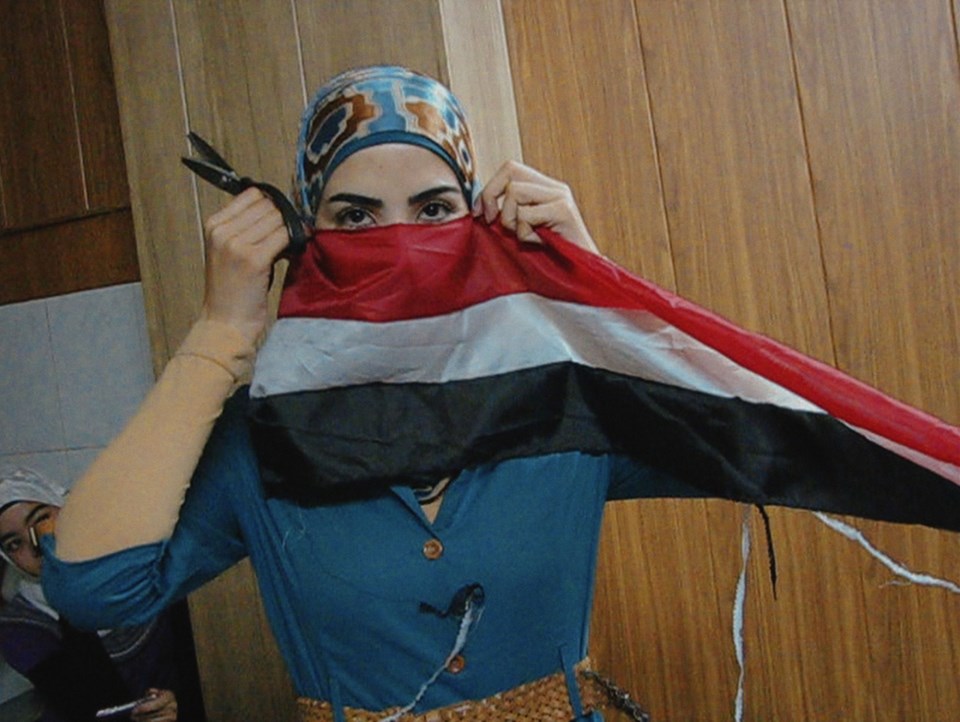 A Syrian woman covers her face with her country's flag in order to protest the oppressive Assad regime in the documentary The War Show.

“We need to tell them that here in Canada, everybody has rights and you speak up for yourself, and advocate for yourself." — Hoda Ghonim.

For Syrian refugees, there is a stark difference between east and west. The challenges women face are different than those faced by men.

Coming from a patriarchal society, Ghonim says it is important to take women out of their comfort zone and connect them to one another.

“We need to tell them that here in Canada, everybody has rights and you speak up for yourself, and advocate for yourself,” says Ghonim.

“I started with the Syrian influx. The women told us, ‘please tell this information to the men’. So we have to tell the information to both sides so that everyone knows that women have rights and have a voice.”

Ghonim says when she started the program in 2016, she noticed that domestic violence is a clear issue among the Syrian refugees when they first arrived in Canada.

Sly Castaldi, executive director of  Guelph-Wellington Women in Crisis— community organization with multiple programs that provide services to women and their children fleeing abuse and sexual violence in the Guelph and Wellington County— says the organization has not seen an increase of domestic violence in the Syrian refugee population.

According to the United Nations High Commissioner for Refugees, female Syrian refugees have reported that domestic violence has increased within their populations since the start of the war in 2011 because of the lengthened conflict, displacement, poor living conditions and the shifting of gender roles.

“They have a lot of complexity in their home country and most of them did not come from Syria directly. They came from Turkey, they came from Egypt. They went to maybe two to three countries until they came here,” says Ghonim alluding to the fact that it is ultimately frustration that plays a role in domestic violence.

She says when newcomers come to Canada, they go through a honeymoon phase where they have high expectations that are left unmet because of the cultural differences.

“The women, when they come here, they think the culture is the same and that they have to make their decisions with their husband. It’s a family a decision,” says Ghonim.

“Finally, it’s the men that make the decisions. Because most of the women are not working, most are not educated properly—some are highly educated.”

Meezan School of Guelph teacher Azza Hassan, who came to Guelph as a Syrian refugee in 2016 says sometimes it is just the woman's choice to lead a more traditional lifestyle.

“Some of them like the role of being at home, cooking, and having children. This is what she knows. This is how she was raised,” says Hassan.

“I think the new generation in Canada, when they see the woman working, they won’t have the same way of thinking,” says Hassan adding that for a lot of women, raising kids in Canada while not being able to speak the language fluently compels them to stay at home.

Hassan says she faced some struggles herself despite being educated and fluent in English prior to moving to Canada.

She left Syria in 2013 for Turkey then came to Canada in 2016. She says once she had children life became about supporting them and building a future for them.

And for her, Canada exceeded her expectations.

“I found Canadian adults helping me in everything. starting from the smallest details. I went to a house full of furniture with toys on the bed for my daughters. Everything was so well organized. I was like what is this? Is this heaven?” says Hassan.

“You wouldn’t imagine that people take care of the smallest details.”

She says because women have more responsibilities in her culture, she couldn’t go back to university.

“I will say the first struggle was 'I’m old and I’m doing things that you do in your 20s such as worrying about your career,'” says Hassan who was 41 when she came to Canada.

She says the title of being a Syrian refugee sometimes puts her in a stereotypical box.

“As a woman wearing a hijab, sometimes people look at you and judge you and think that the hijab is a man’s choice, he’s controlling you and you’re the woman who is being controlled,” says Hassan who says it is entirely her choice to wear a hijab.

“Immediately the judgement comes with what you wear. That you are a weak woman and you don’t have your own opinion.”

She recalls a time when she went to the doctor for her migraines.

“The moment she knew I’m Syrian, she decided that I have depression and she started giving me anti-depressants,” says Hassan adding that when she changed doctors she learned the root of the problem was a vitamin deficiency.

Hassan says when she first arrived, she didn’t know what to expect. It was through the help of the Muslim Society of Guelph and Superfriends where she was able to navigate through all the necessary adjustments she needs to make in her new life.

She says representatives from the Muslim Society of Guelph would come to her home with a checklist for important responsibilities such as renewing a health card or finding a job.

“When they offered me help to find my first job, I was like yes I will start doing that because I wanted to see what real Canadian society feels like,” says Hassan.

She says the more Canadians she met, the more she realized how open-minded and kind they are.

She recalls a particular incident that took place on a bus when she first came to Canada—an incident that moved her to tears and one that she thinks about to this day.

"A lady was running after me and my children was like mama this lady wants to talk to you. I looked at her and she stopped me and said ‘you are welcome in Canada. Have a wonderful peaceful life, raise your children well, we love you’. And she hugged me and she left," says Hassan.

“It affected me so much because some people say that Canadians don’t like Syrian refugees to come but this lady showed me that she’s welcoming me even though I am a complete stranger.”

Guelph's Syrian Experience: Conflict leaves families scattered around the world
Dec 19, 2019 12:00 PM
Comments
We welcome your feedback and encourage you to share your thoughts on this story. We ask that you be respectful of others and their points of view, refrain from personal attacks and stay on topic. To learn about our commenting policies and how we moderate, please read our Community Guidelines.