Habitat for Humanity asks city to further delay its payment of $437,000 in development charges

Development charges are usually due at the beginning of a project. Habitat for Humanity is asking to pay the charge once the project is complete and its primary lender has been paid
0
Nov 15, 2018 5:15 PM By: Kenneth Armstrong 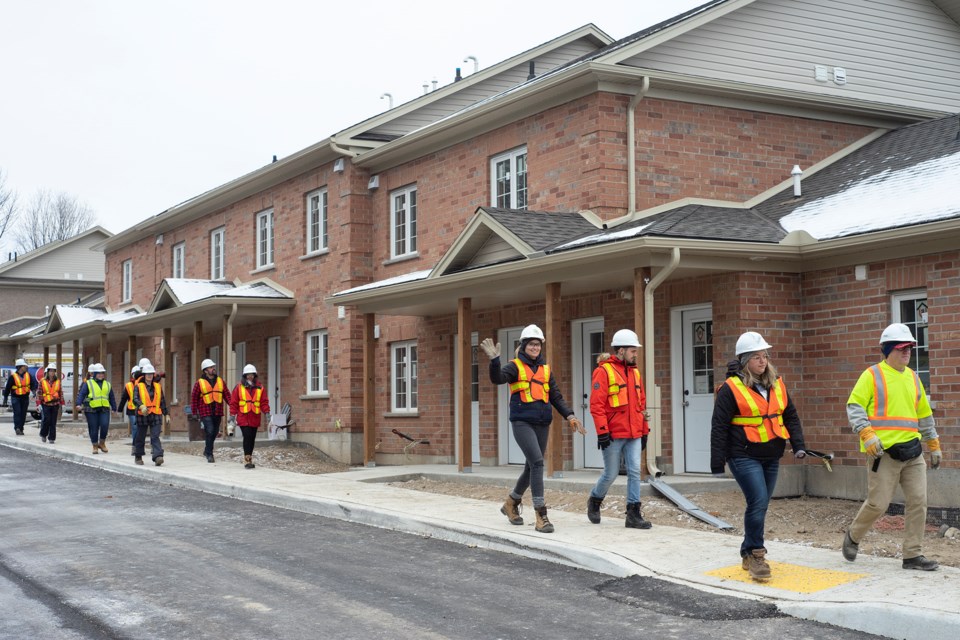 Phases 1 and 2 of Cityview Village are nearing completion. Habitat for Humanity is asking the city to further delay payment of development charges for the project. Kenneth Armstrong/GuelphToday

As construction of the initial phases of Cityview Village are coming to a close, Guelph City Council will decide on Monday if it will allow Habitat for Humanity to defer almost half a million dollars in development charges until the entire project is paid for.

Cityview Village is a three-phase townhouse project spearheaded by Habitat for Humanity Wellington Dufferin Guelph that will eventually make 28 units available through the non-profit organization and its partners.

Keys for some of the first units in Phases 1 and 2 will be handed over to their new owners as early as next month, said Steve Howard, CEO of Habitat for Humanity Wellington Dufferin Guelph.

Habitat for Humanity is now asking for the city to enter into a Subordination and Postponement Agreement, allowing those development charges to be repaid once the entire project is complete and its primary lender has been repaid.

“We have signed a promissory note to the city,” said Howard. “But to complete the project we are taking out a construction loan with Van City Community Investment Bank.”

The new $3.46 million construction loan will pay off the small mortgage Habitat took on to begin the project and will allow funds to be available for the project to be completed.

“This construction financing we are putting in is actually to recover some of the costs we have already put into the project and to allow us to finish the first two phases,” said Howard.

Phase 1 includes 12 units, while Phase 2 will have eight units.

In spring of 2019, Habitat for Humanity will begin construction of the third phase, which will include an additional eight units.

“While we use our fundraising and ReStore to get the buildings in place, then we put the mortgages on with the families that come in, we leverage against the stem of income that will come from that and then we take those funds and plow them into the next project — that’s the Habitat model and it’s quite a beautiful one,” said Howard.

The city of Guelph has identified a priority to increase the amount of affordable housing supply in the city, said Trevor Lee, the city’s deputy CAO overseeing Corporate Services.

City staff are recommending that council approve that the development charges would be paid at the end of the repayment strategy to Habitat for Humanity’s primary lender.

In most cases, development charges are due at the time a building permit is issued — not at the completion of the project.

The staff recommendation weighs the needs of the community and the city’s affordable housing strategy against the $437,420 bill that Habitat for Humanity will eventually have to pay.

“I think many (councillors) will have the affordable housing strategy in their minds when they are making the decision,” said Lee.

Entering into a Subordination and Postponement Agreement with Habitat for Humanity will expose the city to increased risk, said a report to council. Any amount not collected from Habitat for Humanity would be transferred from the city’s $973,500 affordable housing reserve to compensate for the lost revenue.

Howard said in the past the city has supported previous builds by forgiving some or all of the development charge.

“Because there were 28 homes in this project that was just too big a chunk for them commit to, which seems fair and reasonable to me,” said Howard. “It would be a pretty significant hit for the city to take that loss, so I think this was their accommodation.”

He added, “by the time we we are due to pay these funds we are hoping there will be something in place to help defray the repayment, but we’re not counting on it.”