Here's where each councillor sits on the new $62 million library

Council members share their thoughts heading into next week's decision
Oct 1, 2020 8:00 AM By: Richard Vivian 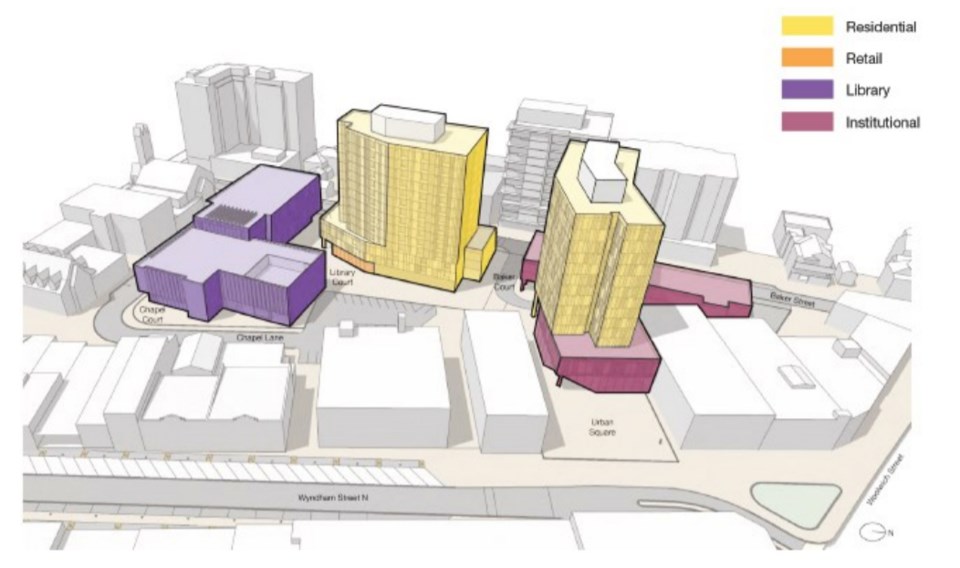 If city council were to vote today on the proposed $62 million new central library project as-is, the decision could go either way.

Polled by GuelphToday regarding their support for the project – part of the Baker District redevelopment – six members of council said they’re onboard while four said they’d vote against it and three are undecided. The latter three each expressed enthusiasm for the concept but have concerns about the cost and the associated tax increase (0.39 per cent per cent over a 20-year period starting in 2021).

In favour of the project are councillors James Gordon, Phil Allt, Leanne Caron, June Hofland and Cathy Downer, with Mike Salisbury leaning heavily in that direction as well.

Here’s what they had to say:

Allt: “(This proposal) makes the library what I think it needs to be, which is an icon of the values that Guelph wishes to promote – culture, heritage, literacy, education and downtown vitality … This can be something that will kick start downtown revitalization.”

Caron: “This project has been on the books for a decade. The needs assessment was firmly established, the budget, the square footage. This has been through every study, every analysis and council already has a motion to move forward on this. If we delay it, if we shrink it, if we try to prevent the shovel from going into the ground, we are only going to increase our costs over time.”

Downer: “This has been like a 25-year process to get to this. It has jumped through more hoops than any other project … The price has gone up every time we take votes on this. It’s gone from originally $10 million many years ago to this price.”

Gordon: “As a library advocate, dating back a generation, the work that’s gone in … to determine the actual lowest square footage that we would be able to meet our future growth needs, our growth expectations … With any less, it is not giving us the library that meets our needs. It would be redundant the minute it was completed if it was smaller.”

Hofland: “There’s been reams of studies, reams of business plans and drawings. They’ve so accumulated over many years. We’ve done functional plans, business plans. I think it’s time to get the shovel in the ground and build our library.”

Salisbury: “I don’t think it would be helpful to pull the rug out from all the future benefit that we would get. It’s not just the library. The library is the leading edge to this much larger development in the Baker Street redevelopment project. You pull the library, you’ve pulled the whole thing. That would have tremendous negative repercussions for our downtown and our community going forward.”

On the flip side of that coin are councillors Dan Gibson, Mark MacKinnon and Bob Bell, as well as Mayor Cam Guthrie.

Here are their thoughts on the subject:

Guthrie: “Unless absolutely new information comes to me by next week when we have to be making this decision, I will not be supporting this amount of money for a new library that saddles the taxpayers with extra tax levies for 20 years … and will increase operating costs.”

Bell: “I believe in moving the library to upper Wyndham Street. It should be a standalone structure and it should be 50,000 to 60,000 square feet. I’ve always supported that and I will continue to … I’ve been very clear all along what I will and won’t support.”

Gibson: “I didn’t support it the first time it came to council, at $67 million and I don’t support it now, especially with the fact there are no federal and provincial funds coming to support that project. I don’t support putting that extra burden on the citizens of Guelph through a tax levy.”

MacKinnon: “I have some strong reservations of the new location that’s been chosen. Having been in Baker Street quite a lot, the interior of the parking lot is not an attractive location for a really important and large building for the city … I don’t think this is the right decision.”

In the undecided camp are councillors Christine Billings, Rodrigo Goller and Dominique O’Rourke, whose votes will determine the outcome next week.

Here's what they had to say:

Billings: “I’d have to listen to the delegations. I still have some additional questions for staff, given I have serious concerns regarding the overall budget impact. I’ve got a number of issues. There’s finances. There’s parking.”

Goller: “I’m really conflicted about this … I like the vision. I think it’s great. I am concerned about the tax levy we would need … in the context of the other tax increases that will be coming down the road.”

O’Rourke: “I’m really concerned about the economic climate. I’m concerned about people’s rising assessment on their home and their ability to pay increasing taxes. And I’m concerned about what’s coming down the pike in terms of more costs for the city. At the same time, I think it’s an opportunity for city-building, so I really want to see us build it – all of Baker (District), including the library. I’d really love it if we could come in at a more modest square footage.”

A revised layout for the Baker District project – redevelopment of the Baker Street parking lot and nearby properties – will be discussed during city council’s committee of the whole meeting on Monday afternoon. Council will consider approval of the changes on Wednesday evening.

The plan also includes four public spaces connected by a series of pedestrian paths allowing flow from north to south and Baker Street to Wyndham Street North through a variety of routes. Public spaces are to include tiered plantings and seating opportunities among the landscaped design.

The revised Baker District project layout will be presented during city council’s committee of the whole meeting on Monday. Council will consider approval of the changes on Wednesday.

While Salisbury is supportive of the project, he said he’ll be entering those meetings with an open mind – his vote is not written in stone.

“Going into it, I don’t see any reason why we would vote ‘no’ on that right now. I think that would really be detrimental,” he said, acknowledging delegates have changed his mind on matters in the past. “I think it’s important not to go into anything close-minded.”

The reason for the two-day turnaround, Mayor Cam Guthrie previously told GuelphToday, is so that city staff can allocate necessary spending in their upcoming draft 2021 budgets, as well as to provide a level of certainty to Windmill Development Group.

Included in the motion to council on Wednesday is approval to spend $16.6 million in 2021 on site servicing, environmental/archeological remediation and the outdoor public space for the Baker District.

The City of Guelph applied for a joint provincial and federal funding stream up to $36.6 million toward the then-estimated $67 million price tag for the new library, but was not selected.