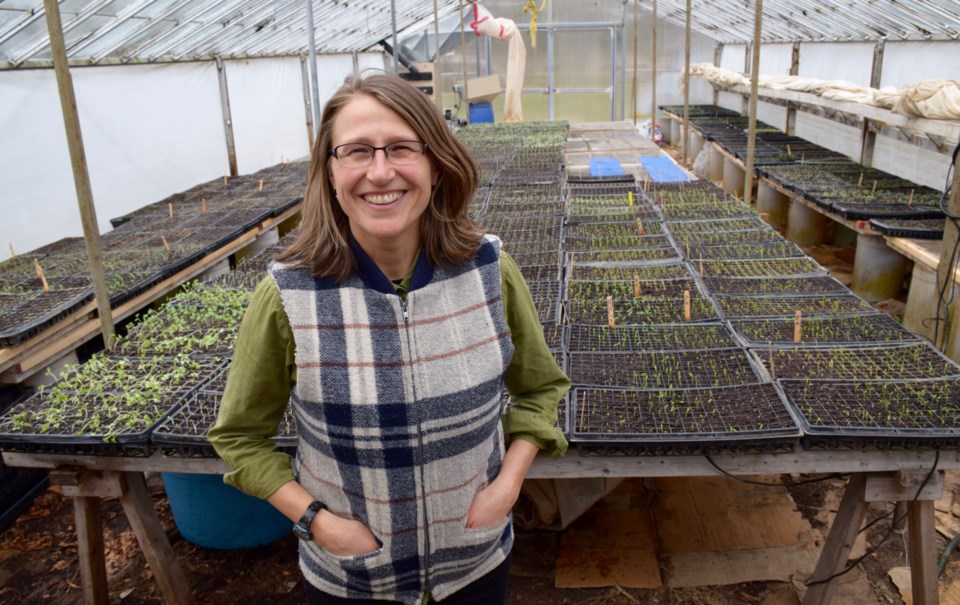 Ignatius Farm at the Ignatius Jesuit Centre on the northern outskirts of Guelph wants to extend its organic community shared agriculture (CSA) bounty more widely in the city.

Seedlings are beginning to sprout in the farm’s greenhouse and a small team of farmers are putting the finishing touches on planning for the growing season.

Director Heather Lekx wants to ensure that more people in Guelph have an opportunity to enjoy the ultra-fresh produce grown at Ignatius.

She is looking to establish two new distributions sites in the south end of Guelph this year, and more next year - in an area of the city that currently may not have access to locally grown organic vegetables.

Brock Road Nursery on Gordon Street on the southern end of the city is currently a drop-off site but Lekx is now exploring options for south end CSA drop-off sites.

April is the optimal time to sign up. Registration is now open for CSA shares and for community garden plots of all sizes. For those who want to garden in a farming environment, Ignatius Farm offers plots from 100 to over 1,000 square feet. Organic agricultural practices are strictly observed.

The CSA is an opportunity for community members to enjoy the fresh, organic harvest right from the farm, said Lekx.

“One of things we did last year was a test pilot of a south end drop,” Lekx said, speaking of Brock Road Nursery. She added that Ignatius Farm is also testing the waters on a farmer’s market for the area.

As many as 200 shares in the CSA are sold each year. And while those who participate in the CSA “absolutely love it,” many of those who join have a difficult time getting to the farm every week. And many more would likely sign up if there were more drop-off sites.

“People are getting accustomed to the idea that they can access organic food, but they’re not necessarily experiencing really great, flavourful organic food if it has been sitting in a grocery store, versus when it’s picked that morning and they get it that afternoon,” she said.

A number of Guelph-area CSAs have sprung up, mostly serving downtown neighbourhoods where there is a high concentration of CSA devotees. Many of those growing the food and running the CSAs have been trained at Ignatius.

Ignatius Farm brings on five or six interns each year through the Principles and Practices of Organic Agriculture Program. There are two full-time farmers, and an average of eight seasonal workers.

“There are lots of people who aren’t in those immediate downtown areas who would appreciate having a south end drop,” she said. “We’re close enough to the city that we could actually have multiple drop points in the city.”

She is looking for community organizations, work places, schools or other community gather places, where people would like to have a closer connection to a local organic farm.

“We can then bring our CSA shares to them,” she added. “And we could then invite those communities to Ignatius to participate in farm activities.”

She added that Ignatius Farm hosts Open Farm Days in August, one of a number of ways for people to “get to know and engage in a farm ecosystem.” Ignatius Jesuit Centre is supported by three key pillars, she added – ecological spirituality, ecological farming, and ecological restoration.

“All of the work that we do with the farm is about giving people the opportunity to experience that farm ecosystem and be a part of it,” she said. “It’s a very interesting blend of a very human ecosystem that is working with the natural world.”

The farm dedicates three acres to community gardens. There are about 175 registrations each year in various sizes, most of those annual plots. Ignatius farmers prepare the ground, cultivating the land, marking out plots, and setting up water barrels and water lines. There are also communal gardening tools on site. Online and paper registration is available.

“The thing we hear the most from folks about the garden plots is they just love our soil,” Lekx said. “And I think people also appreciate having their garden in an agricultural landscape. People appreciate the vista. And there gets to be really nice camaraderie.”