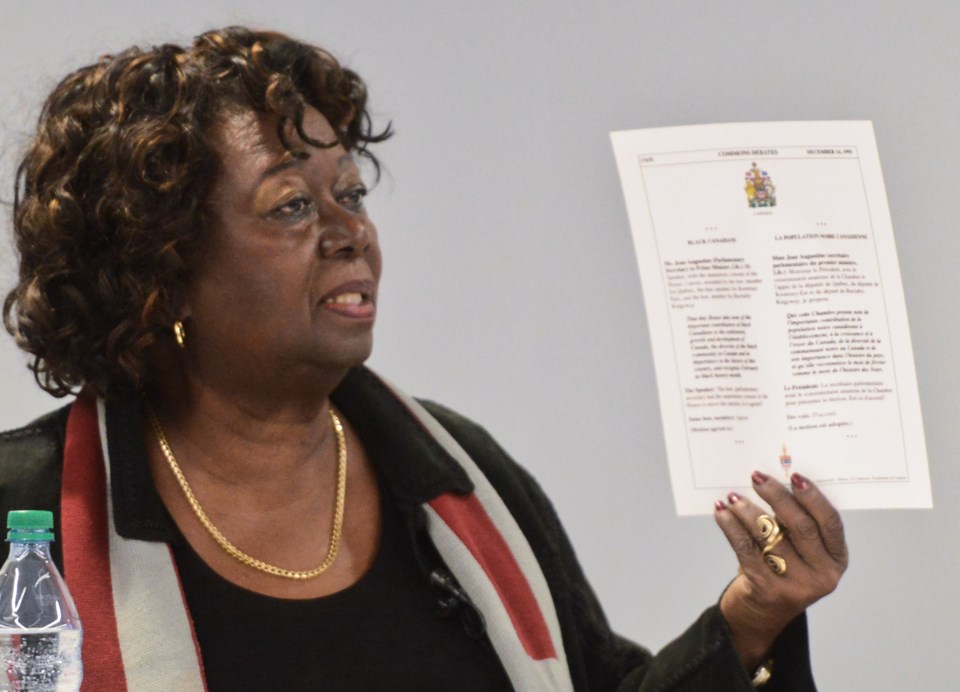 Jean Augustine, speaking at the University of Guelph Tuesday, holds a copy of the House of Commons debate page from the day she tabled a motion to have February declared Black History Month in 1997. Tony Saxon/GuelphToday

'When are we going to have White History Month?'

That was one of the sad responses Jean Augustine says she got from a fellow Member of Parliament in 1995 when she was lobbying to have February declared Black History Month.

'So you want February. So who is going to come for March?' said someone else to her as she made the rounds in trying to win over all the members of the House of Commons.

"I wanted a 'yes' (vote) from them so I did not allow the provocation to send me over," Augustine said.

After tabling her motion in the House and delivering an impassioned speech that left little room for debate, February was officially declared Black History Month in Canada.

On Tuesday Augustine told her story of how Black History Month came to be at the University of Guelph.

"This is a story that is a very, very long one," Augustine told those gathered at the McLaughlin Library.

"To talk about why Black History Month? Why I felt it was important to put forward that motion, I have to go back to the fact that I came to Canada in 1960," she said. "Canada, and Toronto, was a different place."

No Charter of Rights and Freedoms, no Human Rights Code, no Landlord and Tenant Act. No police talking to communities. No SIU. No school boards reaching out to parents and community.

"I could go on and on," she said. "So all the talk by Pierre Elliott Trudeau and others, about this 'just society,' how can we make it just and fair for all of us in this society?"

Augustine came to Canada from Grenada in 1960 under a program that allowed immigrants into the country who committed to working as domestic help for one year.

She went on to get her Masters and both taught and was an administrator in the Toronto school system. More importantly she became very active in her community in charitable and volunteer causes.

That included championing for the rights of minorities.

When the Liberal government was looking for women to run in the 1993 federal election, party leader Jean Chretien recruited Augustine to be their candidate in her riding of Etobicoke-Lakeshore.

She won the riding, becoming the first African-Canadian woman to ever sit in parliament.

Augustine would serve four consecutive terms before retiring from politics in 2006.

When it came time to table the motion and the Speaker of the House asked if any members objected, Augustine said she stayed standing as members were asked one by one if they supported the motion.

"I wanted to see those people that provoked me. In the Carribean you discipline with your eyes," she said.

"That is how we got Black History Month."