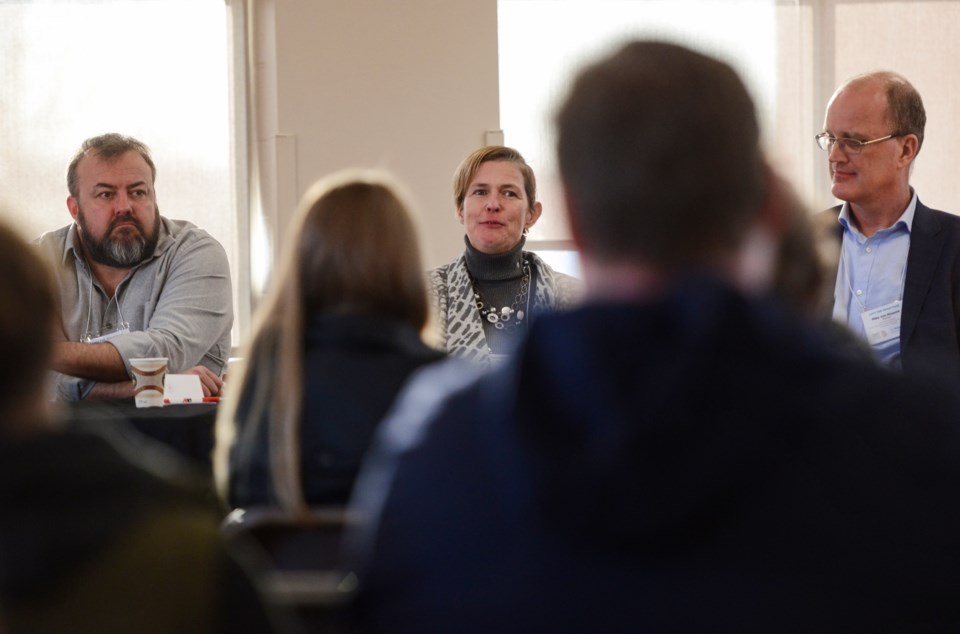 Learn how to cook.

A simple but essential element to advancing food security, increasing the quality of food you eat and reducing food waste.

That was one of the key points stressed by a panel of food experts Tuesday night at the Guelph Y.

The Let’s Talk About Food event drew about 75 people to hear more from those who make their living making, eating, selling and studying food.

The audience heard that one in six families in our area are food insecure and that one-third of our food is thrown away.

“It’s not hard to eat healthy,” he said.

“There are so many good things to eat. The problem is we don’t know how to prepare them.”

That leads to people eating more bad food, too much food and not being inclined to care about shopping properly for food.

“We’ve built waste into the equation,” he said.

Von Massow said we should be teaching young people the basics of cooking in school.

Now she wonders if people are “just eating and consuming” for the sake of it.

“People buy too much food and people make too much food,” said Crump, one of several middle aged panelists who remembered a time where food was scarce in their homes.

“We live in this world where we have this concept that it’s an unlimited bounty of food and it’s always in season,” Crump said.

Crump said that convenience “trumps us.”

“If taste could trump convenience I think we’d all be in a better position,” Crump said.

Robinson said that planning is the key to eating better.

Planning a week of meals in advance and shopping more than once a week so you only purchase what’s needed and don’t end up with wasting so much food, Robinson said.

‘It begins with shopping. Not just buying things that are on sale or from Costco,” she said. “Shop two or three times a week.”

The subject of “best before” dates on food got von Massow animated.

“The most poorly understood information on food packing today is ‘best before’ dates,” von Massow said.

“‘Best before’ dates have nothing to do with the safety of the food,” he said, adding that it only shows the date that the food will still be at its absolute peak.

“It generates a tonne of waste,” he said of those dates.

Tuesday’s event was put on in conjunction with the City of Guelph’s Our Food Future Smart City competition entry, a federal government competition that has Guelph as a finalist to win $10 million for its plan to create a circular food economy, reduce food insecurity and food waste