Guelph is not known as a fashion centre, but the city spawned a woman who made her mark on fashion history
Apr 30, 2016 6:00 PM By: Joanne Shuttleworth 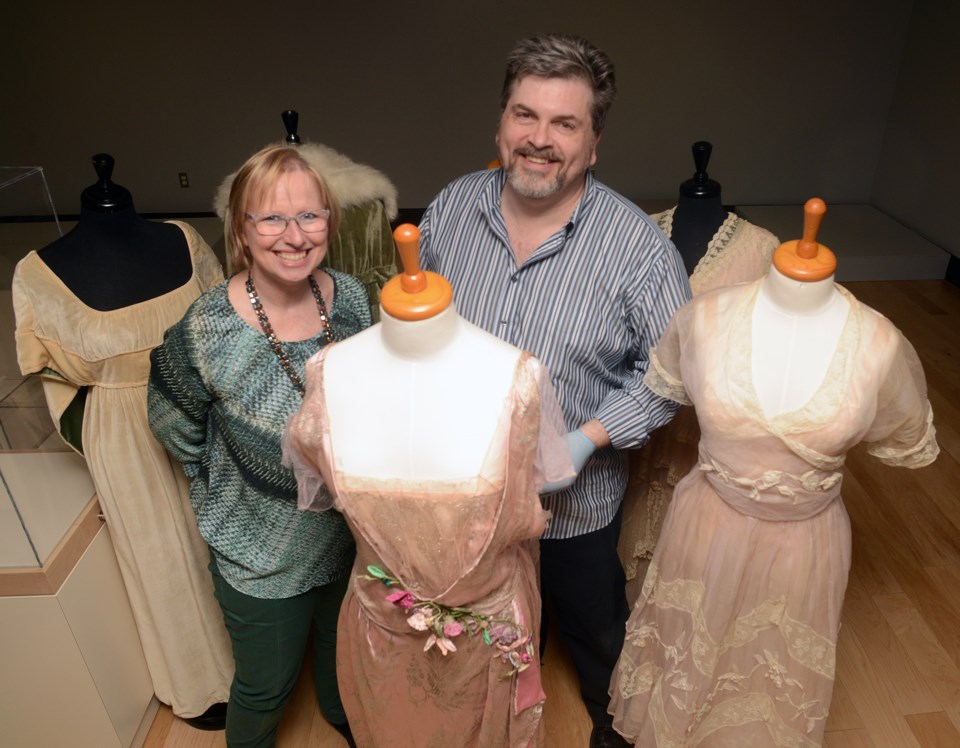 Bev Dietrich, curator at the Guelph Civic Museum, and Jonathan Walford of the Fashion Museum in Cambridge pose with some of the dresses. Tony Saxon/GuelphToday.com

Guelph is not known as a fashion centre, but the city spawned a woman who made her mark on fashion history.

And the Guelph Civic Museum will highlight the story of Lady Duff Gordon – “the world’s most famous couturiere of her day” according to the museum -- in its blockbuster exhibit, Lucile: Fashion. Titanic. Scandal.

Lucy Sutherland lived in Guelph as a child and later moved around the world finally landing in England. She married, had a child, and ended up fleeing her abusive husband. This forced her to work and she took to sewing, a path that led her to dressmaking and fashion design.

She became a sought-after designer, an entrepreneur with her Lucile clothing line and stores in major fashion centres around the world, and raised to the ranks of socialite when she married Sir Cosmo Duff-Gordon. The marriage also raised eyebrows though, as Lucy was a divorcee and her sister Elinor Glyn wrote racy romance novels.

In 1900, this was the stuff of scandal, said Bev Dietrich, curator at the Guelph Civic Museum.

“It’s quite something that these two sisters grew up in Guelph and left a legacy on the world,” Dietrich said.

Lady Duff-Gordon’s business accomplishments are largely overshadowed by the couple’s story on the Titanic. The two escaped on Life Boat number 1 with only 12 passengers on a boat that could hold 40. After the survivors made land, Sir Cosmo was accused of bribing the crew to allow him passage after a women-and-children-only order was issued. While they were later exonerated of any wrong-doing, Sir Cosmo could not shake the cloud of scandal.

“It improved her business but ruined him,” Dietrich said.

While these aspects of Lucile’s life will be on display during the exhibit, including John Willard’s tribute quilt to lives lost in the Titanic and other Titanic artifacts, the bulk of the exhibit will be about Lucile’s dresses.

“Her formal dresses were a nightmare to put on,” he said. “This would not be the dress you put on if there’s a fire.”

Lucile also changed the industry by launching the first fashion shows and marketing her brand through fashion journalism.

About a dozen dresses will anchor the exhibit that opens May 7 and runs until Nov. 13. In the fall there will be a series of guest lectures to explain components of exhibit.