Mayor Cam Guthrie says the City of Guelph had already budgeted for much of the project in its 10-year capital plan
Jan 18, 2020 7:00 AM By: Kenneth Armstrong 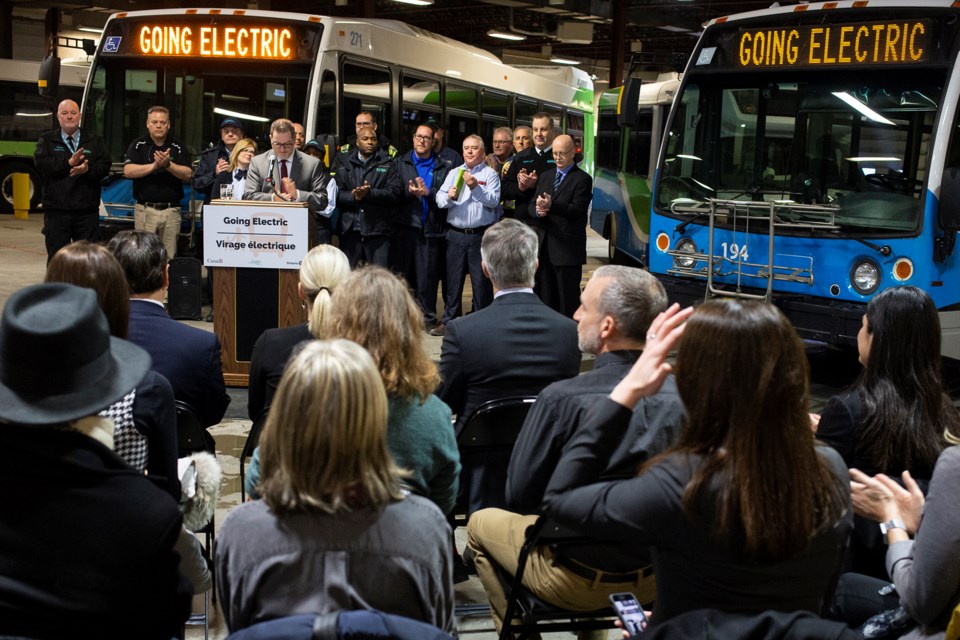 A funding announcement made Thursday will result in the electrification of much of the Guelph Transit fleet of buses. Kenneth Armstrong/GuelphToday file photo

Guelph’s mayor has been dealing with the sticker shock some residents have since the three levels of government announced a plan to replace much of the City of Guelph’s diesel bus fleet with electric buses on Thursday.

The plan, which also includes on-route charging stations and a new 200-bus storage facility, will cost the city just over $100 million, with the province kicking in $35 million and the federal government covering $41 million.

Mayor Cam Guthrie had been responding to some tough questions from many Guelphites on Twitter by the time GuelphToday spoke to him on Friday afternoon.

“By default, I think people looked at the buses and they go, ‘$179 million in buses?’” said Guthrie.

Many were concerned there would be a dramatic jump in their property taxes to pay for the change.

“The city’s contribution of $104 million does not rely entirely on tax-supported funds,” said Guthrie. “That’s what I have been saying online over the last 24 hours to some people.”

Much of the overall $179 million price tag for the project is something the City of Guelph had already accounted for in its 10-year capital plan.

“The entirety of this funding is not something that is a surprise that is being added to the existing capital plans the city already has,” said Guthrie. “This has been on the radar and accommodated for in our capital plans — it’s just other levels of government are now lessening the burden of property tax supporting those projects over the 10-year capital plan.”

Steve Petric, local transit activist and co-founder of Transit Action Alliance of Guelph (TAAG), said his group is excited to see the new electric buses on the road in the city.

“All across North America they have been buying these buses and people love them,” said Petric. “They are quiet, they work — drivers love them. They help us without greenhouse (gas) reduction goals.”

“We think it’s a good investment for the future,” said Petric. “It’s not like they are saying you have to pay more taxes for this — it’s been budgeted for.”

He hopes more buses will eventually lead to an increased level of service in the rapidly-growing city and address some of the service gaps in some areas of Guelph where people still can’t catch a bus.

“It’s nice that we are getting more buses, but what’s the growth strategy? We don’t know where they are putting these buses?” said Petric. “We see where the gaps are, we would just like to see some kind of plan to address it.”

In total, three projects were announced Thursday, with the first including the purchase of 35 long-range electric battery buses and the installation of on-route charging stations. During the announcement, Mayor Cam Guthrie said the procurement process for those first 35 buses will begin almost immediately.

The second project will include the purchase of 30 more electric buses in the future.

Lastly, a new bus storage facility in Guelph that could store up to 200 vehicles and will include charging stations for the buses will be completed. There is only room at the current Guelph Transit Garage on Watson Road South to add one charging station, city staff told council late last year when the electrification of the fleet was brought up at Guelph City Hall.

Guthrie said the new storage facility would likely be part of a proposed operational hub the city plans to build in the near future.

It was good to see all three levels of government working together around a major climate change initiative like switching much of the bus fleet over to electric, said Guthrie.

“Not only to reduce greenhouse gas emissions but, to provide a cleaner transportation option in a fast-growing city like Guelph — that also touches on lowering our operating costs once it’s fully implemented — those different things all touch all levels of government and all different party ideologies,” said Guthrie. “If you have a fiscal bend to projects, this one is an operating efficiency. If you have a need for projects that are helping to address climate change — this same project does that.”