Treat Accessibility began in 2017 in Toronto after Rich Padulo realized the boy living across the street would be unable to get candy because his front steps would be a barrier for the boy’s wheelchair
Oct 25, 2019 7:00 AM By: Kenneth Armstrong 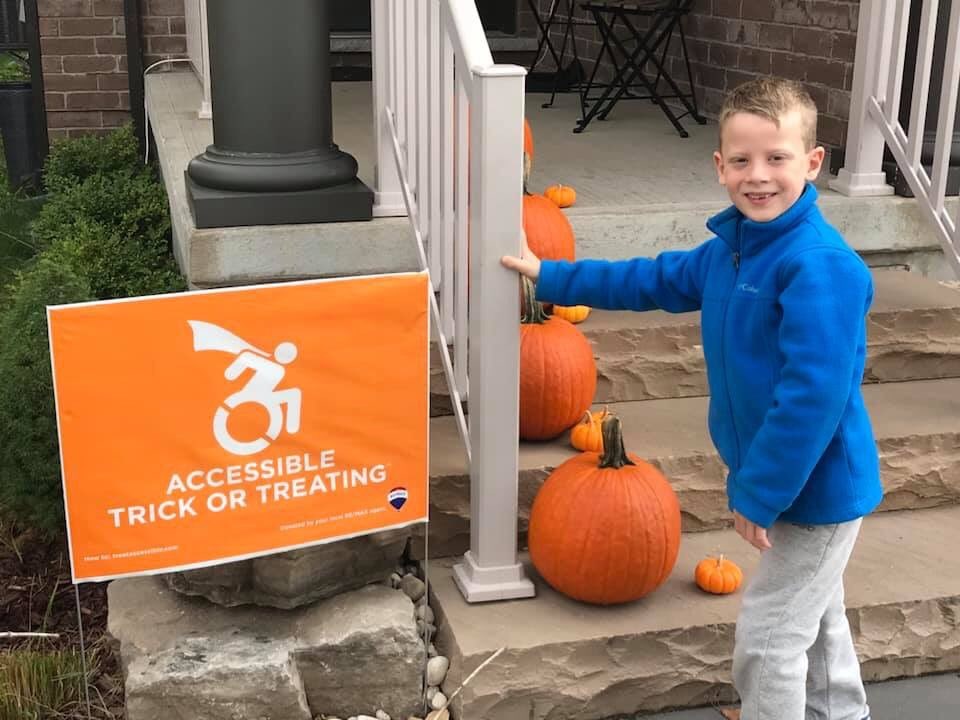 Bentley Mitchell poses next to a 'Treat Accessibility' sign, which signifies that kids living with a disability can trick-or-treat there. The signs are available at some Home Depot locations. Twitter photo

Placing a ‘Treat Accessibility’ sign outside your house this Halloween will allow children with physical disabilities to enjoy a little more Halloween this year, says the father of a local boy living with cerebral palsy.

When Bentley Mitchell was born over seven years ago, doctors believed he may never be able to walk, but the community raised enough funds to send the boy to the United States for surgery, said his father, Chad Mitchell.

Halloween is one of Bentley’s favourite time of the year, but Chad said his son can get tired going up and down the front steps of the homes giving out candy.

“You see the other kids running from door to door — he just doesn’t have that endurance — so any steps you can save him just makes his night last a little bit longer and more enjoyable,” said Chad.

Treat Accessibility began in 2017 outside the home of Rich Padulo in Toronto after he realized the boy who lives across the street would be unable to get candy because his front steps would be a barrier for the boy’s wheelchair.

Padulo made a sign and accessibility changes to allow children with physical disabilities to trick-or-treat like the other children.

People who want to participate in the program can make small changes to accommodate those children, like giving out candy from the garage or front step or building a simple ramp.

This year, an estimated 20,000 signs will be distributed across Canada.

Chad heard about the program earlier this year and went to the local Home Depot to get a sign for his own family’s home.

“Now it just adds more visibility and awareness,” he said of the program.

Years after his surgery, Bentley now walks almost a kilometre to and from school every day as he continues to build up his endurance.

Small things for most people, like dressing yourself or putting on your shoes, would have been a lofty goal for Bentley before the surgery.

“My wife and I often say the upside of the surgery was to get him to walk on his own — which he’s able to do now — but it’s all of the other things he has gained to get independence in his life,” said Chad.

Bentley has gone on to play baseball, sledge hockey and karate.

“He has far exceeded expectations, that’s for sure,” said Chad.

The Treat Accessibility signs are sponsored by RE/MAX and available at many Home Depot stores across Canada.

“I am very grateful for the support of both RE/MAX and The Home Depot Canada and look forward to having other corporate partners join the movement,” said Padulo in a press release. “Making your home accessible for trick-or-treat is simple and fun for you, your family and for everybody participating in Halloween.”