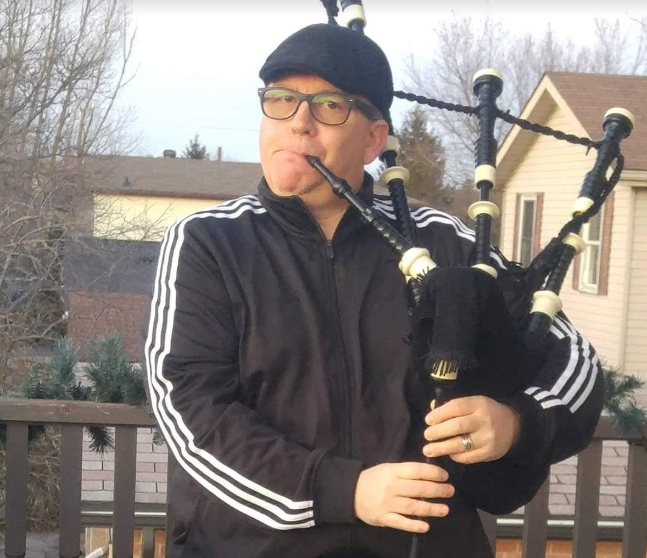 Local Fergus resident Peter Hummel, also known as “Peter the Piper,” can be seen playing his bagpipes nightly from his front balcony in Fergus.

Like many others he is one of many worldwide supporters in the movement to thank the frontline health care workers.

His family is very supportive of his passion, with his wife Sandie Thompson being the one that urged him to get on the balcony and play.

They are now sharing his nightly Live FB videos with local community groups.  The video to watch can be found here.

He is an avid bagpiper: a member of the Fergus Pipe Band and the Sporran Wild Bagpipe. He also teaches bagpiping.

Much of his spare time he can be found practicing for any one of the groups he belongs to.

“All his neighbours are super cool and very supportive of his bagpiping even though it can be very loud to start with,” Hummel said.

When asked why this was important for him, he said “my sister is a nurse, along with another family member who works in the medical profession. Many of my friends are nurses, paramedics and frontline workers.”

Hummel begins his nightly playing at 7:30 p.m. He said about 20 minutes before he plays he will take requests on a live FB video 20 minutes prior to playing.

Summer is a busy season for the piper and his crew with the Fergus Highland Games, weekly Fergus BIA concerts at the Templin gardens, along with being the official Piper of the Riverfest in Elora which draws large crowds.

Peter the Piper finished his playing and left with encouraging words, “anyone who knows how to make 3D face shields please help out if you can!”

He and his family are trying to do their part in the global pandemic.  He especially enjoys hearing people make noise when he plays and liked hearing the banging of pots and pans.

Hummel will be playing nightly at 7:30 pm on his balcony until this crisis ends. He can be reached on kilted_pete@hotmail.com and also on his Facebook as Peter Pipers Bagpiping Services and on Instagram PeterPiper_Official.