This year, the Guelph Community Back Pack Project will move to a pay-what-you-can model and will allow people to 'shop' for what they need
Jul 11, 2018 10:00 AM By: Kenneth Armstrong 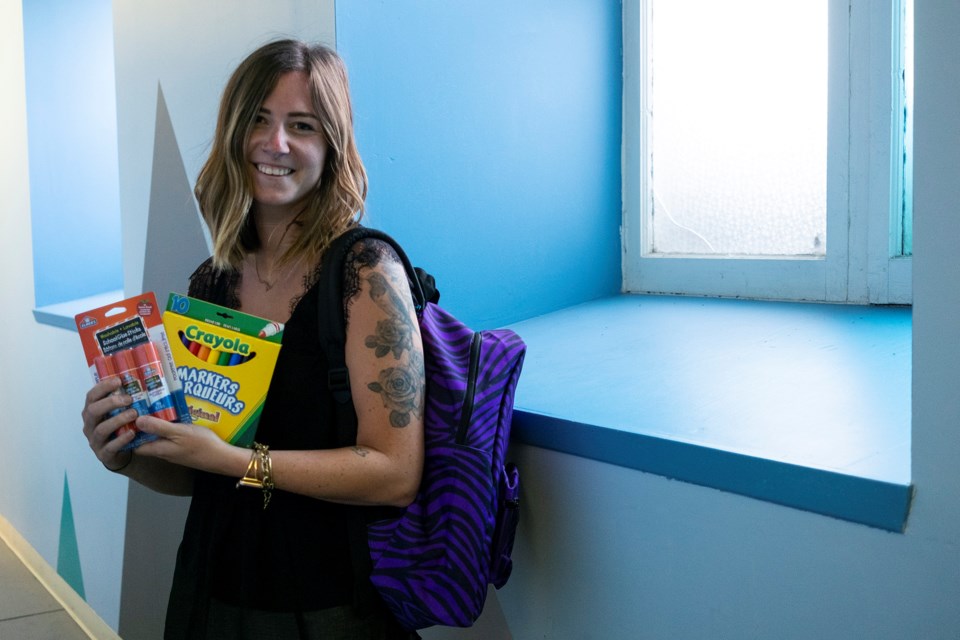 Kristen Tilley, an organizer with the Guelph Community Back Pack Project, poses at Lakeside HOPE House with some of the supplies local kids can expect to find in their back pack when they go back to school this fall. Kenneth Armstrong/GuelphToday

The Guelph Community Back Pack Project is making some changes for the upcoming school year which will offer people in need more options to have their kids ready for the first day of school.

The project has been in existence in Guelph for over 20 years, said Kristen Tilley, operations lead at Lakeside HOPE House.

In past years, the project has provided a full-stocked back pack free to school age kids in the city — packed with everything from glue sticks and paper to geometry sets and scientific calculators.

"What this allows is for them to start school on the right foot, on an even playing field and that their parents don’t have to feel that shame and embarrassment that they have not been able to provide for their kids," said Tilley. "And this also frees up money for things like shoes and the food budget.”

This year, the project is moving to an affordable market style.

"That allows people to come in and pack their own bag," said Tilley. "They will be given a shopping list when they come in for the different supplies that will go with that age group or the grade they are getting into."

It will also allow people to take only what they need.

“We anticipate there is going to be a middle group that maybe doesn’t need a whole full new bag with all of the same stuff — they might just need a few items," said Tilley.

People can still accept the supplies they receive for free, said Tilley, but they can also choose to pay what they can.

The cost of outfitting children for school multiplies for families with more than one kid.

“Many parents have come in and said this is a huge blessing of a program because often times they are shopping for more than one child. Especially when they reach middle school to high school age, these backpacks are costing anywhere from $50 to $150 per bag, so the impact this has on the family is huge," said Tilley.

Any money received from the pay-what-you-can model will go toward next year's project.

People are encouraged to apply to be included in the program in advance at their local neighbourhood group or at HOPE House.

Tilley anticipates that more people may sign up for the program because of the new affordable market and the pay-what-you-can model.

“People are still encouraged to do the application process. That’s just for our sake so we know numbers and what we have to order,” she said.

Applications to be included in the project are being accepted until Aug. 7.

The Guelph Community Back Pack Project is run in partnership between Lakeside HOPE House and the Guelph Neighbourhood Support Coalition, and relies on the assistance of many donors.

Last year, the project was fully funded by businesses and individuals in Guelph for the first time for the 1,100 back packs that were distributed.

"Before that, Hope House would put some of its operating budget toward the project. Last year was the first time it was 100 per cent Guelph funded — both individuals and businesses in Guelph,” said Tilley.

The project's goal for 2018 is to once again be fully funded by donations.

Fusion Homes will provide funds for the 1,100 or so back packs needed for the project. Trillium West Real Estate Brokerage is another major sponsor, noted Tilley.

The back packs will be packed at neighbourhood groups across the city on Aug. 23.

The project is always looking for donations, said Tilley, from corporations or individuals.

Donations can come in the form of money or school supplies, but Tilley asks prospective donators to check with her first for the specific needs of the project.

A list of the current supplies needed for the project are currently on the HOPE House Facebook page.