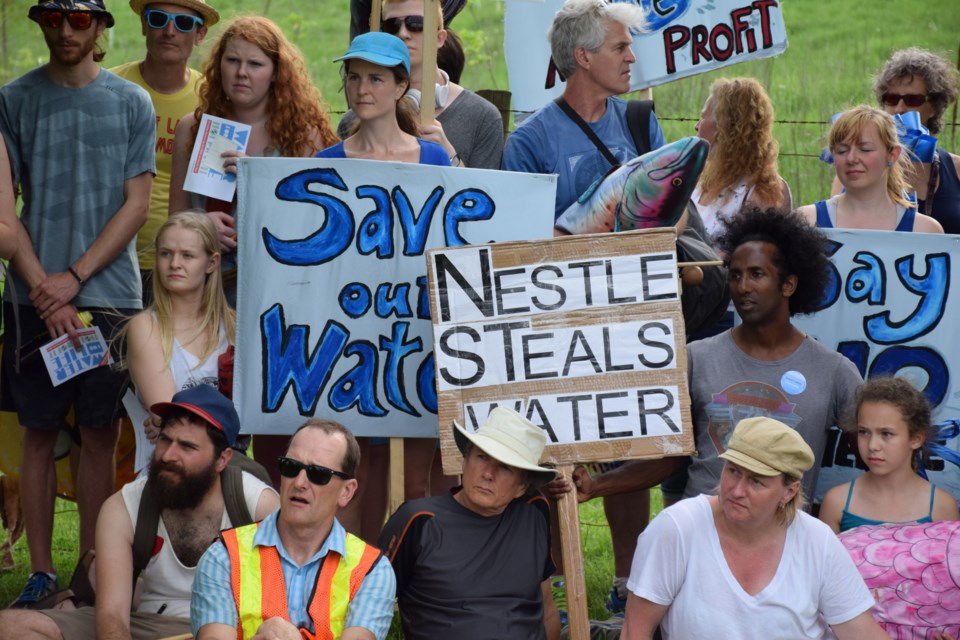 Activists in the Guelph area have been very active this year and are pressuring the government to change rules around permits to take water. GuelphToday file photo

The Government of Ontario has made public proposed changes to rules governing permits to take water.

The province has placed a two-year moratorium on issuing permits for new wells to existing water bottling companies, or permits to new water bottling businesses.

While the company would be able to renew its permit for existing water pumping operations in Aberfoyle and Hillsburgh, under the moratorium a new permit for its property near Elora, the former Middlebrook well, would not be possible within the two-year freeze.

The Canadian Press and the Toronto Star reported that the province took the action pending the study of new regulations that would require stricter scientific requirements for water taking permits.

The new rules, according to the media reports, would include providing a better picture of the overall impact of water bottling on the local water supplies, especially during periods of drought.

A protest movement against water bottling in the Guelph area grew steadily over the summer, as extremely dry conditions settled into the region. Hundreds attended rallies, and thousands signed petitions calling for an end to water bottling.

Under proposed new rules, water bottling companies would also be required to make public through websites the actual amounts of water taken per week.

The fee the province charges for water taking would remain unchanged at $3.71 per one million litres, an amount that environmental activists have said is much too low.

The proposed changes are posted on the Environmental Bill of Rights Registry.

The moratorium is to take effect at the end of 2016 and last through to Jan. 1, 2019. Any renewals of existing permits would be subject to "new stringent rules and restricted to the same or lesser amounts of the groundwater," information on the registry states. The moratorium would prohibit any new or increased use of groundwater in Ontario for water bottling.

"Water is vital to the health and integrity of our ecosystems and communities," the statement on the registry reads. "Drought conditions in some areas of Ontario this summer, projected increases in population and associated water needs, and anticipated impacts of climate change have intensified concerns related to water security in Ontario, particularly among communities that depend on groundwater. These concerns have prompted the Ministry of the Environment and Climate Change to re-examine our current approach to managing water takings in the province, particularly the taking of groundwater for water bottling."

Guelph activist Amelia Meister started an online petition in the spring to pressure the province into bringing in stricter rules for water bottling operations. She is calling the moratorium a political maneuver.

“What I think is that this is a political move to try to get this issue out of the spotlight before the election, and that once the election is over it will be business as usual,” she said Monday morning in an email response.

“What I am hoping for is a stop to the bottled water industry,” she added. “Water should not be sold for profit. Period.”

She said the news of the freeze and the proposed new regulations likely won’t change things in the long run. Nor will the news sway those who see an urgent need to curtail water bottling from continuing to pressure the government into ending the industry.

Mike Schreiner, leader of the Green Party of Ontario, said what Ontarian’s need to realize is that the province’s water-taking rules are still in effect, and those rules are “broken,” he said in an interview.

“This delays any new or increased water-taking, but it weaves in place the broken regulatory framework,” he said. “That’s a problem, and it needs to be fixed sooner rather than later.”

Schreiner said the province needs to change the rules so that municipalities, private drinking wells, and water-taking for growing food take priority over water bottling and aggregate operations.

“The existing rules don’t reflect that,” he said, adding that mandatory reductions during drought should be part of the rules. Currently they are voluntary.

He added that the amount charged by the government for the water that industry uses is ridiculously low.

“I find it appalling that taxpayers essentially are subsidizing water bottling companies and aggregate operations to pump water,” he said. “Because the fees they’re charged only pays for 1.2 per cent of the cost to manage these programs.”

He said Ontarians can not wait any longer to protect our water.

“We’re going to keep the pressure up on the government to act as soon as possible,” he said.

“I am very supportive of the proposal made today by my colleague Glen Murray, Minister of the Environment and Climate Change, that includes a two year moratorium on new water taking from groundwater, and putting in place strict rules for renewals of existing permits," she wrote. "Water is a precious resource. Pressures from summer time droughts and increasing population growth mean we must be diligent to protect it for our future generations."

Sandals said she will "continue to closely monitor the situation," and work with the minister on "long-term, sustainable solutions that put people and the environment first."

The changes are said to be in line with the provincial government’s plans to address climate change impacts, and to ensure a safe and sustainable supply of drinking water.

“We are fully supportive and share the Ontario Government’s commitment to protecting water resources,” said Debbie Moore, President of Nestlé Waters Canada, in the statement. “Through investment in an industry-leading monitoring program over the last 15 years in Aberfoyle and Erin, we have been sharing information with the government and local community.  We will continue to offer this science and transparent data to all stakeholders that share our commitment to water sustainability and conservation throughout this process.”

The company plans to be fully engaged in the consultation process, seeing public consultation on water sustainability, pricing and future planning as extremely important. It will work with the province on a more transparent way to share data on water withdrawal, making information easier for the public to access.

Nestlé acknowledged that because of the two-year moratorium, there will not be a pump test on the Middlebrook water source over this period.