Should the mayor be campaigning with select candidates? Depends who you ask

Guthrie says its engagement with like-minded council hopefuls, others say he has a slate of people he's trying to get elected
Sep 19, 2018 8:00 AM By: Tony Saxon 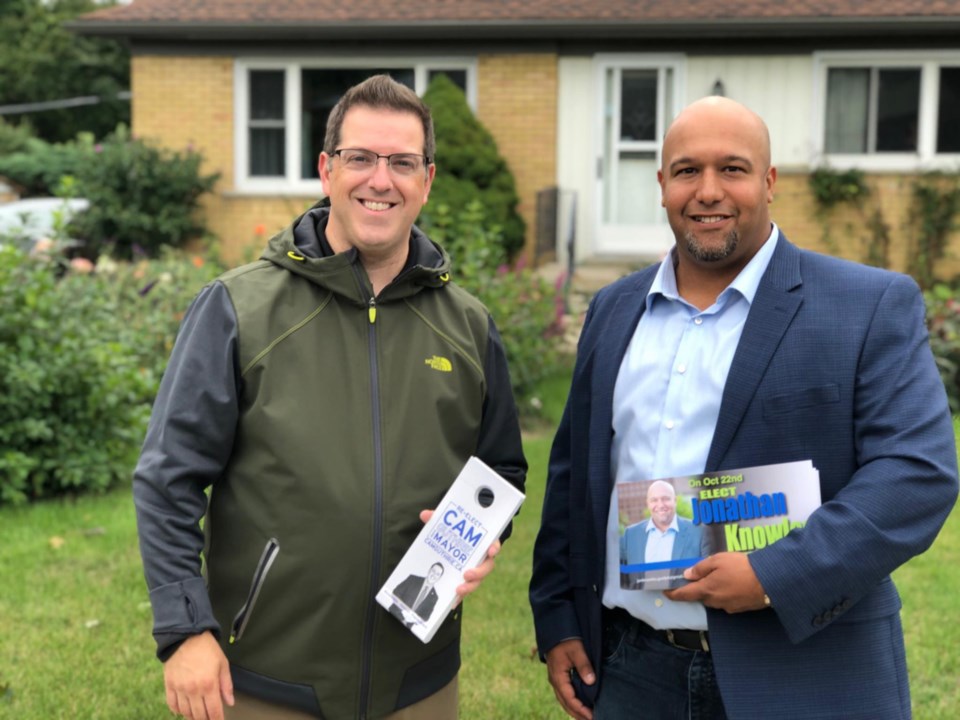 Guelph's mayor says there is nothing wrong with him going door to door on the campaign trail with like-minded councillor candidates.

Others disagree and say Cam Guthrie is running a slate of candidates looking to gain control of council..

The mayor has been active in hitting not only his own campaign trail, but also that of a group of individuals he believes share his belief in what is best for the city and what voters mandated him to do in the last election.

He resents the accusation that he has organized a slate of candidates.

“I’m not going to comment on what some other people are going to try and define anything as,” Guthrie said.

“It’s just going door to door with candidates and current councillors with who I have commonalities with the mandate I was elected for the last term, and the mandate I’m looking for the next term,” Guthrie said.

He said several candidates reached out to him because they shared common goals and ideas, not because they are part of any slate.

Guthrie’s sole competition for the mayor’s seat, Aggie Mlynarz, said it is “very inappropriate” for the mayor to campaign with candidates.

“It reads as an endorsement, which makes the playing field very uneven,” Mlynarz said.

“It reads to me as a group who is interested in their own agenda,” she said.

“I strongly feel that consolidating power before an election truly undermines the roles of the mayor and council and purpose of collaboration … the mayor should be focusing on his own run.”

It certainly is unorthodox. Perhaps unheard of in Guelph according to several long-time council watchers..

“We are not the House of Commons and the mayor is not the prime minister. We have to work in consensus with whoever gets elected,” Allt said.

Councillor Mike Salisbury, an often critic of Guthrie, went even further in his criticism.

“Quite frankly, it’s not new behaviour, because from the day he was elected as mayor he has been divisive and pitted one group against the other, resulting in numerous 6-7 votes and all kinds of chaos,” Salisbury said.

The Ward 4 councillor said the mayor has been “forced into positions of compromise” over the past four years of council.

“He did not have the support he wanted to sort of ‘Rob Ford’ the thing and he’s looking to fix that,” Salisbury said.

“The fact of the matter is, the last four years is child’s play if he’s successful in building his slate.”

Guthrie has been showing up at doors with current councillors Dan Gibson (Ward 1) and Mark MacKinnon (Ward 6), along with six new hopefuls: Jason Dodge and Patrick Sheridan in Ward 3, Jonathan Knowles and Rodrigo Goller in Ward 2, Indu Arora in Ward 4 and Stacy Cooper in Ward 6.

Guthrie said block voting on the current council has at times prevented him from carrying through the mandate voters “overwhelmingly” gave him in the last election.

“There was a lot of 7-6 votes on taxes, on accessible online voting, on affordable housing. Lots of close votes,” Guthrie said.

“The voters already know, and they have known for quite some time, of the opposition that exists and the obstructionist-type of attitudes that have existed on council.

Allt said the notion of block voting taking place on council is “absolute nonsense,” adding that he voted with the mayor on many occasions.

Guthrie said the candidates he has been out supporting “reached out to me, because they are in agreement on common issues that I have been talking about for a long time.”

Ward 3 candidate Dodge said it was a member of Guthrie’s campaign team that reached out to him, not him who reached out.

“It was an offer, I took it. The more people I can engage with and get support from, the better,” Dodge said.

He is happy to have the Mayor of Guelph spend some time campaigning with him.

“It’s fabulous engagement,” said Dodge, adding he would welcome Mlynarz or any other council candidate to spend time on the campaign trail with him.

“I can’t speak for Cam, I’m not even sure I would consider it an endorsement,” he said.

“Ultimately I’m my own person. Council should never, ever be full of ‘yes’ people,” Dodge said.

Dodge said he hates the word “slate” and is definitely not part of one.

Ward 2 candidate Knowles said he reached out to the mayor and asked him to spend some time campaigning with him because he believes he is the best choice for mayor and they are like-minded on several issues.

But Knowles said he makes his own decisions and feels a little insulted to think that after all he has accomplished as a business person and a volunteer, that he would be considered a “cronie” of the mayor.