While on patrol last week, two Guelph police officers purchased a pair of warm socks and boots for a woman walking barefoot in the cold
Nov 25, 2019 11:08 AM By: Kenneth Armstrong 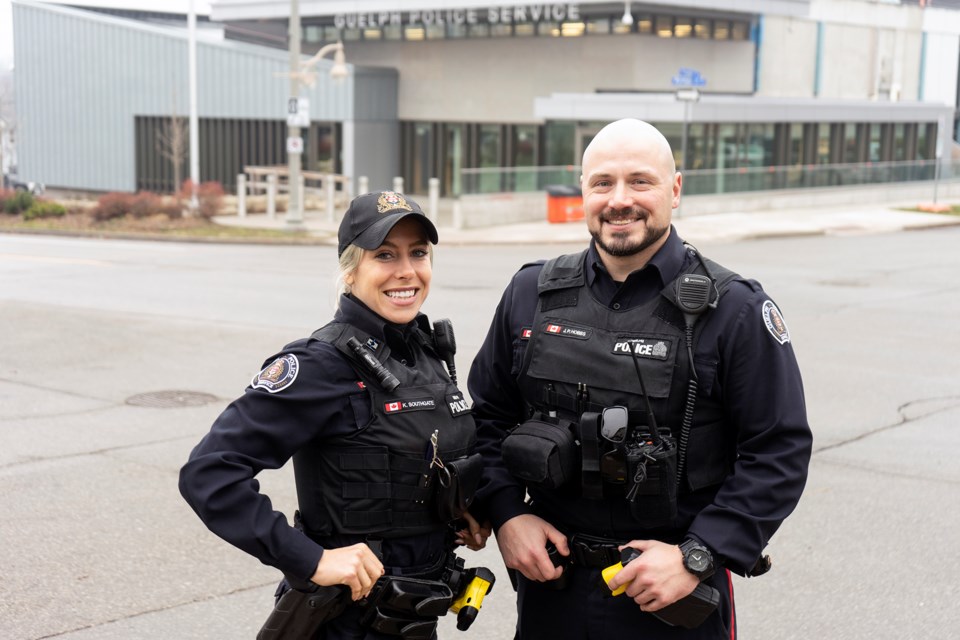 Constables Kristen Southgate and JP Hobbs are being lauded for a small kindness offered while responding to a recent call for service. Kenneth Armstrong/GuelphToday

Last week, constables Kristen Southgate and J.P. Hobbs attended a call at a west end shopping plaza from a concerned citizen regarding a woman walking with a shopping cart in the cold on bare feet.

Southgate said the woman is someone the police deal with on a fairly regular basis.

“They said there was possible mental health issues, based on the things she was yelling and screaming out loud, possible drug use as well, which is the case sometimes with this female,” said Southgate of the caller. “We attended there to check on her wellbeing.”

Hobbs said their first instinct was to give the woman a small amount of money for a coffee and something to eat.

“A lot of times when you’re dealing with people like that, I find a question I often ask them is ‘when was the last time you had something to eat?’” he said.

The officers attention was soon focused on the woman’s feet, which had become purple and swollen from walking on cold pavement.

They first tried convincing the woman to put on a pair of shoes she had in her cart.

“They do fit her, but her feet had swollen up so much because of the weather and stomping around in bare feet,” said Southgate. “We weren’t satisfied with leaving her there just like that.”

The officers asked the woman to meet them across the street at a store where they could get her some warm socks and footwear more appropriate for the weather.

“We pooled our money together and got her a pair of boots,” said Southgate.

The small act of kindness, and countless ones like it, is something officers don’t tend to include in their reports, said Southgate.

The officers did not expect or ask to be reimbursed for the purchase.

It would likely have gone unrecognized, if not for a GuelphToday reporter who happened to be shopping at the same store at the time of the incident.

Both Southgate and Hobbs said the small kindness is not something extraordinary, it’s the kind of thing Guelph Police officers do every day.

“We do it so many times in different ways — whether it be food, something to drink, clothing or taking them somewhere — that you don’t think much of it,” said Hobbs. “It’s bigger to them than it is to us.”

When the officers left the woman after purchasing the boots, the woman thanked them.

“We deal with a lot of crappy days and have a lot of people saying not-so-nice things to us. It’s nice when you do something like that and it’s rewarding,” she said.

Chief Gord Cobey learned of the act of kindness when contacted by GuelphToday.

“This is one of the many reasons I am extraordinarily proud to have the job that I have,” said Cobey. “I think that this is extraordinary and it is one of the countless acts of kindness that our members do for our community every single day.”

The kindness exhibited by the officers that day are a good example of community policing, said Cobey.

“Demonstrating kindness, earning the community’s trust and just doing the right thing for no other reason than it’s the right thing to do — they are not the only two officers to ever do this — it happens all of the time,” said Cobey.

Southgate has been with the Guelph Police Service for about six years, Hobbs will begin his third year in the department in December. Both received community policing as part of their training at Ontario Police College and as new recruits.

Const. Kyle Grant said community policing also takes other forms in Guelph, from officers volunteering on their own time to supporting programs like Kickz Soccer at the Shelldale Family Gateway or the the Cops and Kids campaigns.

“It’s something you are exposed to right away when you start working here,” said Grant.

Southgate said she hopes the recent act of kindness will help to build trust with the woman in the future.

“This is someone we come across often and if it’s one of her really bad days, maybe we come across her again and she remembers the moments that we were there to help her,”  said Southgate.

“I think that trust is the trust in the community that we try to build every day,” said Hobbs. “That’s definitely one satisfaction I take from the job, is being able to help.”