Two-man play, which opens Wednesday in McCrae House backyard, features songs from the era of World War I
Jul 4, 2016 8:30 AM By: Tony Saxon 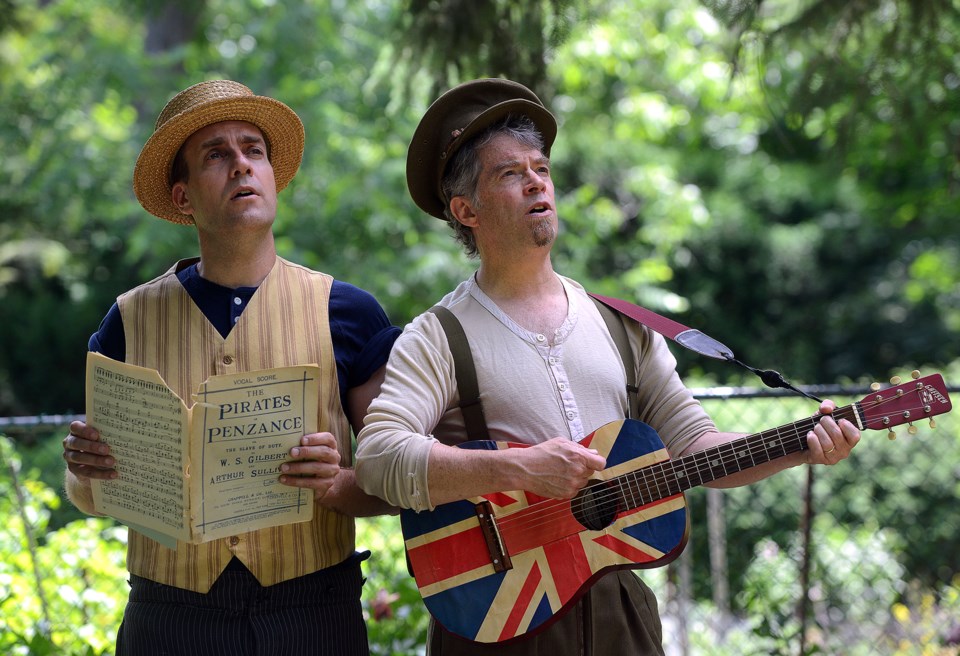 Murray Foster, left, and Mike Ford rehearse the two-man play Sons of '17 at McCrae House on Thursday, June 30, 2016. The play is about a pair of musicians that meet in Guelph in 1917 and features songs from the period. Tony Saxon/GuelphToday

The spring of 1917 in Guelph comes to the grounds of McCrae House starting Wednesday, courtesy of Sons of '17.

The two-man play features Mike Ford and Murray Foster as a pair of musicians that meet to rehearse songs for soldier recruitment.

The show, which runs Wednesday to Saturday until July 23, was originally written by Ford in 2014 but has been updated and adapted for the Guelph and McCrae House setting.

"This show is for Guelph," said Ford.

"It ties in perfectly for Guelph. The show had some McCrae material in it and definitely some elements of In Flanders Fields, but to be at McCrae house its been brought much more to that theme," Ford said.

"The entire show is period. We're acting like it's spring 1917, so anything that's used musically would have already been known to these characters."

Ford and Foster have collaborated on a number of projects since their early days as members of Canadian '80s band Moxy Fruvous. Foster also plays with Great Big Sea.

But this is the first time the two have done such a production, which involved a fair bit of research.

"We do music with some theatrical elements sometimes, and we've both done theatre on and off, but never something like this before," Foster said. "It's hugely challenging."

Ford said he realizes there will lots of knowledgeable people in the audience.

"That's going to be our Waterloo," he joked.

Ford said that McCrae House curator Bev Dietrich was very helpful in making sure the play was as historically accurate as possible.

"She noticed a number of things in the script that needed some revision, so we've done some of that," Ford said.

Val Harrison, supervisor of visitor experiences for the Guelph Civic Museum, said a play that had a six-week run at McCrae House last summer was very successful, leading to this year's show.

"We wanted to do something different than last year," which was more of a scripted play than musical. "We had the opportunity to try this out and we thought it was nice to show the different things we can do in the back yard (of McCrae House)."

Tickets for the 60-minute show, which moves to the Guelph Civic Museum in the event of rain, are $20 and can be purchased through www.guelphmuseums.ca.