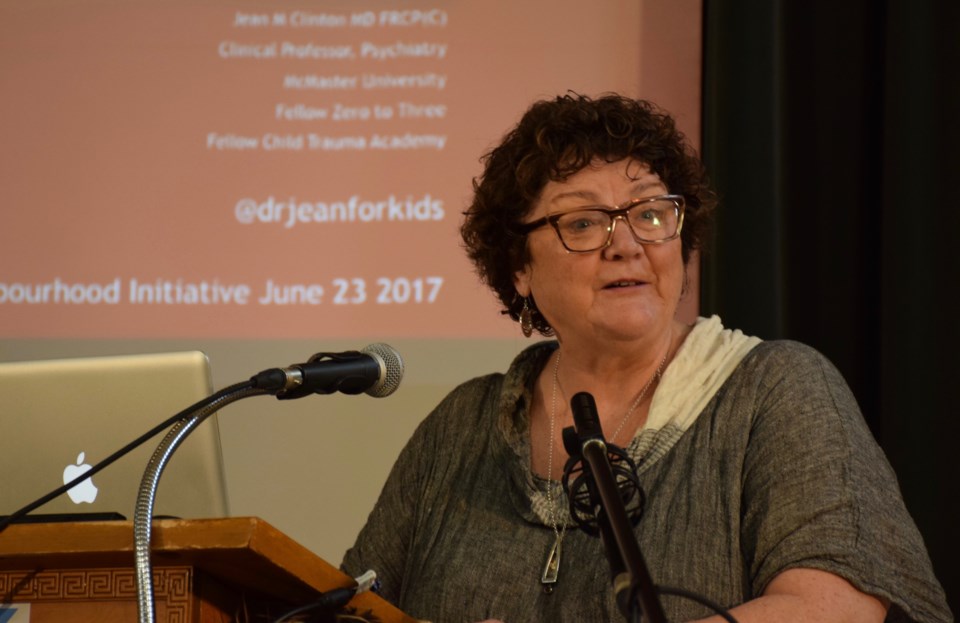 Dr. Jean Clinton was in Guelph on Friday to talk about the impact of Adverse Childhood Experiences. Rob O'Flanagan/GuephToday

There’s a name for the many traumatic experiences children go through, experiences that affect the development of their brains and influence their health and behaviour, often for a lifetime.

They are called ACEs (Adverse Childhood Experiences) – experiences like sexual or emotional abuse, neglect, witnessing your mother being treated violently, being the child of a parent with an addiction, seeing your parents get divorced, and others.

These traumatic experiences are markers for all kinds of negative outcomes in childhood and beyond, said Jean Clinton, child psychiatrist and professor in McMaster University’s Department of Psychiatry and Behavioural Neurosciences. Clinton was the keynote speaker at Call to Action, a daylong event focused on ACEs – an exploration of what is and can be done in a coordinated way to help those affected by such experiences.

The outcomes of ACEs include a higher likelihood of developing heart and liver disease, cancer, stroke and mental illness, attendees hear during a video on the subject. Contemporary research shows the more ACEs one experiences at a young age, the higher the risk of serious health problems in later life.

Guelph, Clinton said, is exemplary for the coordinated approach it is taking to focus on the issue and help those affected by childhood trauma.

In an address that was at times humorous, Clinton indicated that ACEs are very common. One study found that 21 per cent of subjects had experienced sexual abuse in childhood, and 19 per cent were raised in a home where one parent had a substance addiction.

There is a change coming in the way ACEs are talked about and treated, she said. The question, ‘what is wrong with you?’ is being replaced by ‘what happened to you?’ That marks an attitudinal shift that sees childhood trauma as being at the root of a great many behaviours and health problems.

Health professionals are beginning to screen for ACEs, and schools are becoming more trauma informed.

During her hour-long presentation at Dublin Street United Church, Clinton said it is now clear that a child’s brain is formed by experiences in the early years. Some forms of abuse, neglect, or household dysfunction shape the brain, wire it to respond in a certain way based on the stresses experienced, she said.

By focusing on early life and ensuring that a child is safeguarded against ACEs, a wide range of problems can be avoided throughout life, and health care spending reduced.

“The negative stuff in childhood interferes with biology,” she said, adding that genetics plays some part in how we develop, but so does our experience. “The brain is built by experience. When neurons, and there are trillions of them in the brain, fire together, they wire together.”

It is vital to be mindful of the long-term impact stress has on a child, she said, and to take steps to guide them against it. As a community we need to help families avoid those traumatic influences.

ACEs elicit intense stress responses in a child, Clinton said, explaining the neurological effect. Human biology is wired to be on guard for threats. The amygdala part of the brain, which reacts quicker than thought, is responsible for the fight or flight response.

There is positive stress that helps people achieve peak performance, but there is also toxic stress that is harmful to health and wellbeing. It manifests in children and adults as irritability, poor memory, difficulty focusing, trouble with critical thinking, and increased anxiety.

When the amygdala is engaged, the hippocampus, the part of the brain that controls learning, is offline. But the learning part is essential for building resilience.

“If we truly want to make a difference in the life of children we have to do something about the stress in the lives of the adults in their life,” Clinton said. Resilience is not a gene you are born with, but has a lot to do with the conditions one lives under.

“We can change our biology,” she said. “Our biology is not destiny.”

County rejects cost-of-living pay raise for non-union employees and freezes councillors' pay
Sep 24, 2020 8:00 PM
Comments
We welcome your feedback and encourage you to share your thoughts. We ask that you be respectful of others and their points of view, refrain from personal attacks and stay on topic. To learn about our commenting policies and how we moderate, please read our Community Guidelines.