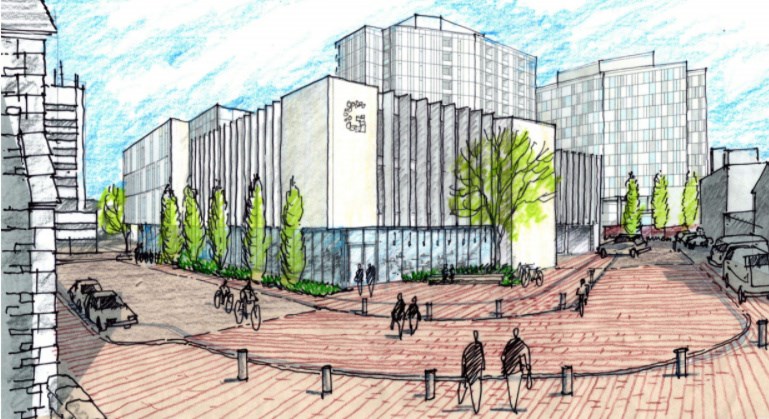 The time to build a $62 million new central library, part of the Baker District project, is now.

That’s the message delivered to city council time and time again during a committee of the whole meeting on Monday.

“Councillors, I implore you, be on the right side of Guelph history,” Rosanne Morris, one of 32 registered delegates, told council members. “The new Guelph Public Library needs to be built according to the new plan. It’s time to act.”

The Baker District proposal, with a total city price tag of between $84.3 million and $89.3 million, involves the redevelopment of the Baker Street parking lot and nearby properties in partnership with Windmill Development Group.

It includes a new four-storey, 88,000-square-foot central library in a standalone building at the south end of the site, as well as two 15-storey buildings with a mix of commercial and institutional space, along with 300 residential units.

If no institutional partner is found for the base of the northern building, that space will be converted into additional residential units.

“A library is an essential resource whether you are five years of age or 95,” said Ron East of the Guelph chapter of Council of Canadians, adding the new library is designed to “enhance mental capacity and creativity for generations to come.”

The plan also includes four public spaces connected by a series of pedestrian paths allowing flow from north to south and Baker Street to Wyndham Street North through a variety of routes. Public spaces are to include tiered plantings and seating opportunities among the landscaped design.

“Downtown businesses will be so vibrant and growing. It’s a no-brainer,” commented Lisa Kelso of the project, echoing several speakers in highlighting the impact of libraries on improving quality of life. “The modern libraries of today are community hubs. … They’re essential parts of downtown.”

If ultimately approved, the new central library project will result in a 0.39 per cent per cent tax increase for a 20-year period starting in 2021 in order to cover $19.7 million of the library cost that isn’t covered by development charges.

“My neighbours and I believe this cost is worth it,” commented Ward 6 resident Heena Mistry, who identified herself as a professional historian. “Future generations will not look kindly on your decision to delay this further.”

Construction of the new central library is slated to begin in 2022.

The current central library, constructed in the 1960s, is about 29,000 square feet in size and, as council heard repeatedly, doesn’t meet the needs of the community into the future.

“Council has been debating the replacement of Guelph’s completely inadequate and now derelict main library for 30 years,” said Virginia Gillham, chair of Friends of the Guelph Public Library. “Every time the decision is delayed, the cost goes up.”

Baker District is to include two levels of underground parking, a combination of public and private space. The precise quantity isn’t yet determined, but a preliminary review identifies 430 needed spaces. A previous version of the plan called for 548 parking spots.

Marty Williams, chair of the Downtown Guelph Business Association, decried the parking plan, stating it “simply defies logic” to not include more, but noted his board endorses the project overall.

“Build as much as possible. That’s what we need to make the library and other new uses a success,” he said.

Several changes have been made to the plan since it was approved by council last year. Key among them is to remove the library from the base of the northern 15-storey building and put it into a standalone facility, previously planned to house an institutional partner, as well as the elimination of a road running through the site and the addition of two more public spaces.

The project is also set to fill a smaller footprint – two Wyndham Street North properties have been removed.

Resident Doug Minett questioned the need for council to vote on the project again.

At the end of Monday's committee of the whole meeting, council unanimously agreed to refer the matter to a special meeting on Wednesday evening, when a decision on the fate of the project is expected.

At that meeting, council will be asked to endorse or deny the altered layout and cost, as well as $16.1 million to be included in the 2021 budget for site servicing, environmental/archeological remediation and the outdoor public spaces.

Approval of the staff recommendations would also see the Guelph Public Library Board instructed to report to council with a “detailed operating budget projection” by June, with an estimated tax-supported operating cost of $3.5 million for public components of the Baker District built into the 2021-2024 operating budget and forecast.

“I pay school taxes because I want to live in an educated society,” said Ze’ev Gedalaf, noting he doesn’t have children. “Libraries are an important part of that.”

Should council approve the project on Wednesday, city staff will be directed to work with Windmill to revise the Urban Design Master Plan and update the library design for a stand-alone building. Formal council endorsement of the master plan would be considered at a future meeting.

Speaking out against the new central library as proposed, Gord Riddle said the project has experienced several “critical failures” compared to what was first envisioned and should be reconsidered.

“We, as citizens, deserve better than this,” he said, referring to not having library frontage on Wyndham Street, lack of geothermal technology, reduction in parking and absence of an institutional partner. “The city owes it to itself to optimize the Baker District.”

The City of Guelph applied for a joint provincial and federal funding stream up to $36.6 million toward the then-estimated $67 million price tag for the new library, but was not selected.