'We can build homes for people without destroying homes for wildlife:' MPP Schreiner

Bill 108 will come up for a third reading this week, and opposition members are encouraging MPPs to vote against it
Jun 4, 2019 8:30 PM By: GuelphToday Staff 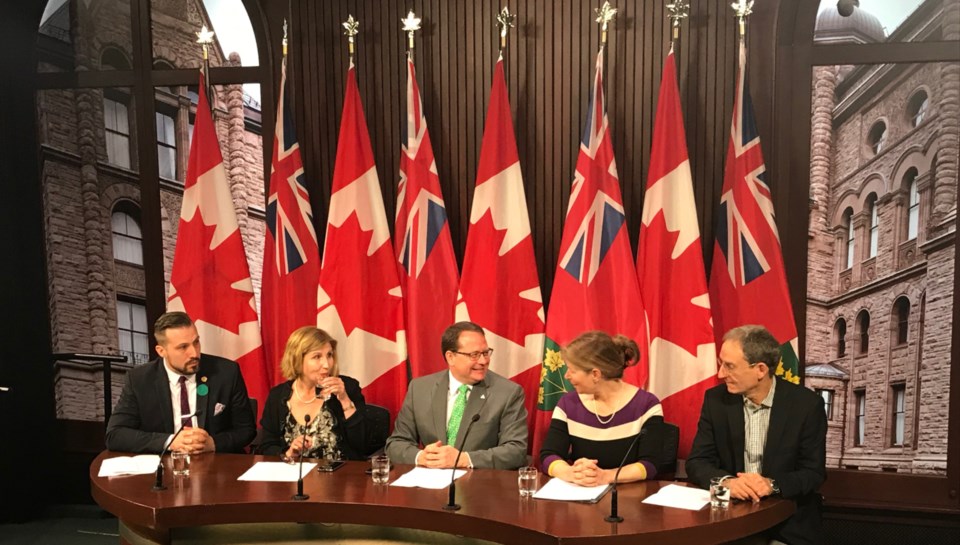 In a show of cross-party unity, members from Ontario's three opposition parties held a joint press conference calling on government MPPs to vote down the controversial Bill 108. Supplied photo

At the press conference, the MPPs asked the PC government to do the right thing for Ontario wildlife by voting against Bill 108 this week.

“Ontario used to be a leader on conservation and biodiversity. We deserve a plan for endangered species that values scientific integrity and the precautionary principle. I’m calling on the government to press pause on this legislation, listen to the evidence and reverse the changes made in Bill 108,” said Liberal MPP, Nathalie Des Rosiers.

“It’s time to put partisanship aside and put the public interest first. And I’m proud to stand with other parties, municipal leaders, citizens groups and responsible developers who are saying that we can build homes for people without destroying homes for wildlife,” said Green MPP, Mike Schreiner.

The three MPPs were joined by a conservation expert who remarked on how the changes to the Endangered Species Act undermine clear scientific guidance and represent an attack on vulnerable plants and animals.

“Bill 108 will grease the wheels of destruction, making it easier and faster for sprawl developers and industry to dodge legal requirements to protect endangered species and their habitats. The proposed changes will delay, limit and remove the safeguards that the law is intended to provide for species at risk, many of which are in steep decline,” said Dr. Anne Bell, Director of Conservation with Ontario Nature.

They were also joined by a sustainable housing developer who spoke about solutions that accommodate new development growth without encroachment on prime agricultural land or sensitive habitats. “We have a triple bottom line approach (people, planet, prosperity) to development — on under-utilized urban land, on brownfield sites, near transit hubs, and in the “missing middle” — achieving densities that support transit, lower our carbon footprint and provide compact, livable and healthy communities while preserving our natural heritage: open space, habitat and agricultural land,” said Alex Speigel, Partner with Windmill Development Group.

Bill 108 will come up for third reading this week after only a day of committee hearings that precluded the vast majority of groups from sharing their input and expertise.