Guelph Prep Junior Gryphons will include players recruited from around the province
0
Aug 18, 2016 6:00 PM By: Rob Massey 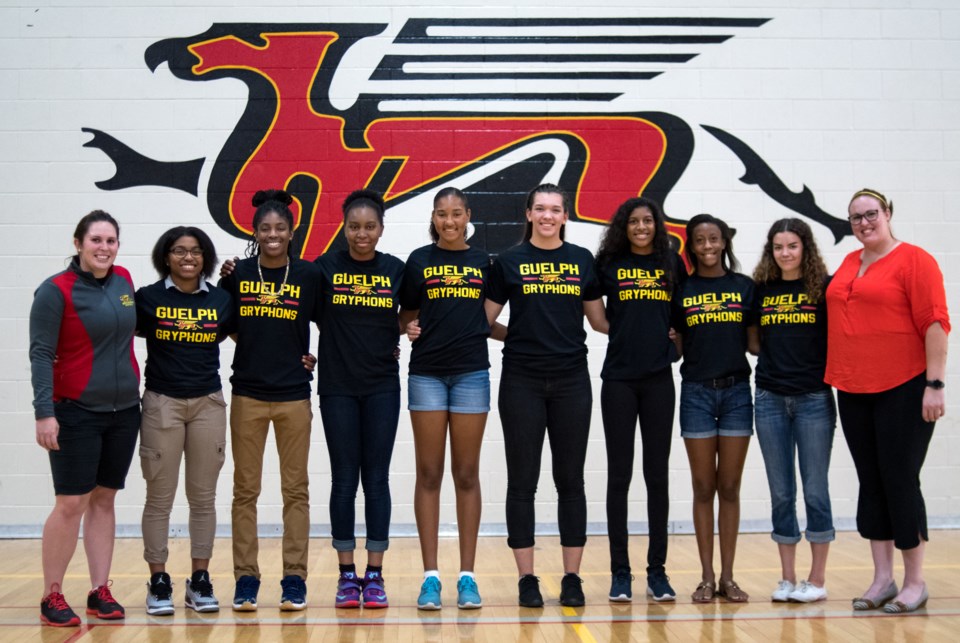 Eight members of the newly-formed Guelph Prep Junior Gryphons got a chance to meet their new teammates Wednesday afternoon at the University of Guelph.

Guelph Prep will be one of the eight teams competing in the inaugural season of the Ontario Scholastic Basketball Association's girls' league starting this fall.

The Junior Gryphons will be based at both Bishop Macdonell Catholic High School and the U of G. The players will get their schooling at Bishop Mac as part of the elite athletes classes at the local high school, they'll be put through their paces at practices and play their home OSBA games at the athletics complex at the U of G.

Karen Bremner will be Guelph Prep's head coach and the director of basketball operations.

"I stopped coaching rep for a long time because I wasn't completely sold on all of the infrastructure for highly-targeted athletes," she said. "I didn't think that it was the best fit for them so I was kind of waiting for something that was forward-thinking and had the best interest of them at heart. This was the best thing that I could possibly imagine aligning myself with."

Her connections with Bishop Mac, where she guided the Celtics to a few OFSAA AA championship tournament appearances before leaving to be an assistant coach at the provincial level, helped in establishing the Guelph Prep program.

"I'm certainly not going to bring kids to a school that I can't actually vouch for their credibility," Bremner said. "This situation just kind of worked out perfectly."
Guelph Prep, which will be run under the Guelph Youth Basketball Association banner, has nine players registered for its first season and will add three more before the campaign begins. That could include two more locals.

Players registered are Mya Iriah, Murielle Mpiana and Keanna Samuels of Brampton, Jada Grannum of Mississauga, Shanese Miller of Kitchener, Mackenzie Obermayer of Hanover, Jennah Taylor of Sarnia, Alicia Higgins of Fergus and Dianne Priamo of Guelph. Trish Taylor of Sudbury and Jen Nadalin of Guelph are the assistant coaches.

"I think it's an opportunity to train a lot more frequently and to go to school with my teammates is a really good experience," Priamo said.

Priamo, 16, will be the lone player on the team who'll be familiar with the layout at Bishop Mac as she's been a student there for three years. She'll likely be the one her teammates turn to for in-school directions during the first couple of weeks of school.

"I feel that I'm really fortunate that they chose to run the program out of Bishop Mac," she said. "I'm excited to be able to be a leader in that way on the team."

At 13, Higgins will be the youngest member of the team. She was planning to begin Grade 9 at St. James next month.

"I just think it's a really good experience for all of us and it's a good way to meet new friends and just get to know one another, have fun and just do what you love, play basketball all day," she said.

Getting to play and practice on a university court is also a big draw for Guelph Prep. For some of their home games, they'll be the first game of a tripleheader with the University of Guelph's varsity squads.

"That's really big for me," Higgins said. "All those people that are watching, I just feel like I'm part of something and part of a family. It's just really amazing and I hope to do it for my four years of high school."

"It's a bigger court and it gives you kind of a taste of what university basketball is going to be like, especially with the schedule," Priamo said. "It's a really exciting opportunity."

Other teams in the league are King's Christian Collegiate of Oakville, Southwest (Furfaro) Academy of London, TRC Academy of Brantford, Bill Crothers Secondary School of Unionville, Ecole Secondaire Louis-Riel of Ottawa, Lincoln Prep of Hamilton and Durham Elite of Oshawa.

The league's season is to start in November.

Gryphon athletic banquet moves online
Mar 26, 2020 3:00 PM
Comments
We welcome your feedback and encourage you to share your thoughts on this story. We ask that you be respectful of others and their points of view, refrain from personal attacks and stay on topic. To learn about our commenting policies and how we moderate, please read our Community Guidelines.